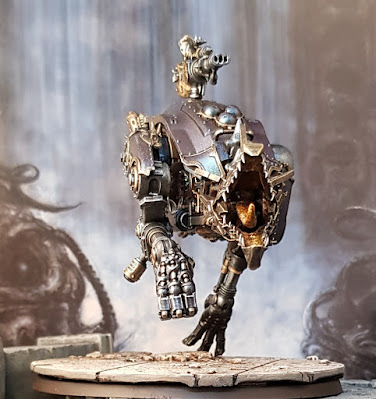 And so my descent into the howling interstices of the Immaterium continues with the latest heretek Warglaive fresh off the assembly line.

It's not quite freefall; I just bought the Primaris Apothecary model which is so good I daren't convert it.  I might finally pluck up the courage to paint a marine in white armour.  A crisp marine would be just the right palate cleanser after this fella. 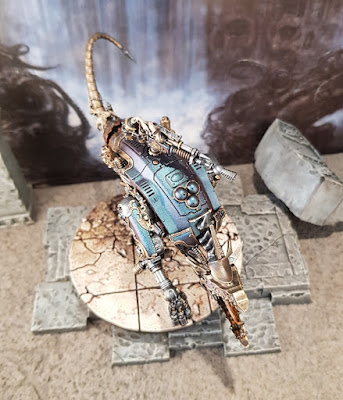 The beast is an attempt to placate Grandfather Nurgle.  I have a feeling it might not be fecund or tumescent enough for the Great Plague Lord who likes his corruption bloated.  If machines could have weeping sores however, I hope they would look like this.

I did another glory hole 360 video and you can see the poor old turntable twitching and wobbling away.  I think I've worn it out.  Forcing it to rotate endlessly with hefty models and weighted bases balanced on top has probably overstrained the mechanism. 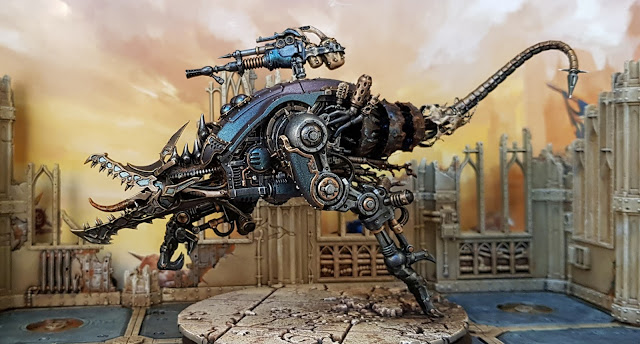 I can hear something grinding inside it now as it rotates and the bottom has come loose.  It's probably time to get a new, industrial strength turntable that can take the weight of a spitting cat.  That could provide a lifetime of fun.

Speaking of animals, I not sure what I was attempting here.  Something raptorlike and Dinobot for sure.  I think it ended up a bit ratlike however, skittering through the wasteland.  Spewing filth from strange, ventral orifices like a 41st millenium muck spreader.  I'm not sure you'd want this particular bio-mechanical horror to fertilize your crops.  Not unless you were hoping for a very grimdark version of Jack and the Beanstalk outside your window when you woke up the next morning. 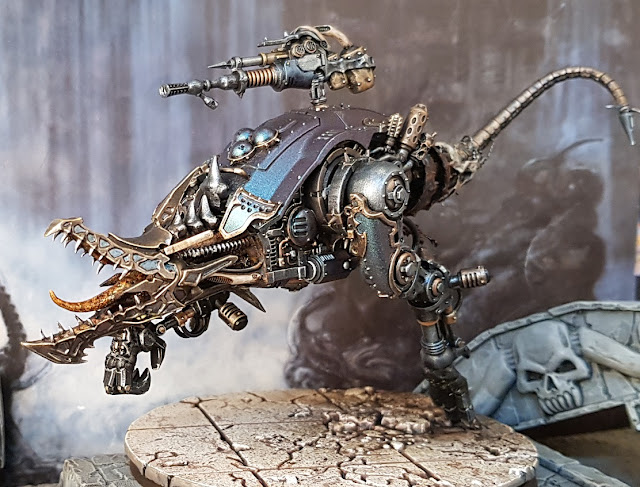 I've been dicking around with the model for months now.  When I finally realised that I was never actually going to finish it, I just stopped.  I painted the rim, washed my brushes and started taking photos.  I think it was the right decision really, I was in danger of over-egging the pudding.  GW Technical paints are too much fun.  Whoever invented Nurgle's Rot deserves a medal in my opinion, but you've got to stop short of pouring the damn stuff all over the model. 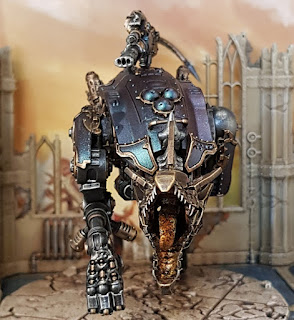 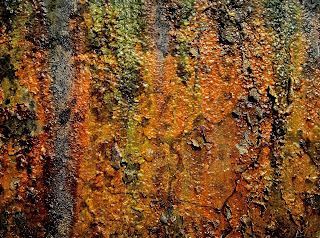 I wanted the front to be clean with the Warglaive becoming more and more messed up along its length.  The base would reflect that too.  But I found some pictures of wet rust online and really wanted to give it a go on the tongue.  I liked it so much I did various bits and pieces in the same way to balance it out. 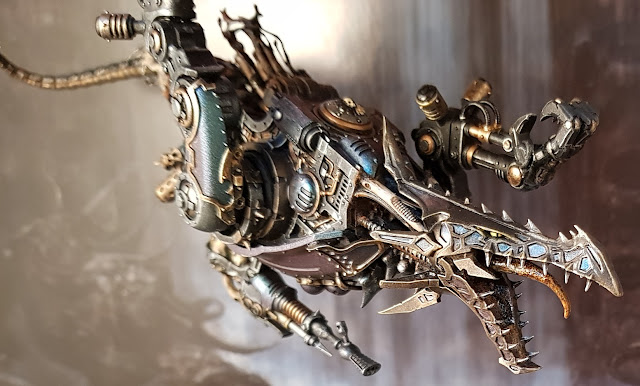 The pinned foot has held up well, surviving an accidental kicking across the garage floor after being dropped.  I wanted a distressed look but this was taking it a bit far. 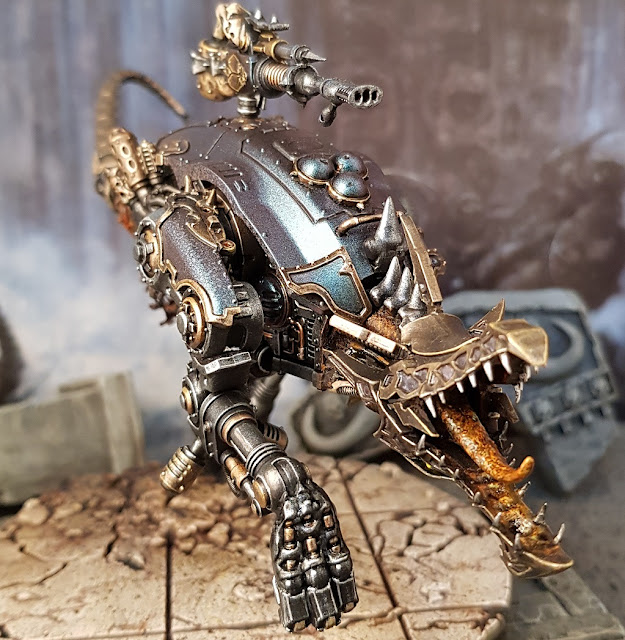 I really liked the simple, almost stylised mark of Nurgle which was donated by Jordan at some at some distant point the past. And there's a little fly on the side of the weapon.  That's about it for obvious signs of devotion to the god of poor hygiene . 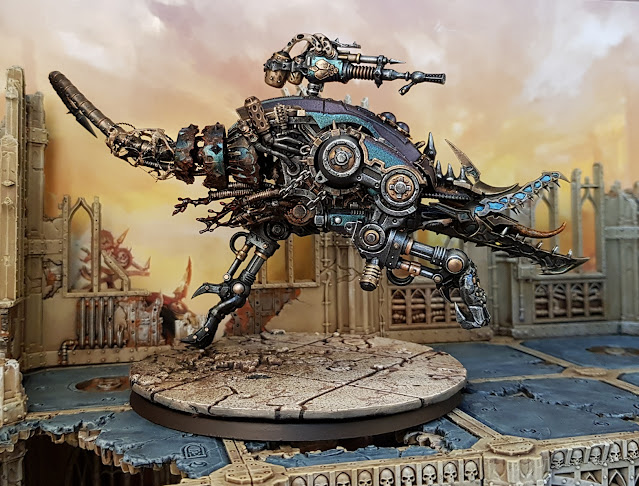 I think the back end is much more nasty and I experimented with all sorts of weirdness here.  Skin on barbed wire.  Cracked, leaky and rusted pipes.  Noxious fluids spilling from a mess of tubing on the underbelly. 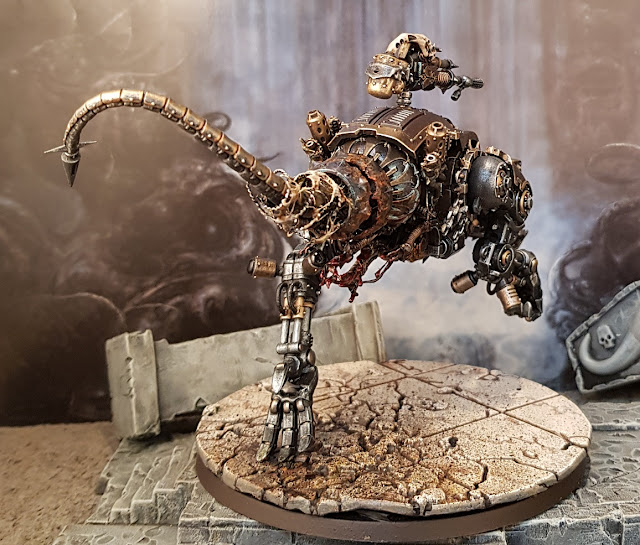 I think I'm finally channelling my inner Covid.  I just sprayed a succession of technical paints, glazes and contrast paint on the base with a toothbrush.  I was making a mess and loving it.  It took about 10 minutes and is a good reminder that you should never skimp on the base.  And always paint your rims to signify that you are finally done with it! 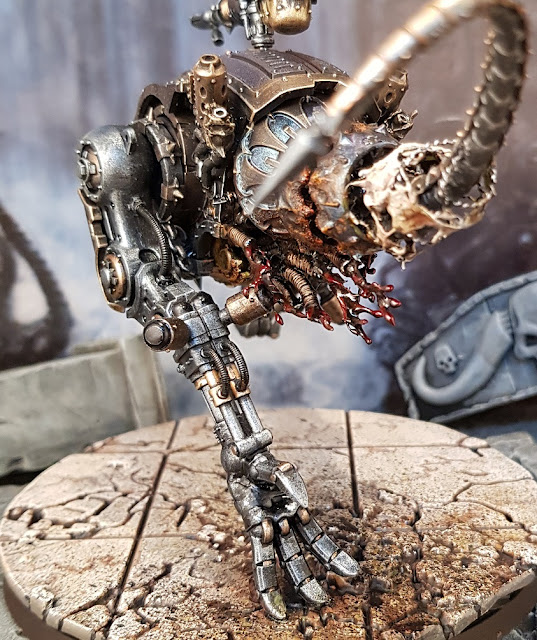 The bloody stools shooting out of its undercarriage and skin on the barbed wire were lovingly created with cat hair, Nurgle's Rot and Blood for the Blood God.  I'm definitely not tired of that technique yet. 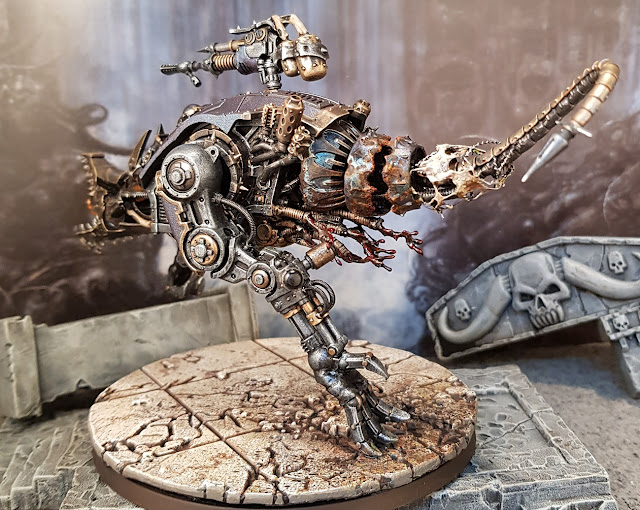 Finally a shot of the whole gang.  Well, the whole gang so far.  The Budgie of Slaanesh needs to be tackled next I suppose.  It's not very Slaaneshi now that I think about it and doesn't really fit with these three anyway. 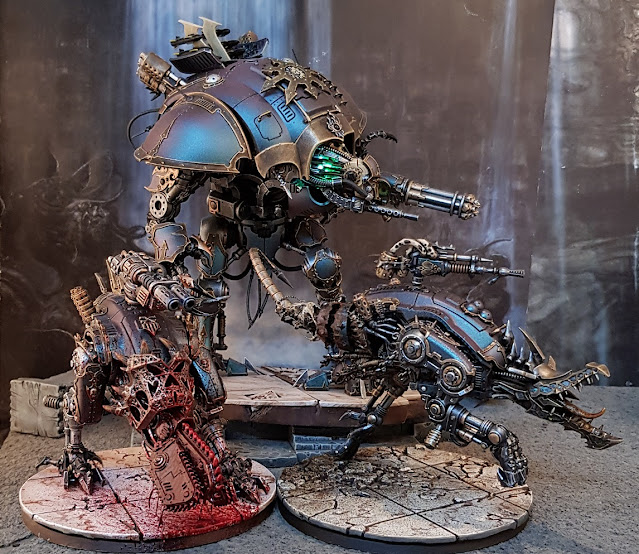