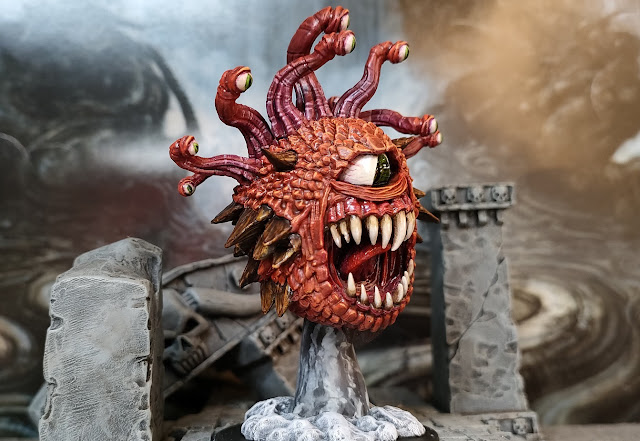 Well that was a bit of a hiatus.  Nearly a year since my last post and I didn't do any hobby at all until the Christmas break.  I suppose I could put it down to Covid blues but I've got nothing to whinge about really.  I don't even know anyone who has tested positive apart from friends and relations in the UK.  I've had more or less unrestricted movement (domestically) for months.  New Zealand has weathered this storm pretty well but at the end of the day we've only stemmed the tide, not stopped it.  The spectre of plague looms over my head.  I can't quite put my finger on it, its just a vague feeling of impending doom (Climate change? Tongan volcanoes? Northland tsunamis? Listening to too much Creedence Clearwater Revival?).  I quit my lucrative contract job before the break and landed a permanent, salaried position with a bank, which offered free life insurance, a discount on my mortgage and pension contributions in the package.  If I didn't know myself better, I'd say I was running scared.  Or getting old.  Who knows, I might become a doom prepper. 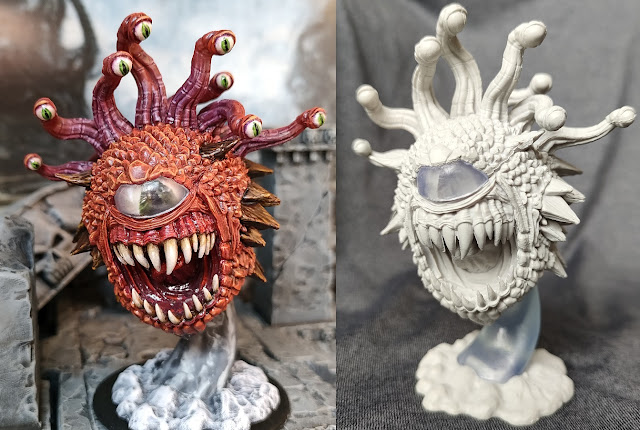 Anyhoo, this was a Christmas present from my son, a 'WizKids D&D Beholder'.  He knows I've always liked these beasties and it was a subtle reminder to get back to the hobby station.  Even my ex-wife asked why I'd stopped painting. 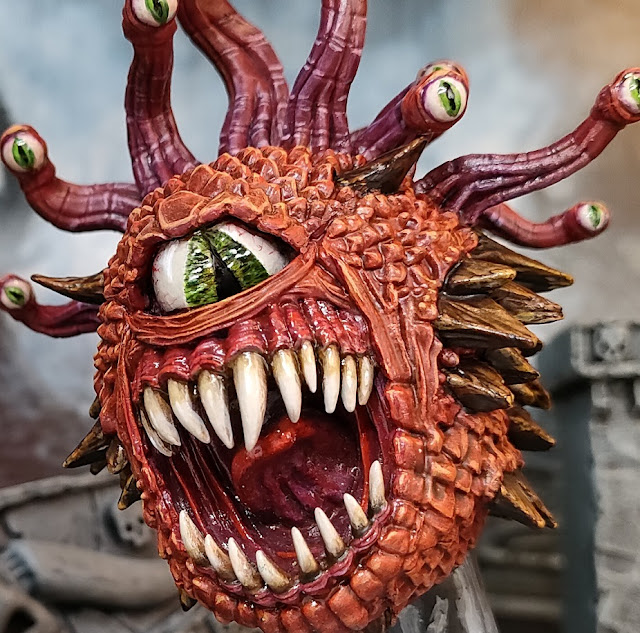 It is a cool model.  Nothing says D&D quite like a Beholder.  Well, apart from a Dragon I suppose.  Or a Gelatinous Cube.  Or a Hobgoblin.  Or an Umber Hulk.  Come to think of it, trying to pigeon hole D&D like that flies in the face of all that it stands for.  But it's a very familiar monster in the manual.  The kit comes with several alternative options; different eye stalks firing various bolts of nightmarish magic.  I didn't use them in the end, preferring the unsettling gaze of eleven floating eyeballs. The plastic isn't the sort you can use polystyrene cement on and there were some hideous mold lines.  Who puts a mold line directly through the surface of an eye ball, for God's sake?  But it cleaned up really well and has some lovely detail. I'm such a bloody GW fanboy, I rarely look at other products, which is a shame. 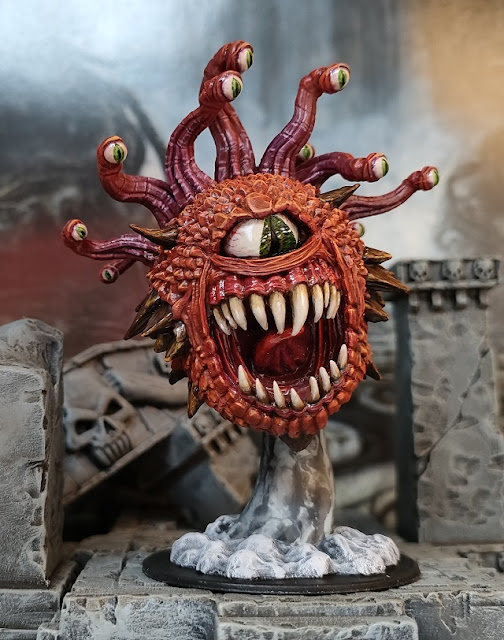 The iris and pupil are sculpted in an inverted way, which I found fascinating.  At first I wasn't sure why the sculptor did it like this.  But it models the parts of the eye much better this way.  It certainly makes the pupil look more realistic since it properly mimics the shape, which is to say, a hole.  The kit comes with a translucent 'cornea' which slots over the whole eye socket.  I experimented but found that I preferred it uncovered.  I could have merged it more seamlessly around the edges than in the photo but I didn't want to wreck the paint job, so I just got rid in the end. 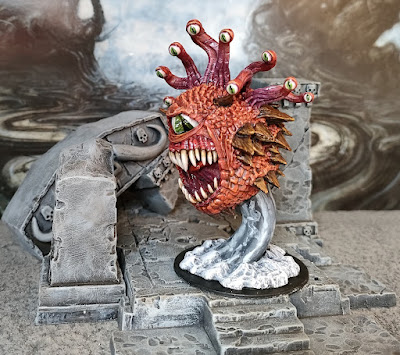 The stem which connects it to the stand is translucent plastic too and I don't think you are supposed to paint it.  I got a bit lazy and couldn't be bothered basing so I tried to make it a 'pouf' of smoke.  Sort of like a magician's flourish, or an ungodly fart.  It turned out alright.  You've got to keep experimenting. 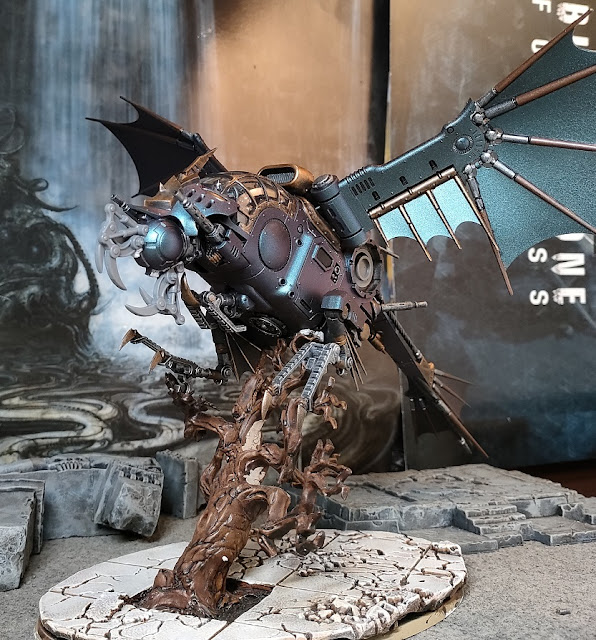 Now that I'm (sort of) in the mood, the spectre of my painting backlog looms over me.  I started on the Fusilave which was only half finished for the Maelstrom tournament back in 2020.  Man, I've really gotten out of the hobby habit.  As soon as I started painting, I decided that I didn't like it.  But instead of drifting back to the Playstation for another 2 months, I hacked its nose off and replaced it with those Mechanicus crane-block, crab-claw things that came with the Galvanic Magnavent terrain kit. 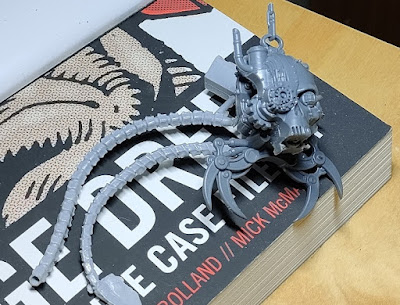 I think the spider skull block-and-tackle looks awesome and was very reluctant to cut it up when I opened the box and got a good look at it.  I was really careful with the surgery however and I can still use the rest of the parts for some pure folly project in the future.  I'll just roll up some greenstuff mechadendrites to patch it up.  Maybe even a bit of Necron tech.