The budgie of Slaanesh 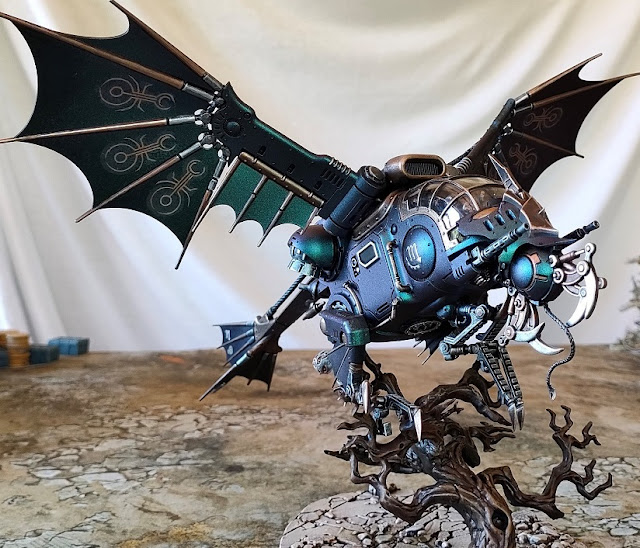 Look, up in the sky! It's a bird! It's a plane! It's a hellforged abomination!

Originally built in the Antares shipyards (Alpha Scorpii, not Ultima Segmentum), this craft was designated as a geosampler and general scout for a small explorator fleet.  The tectomagnic bombs were replaced with seismic probes and the nose was remodelled to collect samples and crack open sections of rock. Thus equipped to unveil the secrets of planetary composition, it joined the intrepid voyage to unknown worlds.  But that was centuries ago and the entire flotilla was lost to the Warp in its initial translation. 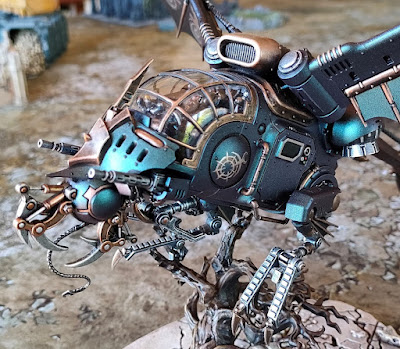 Subsumed by unnatural forces, the brave machine spirit of the Archaeopter was perverted.  Its armourers and adepts, no longer bound by Imperial taboos on xenos technology, subjected it to further blasphemy.  As a final insult/accolade, they named it 'The Budgie of Slaanesh'. 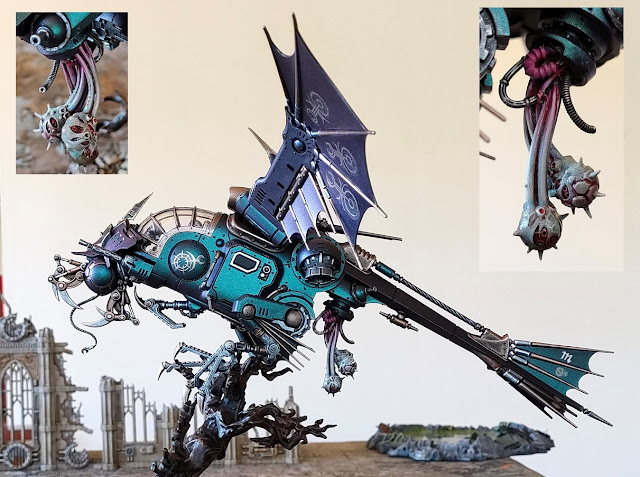 It's supposed to be a Mechanicum version of the Archaeopter Fusilave.  I haven't played 40k since 2020 so I no longer feel constrained by the bounds of WYSIWYG.  I exchanged the Fusilave Bombs for a trio of Tyranid spore mines.  Not sure it feels more Chaos this way, but it definitely feels weirder.  A bizarre, prolapsed payload. 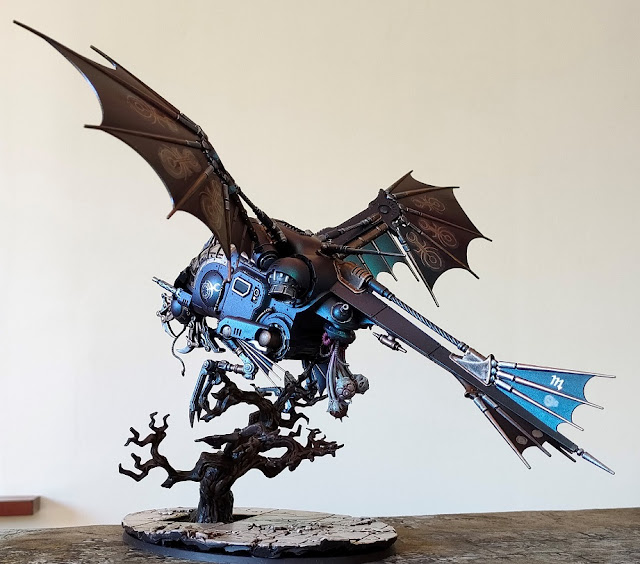 From here on in, I'm just going to build what I like and stop worrying about base sizes, weapon loadouts and the correct decals to apply.  I'm also not going to paint 97 of the buggers in order to play a handful of games and then abandon them in the never ending pursuit of cheese (oh man, I'm still salty about those termagants!).  On the flip side, without any time pressure or clearly defined goals, I'll probably backslide into Nurglesque sloth again. 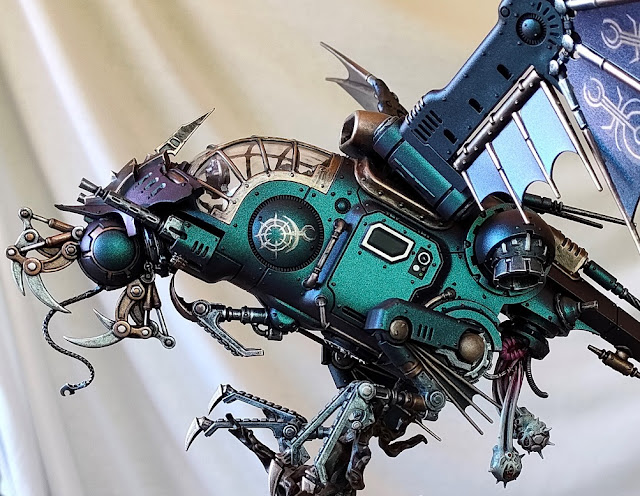 Oh well, at least I'm not rotting away at my gaming machine playing make-work MMOs or horribly grindy and bloated Action-RPGs. For now, at any rate.  My Hobby/Gaming/Lore triangle has become very lopsided these days and I mostly just listen to bolter-porn audiobooks. I still love the models of the Grimdark though so I'll find my groove eventually. 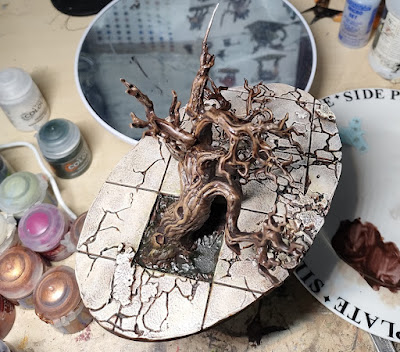 I should have finished this piece mid-week really but the ideas started to flow and I enjoyed tinkering with it.  On the base, I shoved an air brush needle through the middle of a Warhammer tree and glued it through a piece of Secret Weapon miniatures tile that I never got round to painting.  This is the true anchor point of the model; the talons just rest on the branches and stop it from pivoting.  It was very fiddly and the tree had to be pruned and remodelled, but it turned out pretty well. 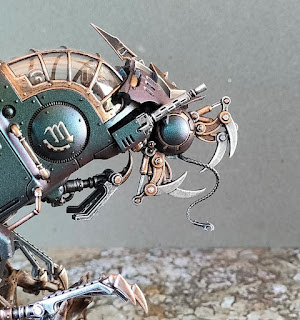 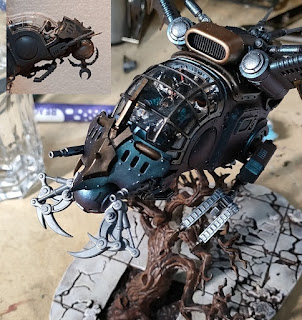 The mark of Slaanesh nose was unceremoniously pulled off and replaced with mechanicus pincers.  I considered attaching them horizontally as Castigator suggested and admit it looks pretty terrifying but I decided not to in the end.  It seemed more insectile than birdlike and this model was always going to be a budgie.  Having removed the only Slaaneshi symbol on the vehicle I was a bit stumped about making it a devotee of She Who Thirsts. 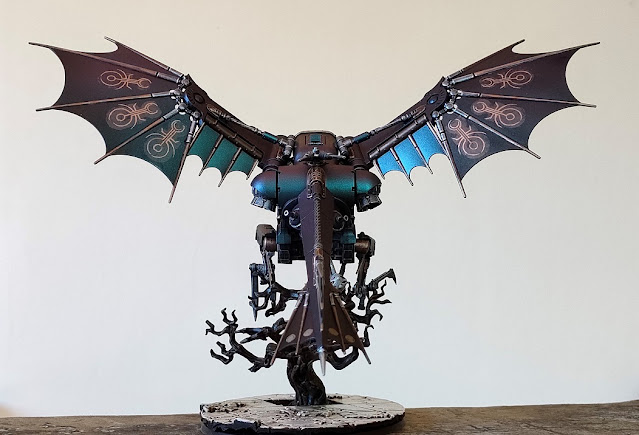 So I decided it was time for a bit of freehand, which is enjoyable in some ways but also fraught with peril and very time consuming.  I had an idea to use decals in order to speed things up a bit. These are Necron in origin but I changed them to show that this is a blend of Necron (crop circles), Chaos (mark of Slaanesh) and Tyranid (six legged beastie).  I thought I was being very clever but disaster struck at the 11th hour when all the bastard things began silvering.  Some of them started to peel off. 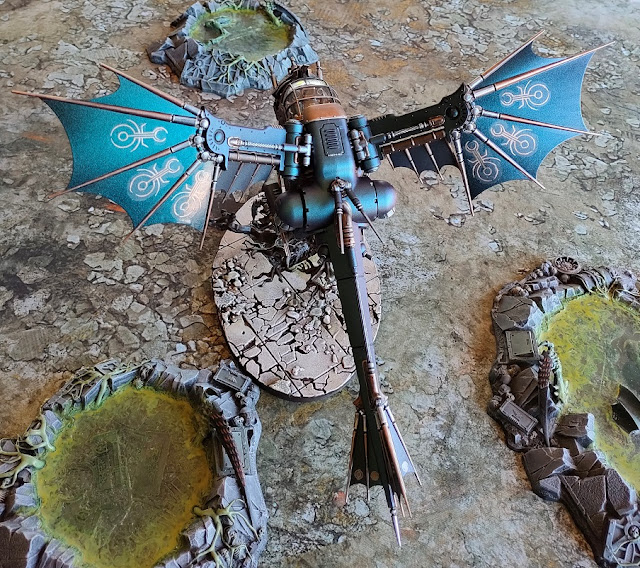 The more they dried out, the worse it got.  I tried my usual fixing techniques: Lashings of Microset decal softener; Puncturing holes in the air pockets and adding even more Microset;  Peeling back and re-applying parts of the transfer (I'd already painted over them at this point so removing them altogether would have made matters worse). 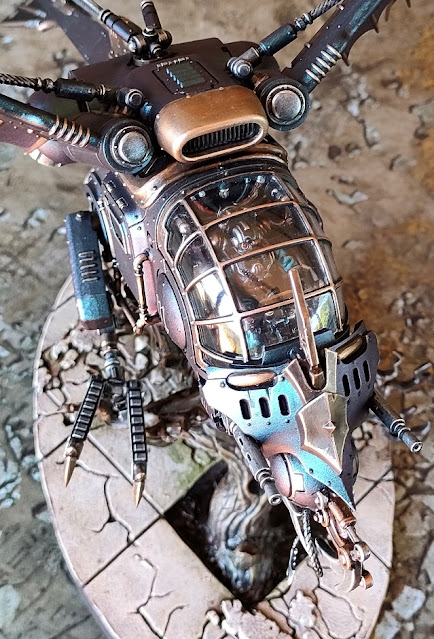 In the end they would only stay down with the judicious application of varnish which pretty much ruined the finish on the wings.  Another evening spent weeping gently into the paint station.  Maybe it's the colorshift paint but a more likely explanation is that I was using really old Necron transfers and the adhesive on the backing paper had gone funky.  The decals on the inner surfaces of the wings were newer and didn't seem as bad. 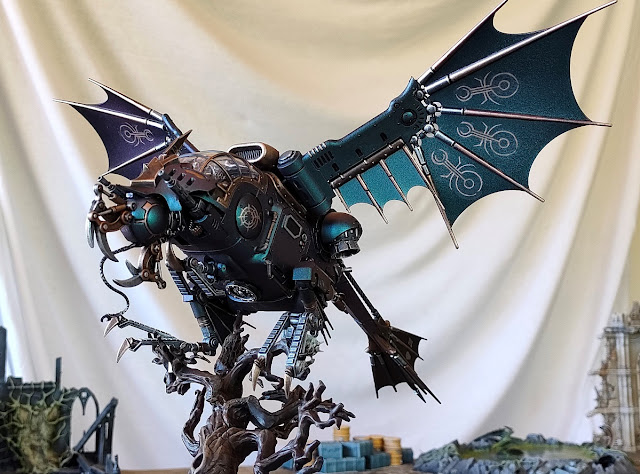 Ah well, at least my hobby muse finally came back. Slinking into the house in the wee small hours of the morning like a stray cat.

"Where the feck have you been?" I demanded, "and what time do you call this!?".

The muse just snorted derisively and rolled her eyes, sauntering off to the kitchen to raid the fridge.

"You treat this house like a bloody hotel!" I yelled after her.  It's an extremely one sided relationship. I can't deny that I had a blast painting this though.  After I'd reconverted it of course.  It all seemed easy, once the ruinous powers told me what to do.  Apart from the 'decal debacle' of course, but that's Chaos for you. 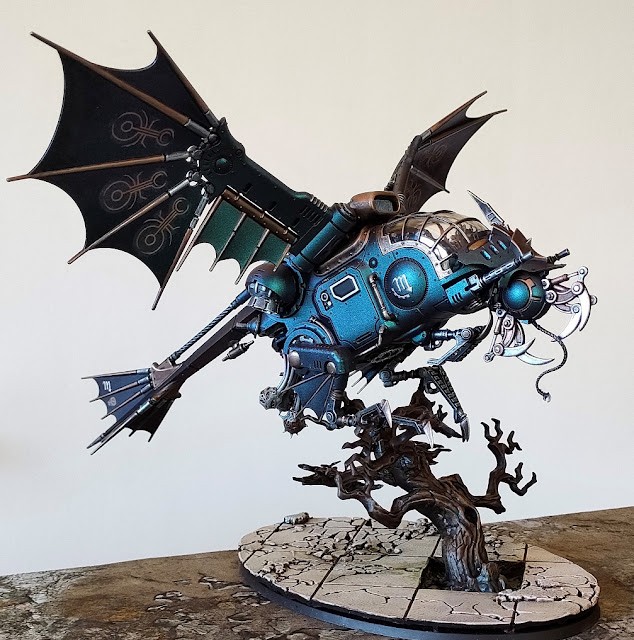 I also created my own hellforge icon if you look closely at the canopy and tail.  This is the height of conceit, but then Slaanesh is the god of excess and hedonism and its good to have a bit of backstory.  Pride always comes before a fall. 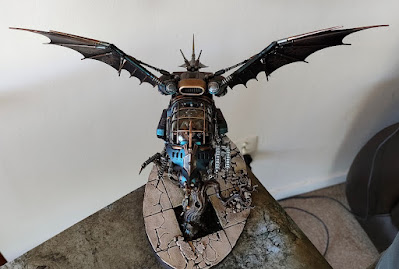