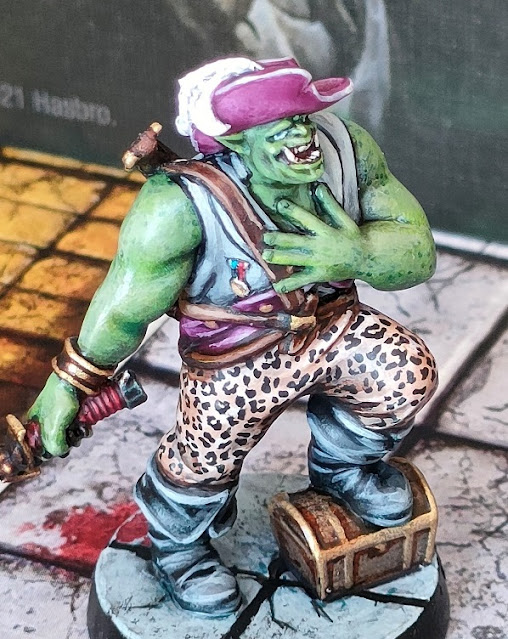 Not gonna lie, I spent an inordinate amount of time painting those trousers.  Painting the whole model in fact.

I don't even want to think about the total hours spent painting this week.  I'm not really complaining, this is completely fresh for me.  I think 40k was going a bit stale and I needed to do something different for a while (the grimdark will inevitably draw me back in).

Anyhoo, the adventurers are assembled and ready to plunder!  The obligatory group shots above and below.  You can see the progress of all this year's Squaduary participants over on Stepping Between Games. 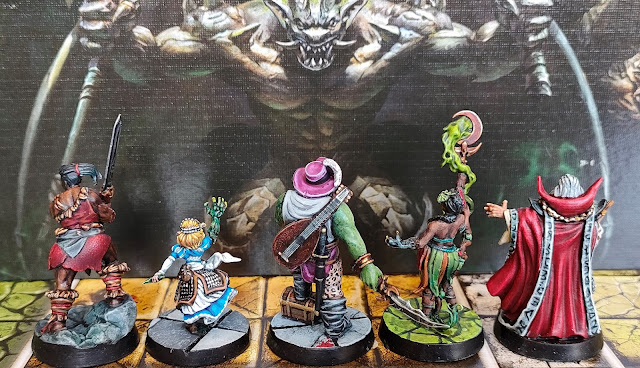 Waaagh was the worst time sink but this is definitely the best orc I've ever painted.  Of course, his journey was not without melodrama. 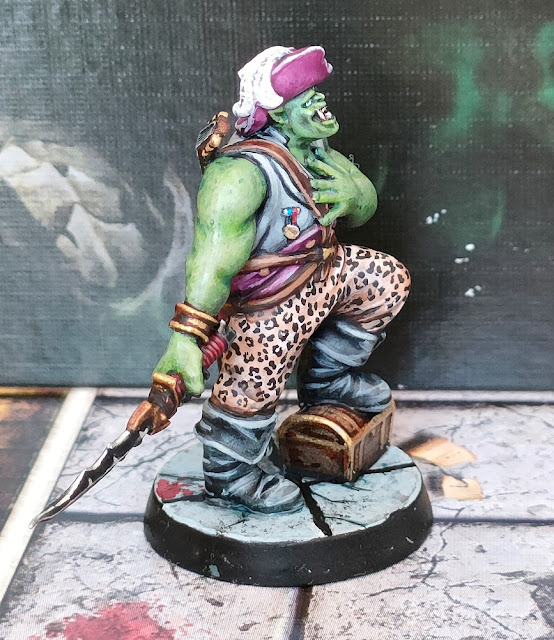 I finished all his fine detailing on Friday night.  He only needed a couple of washes and touching up and he was done.  I decided to celebrate with a few beers and having suitably clouded my judgement, I set about finishing him off. 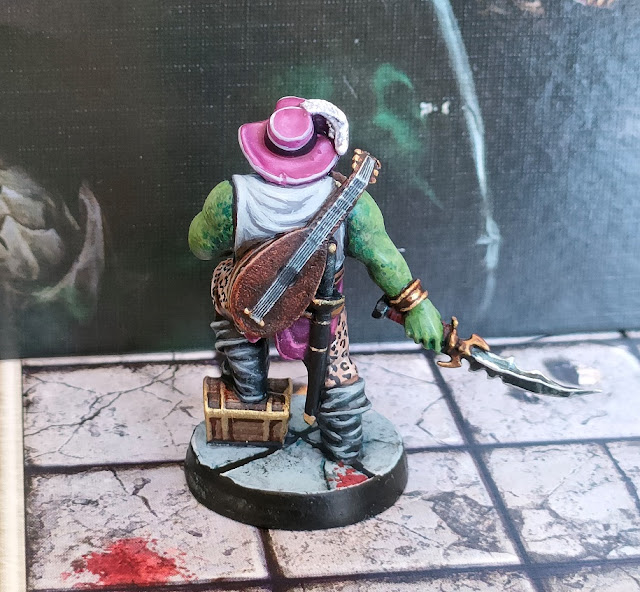 But the washes were taking too long to dry and more beers were required.  I came up with the genius idea of using a heat gun on low setting to speed the process up.  It was going really well.  Sometimes you can't judge whether a wash is working until it fully dries.  Then I melted his sword. 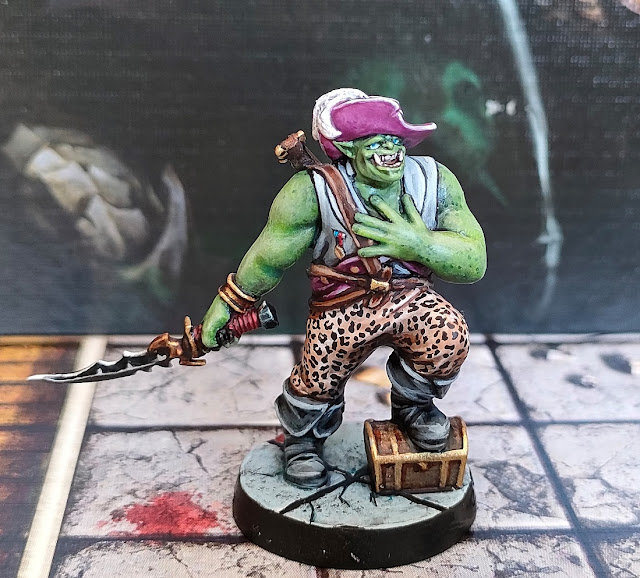 To my credit, I think I managed to salvage the situation by shaving off the bubbling, scorched paint and re-straightening and completely repainting the blade.  However, it is now so thin, it will inevitably snap during a game. 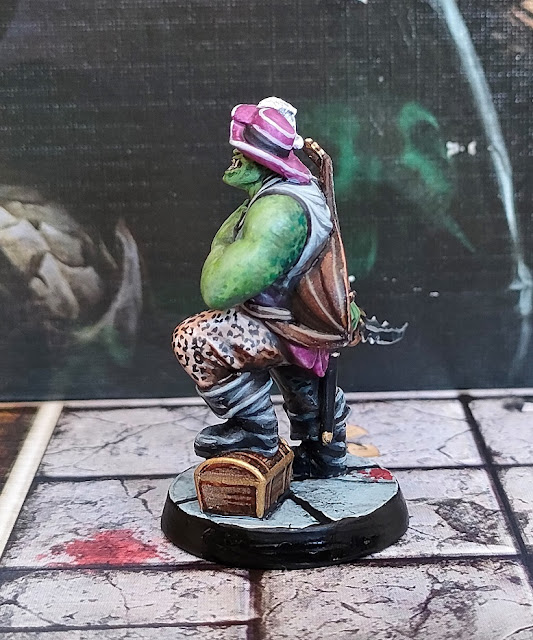 Anyway,  why does Waaagh have claws on his right hand but not his left?  Well, I could say that I was too lazy to remove them but that's not entirely true.  As a lute player, Waaagh likes to clip the fingernails of his left hand in order to use the fingerboard and press down on the frets properly.  As an Orc, Waaagh likes to pick the strings with his right claw and rip the faces off his enemies. 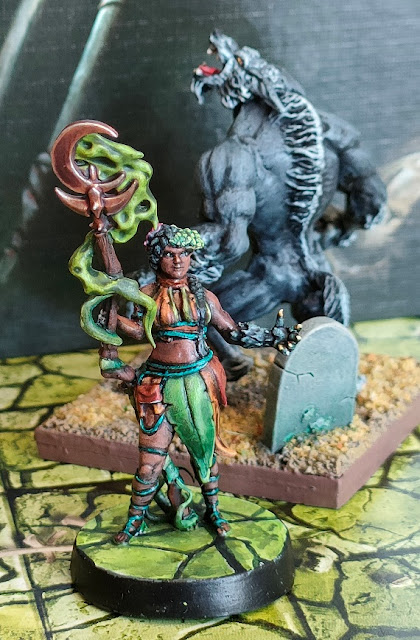 I had to speed things up with Verdaine (and Jandalf still wasn't done!).  I included a shot of her shapeshift form which is a werewolf because I don't have a bear model (just bare models! Ba-dum-tish!).  I might have to get one at some point because that base is way too big. 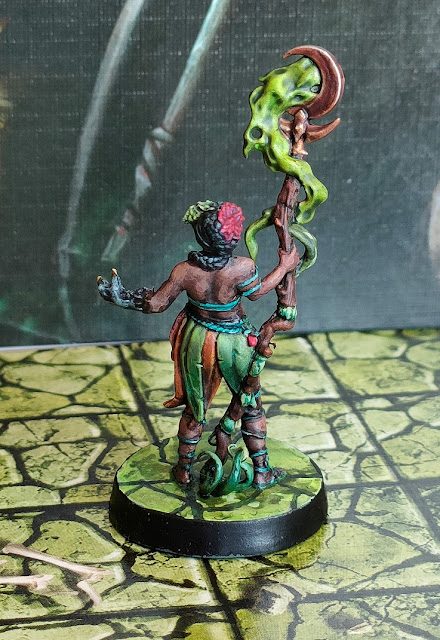 I was trying to get all warm and earthy with the druid but the Terradon Turquoise and bright green paint (Scorpion Green) lessen the effect.  Trying to do fine detailing with contrast paint is worse than edge highlighting and likely to give you a brain embolism.  So I just called her done in the end. 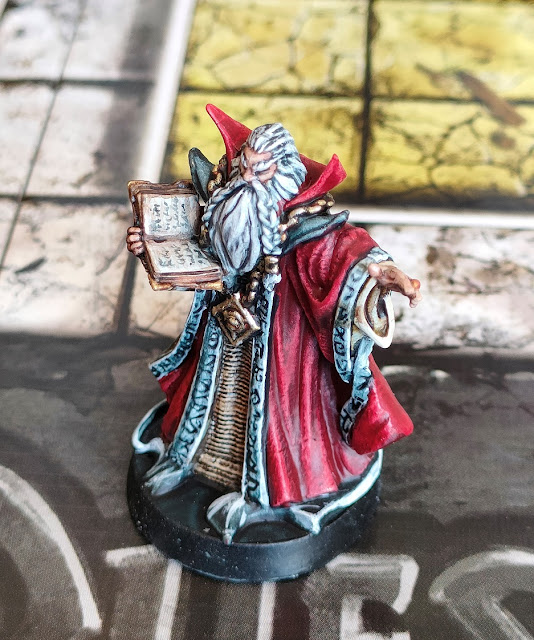 The bases were a bit rushed too and I didn't bother with Jandalf's because there's very little floor space under his robes. Still, I definitely enjoyed painting this little squad and looking forward to playing a game with them. 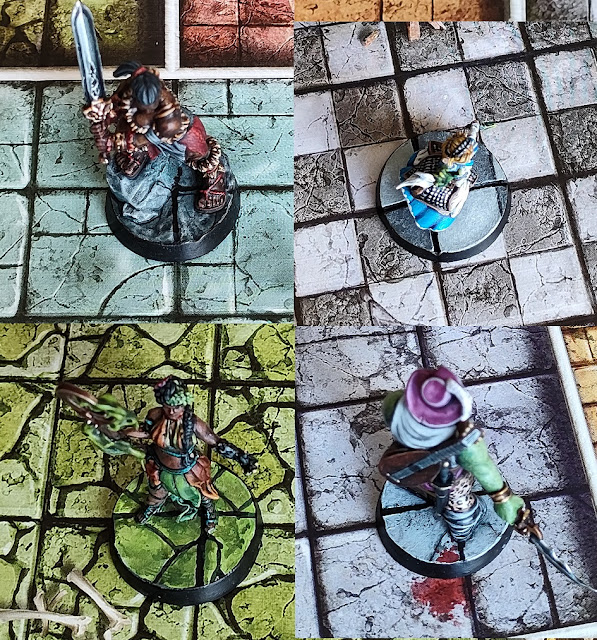 Although I was in a rush towards the end, it wasn't through lack of painting.  I was doing test models for the furniture.  I used rattle can Zandri Dust/Cygor brown on the wood bits and rattlecan Grey Seer/Black Templar on the stone bits.  Seemed like a quick and easy win, and it was.  The trouble is, painting the wood became almost theraputic.  It was like staining an old wooden cabinet you've just restored.  Liberally applied with long, smooth strokes, you could really see the grain of the wood start to come through in glowing, rich colours.  I ended up doing the entire set.  Of course the detailing and highlighting will slow me down considerably but a lot of the furniture is almost good enough to use now. 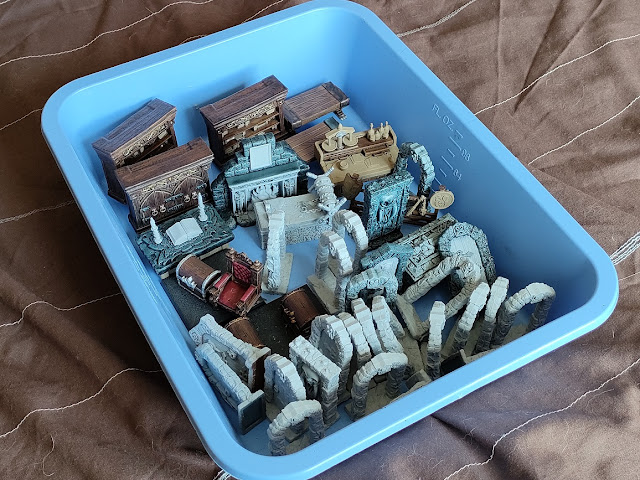 Particularly pleased with this chair.  It has just 4 colours on it: Zandri Dust, Cygor Brown, Flesh Tearers Red and Pink Horror.  There are multiple, thinned down layers applied but I'm not even sure I needed the pink really.  Learning to paint smarter, not harder! (except when it comes to leopard skin pants) 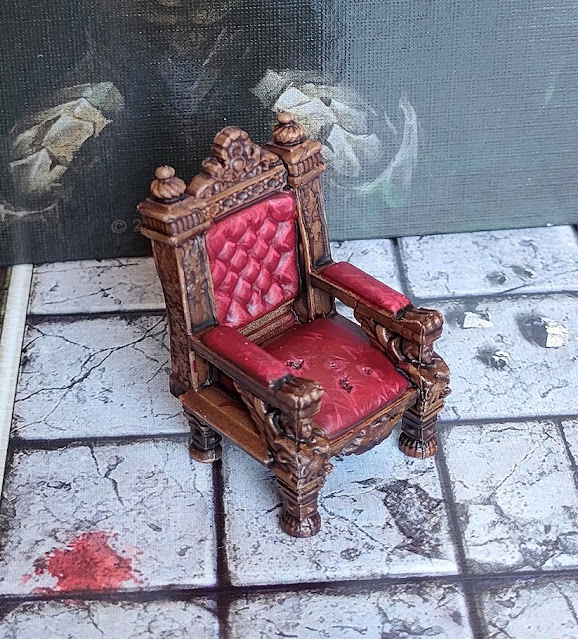