Jandalf sat back smiling.  He never really felt like he was being a proper wizard unless he was meddling in other people's affairs and the current situation had him in a very good mood.  He was seated at a table in the tap room of an inn, with four relatively famous adventurers, all talking animatedly.  The inn served an excellent ale and much of it was free for the brave souls who had volunteered to fight for village.  The party of five drinkers would soon have to think about turning in for the night because they had an early start tomorrow.  The Tomb of Terrible awaited them just a few short miles away and Jandalf had pledged himself to vanquish the evil sorcerer who had taken up residence.  He been pressed into swearing an oath before the village elders to that effect.  This was performed with a ritual goat sacrifice at their temple and involved all sorts of unguents and chanting.  The curse they had bound upon him, should he decide to forfeit, was particularly unsavoury.  His current companions had refused the 'pledge' but remained enthusiastic about the prospect of loot and violence. 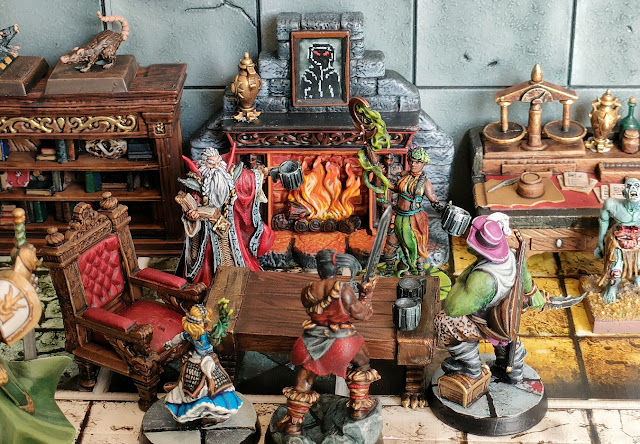 The evil sorcerer in question called itself 'The Mouth of Saurbong' and was said to be a powerful aberration known as a 'beholder'.  This vile creature had been terrorising the surrounding countryside with its cohorts of undead zombies and skeletons.  Many of which were the unfortunate re-animated corpses of unsuccessful adventurers sent out in the first wave to explore the tomb complex.  Such trifling rumours didn't concern Jandalf. He felt like he could take on anything with his team beside him! 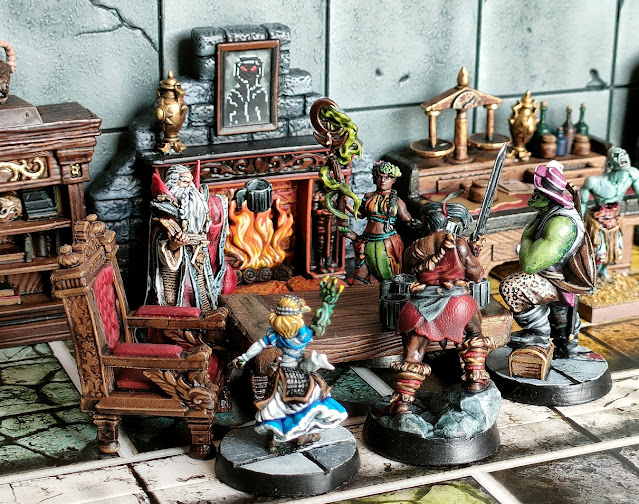 He had put out the call and it had been answered. Verdaine the Druid from the Semi-Mythical Forbidden Grove (since she was proof that the Grove existed, she was reluctant to use 'mythical' as an adjective).  Barb the Barbarian from the sparsely populated Hinterlands.  (It had been the heavily populated Hinterlands before Barb lived there).  The notorious Waaagh the Bard who had single handedly ended the Second War of the Orcs by performing 'Ninety Nine Heroic Brews on the Wall' for the human King in his royal court.  (The king had decided that any race who played that badly weren't worth conquering).  And then there was Wendy the diminutive Warlock who just sort of turned up.  At first, no one had the heart to turn her away, she was so endearing and eager to please!  By the time they realised she was a psychopath, they were all too scared to ask her to leave.  But that could just as easily work to their advantage.  Jandalf was a firm proponent of fighting fire with fire.  It was all going to plan!  This final gathering at the local inn 'The Prancing Pwnage' to lay down their plans had made him sure of it. 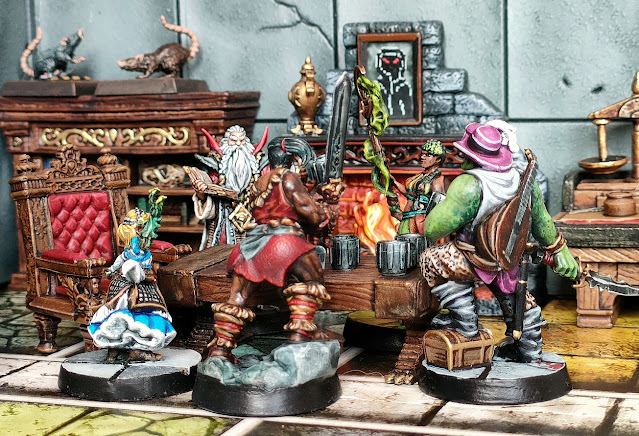 Jandalf's musings were briefly interrupted by shouting from a nearby table.

He glanced over and saw a trio of heavily armoured warriors in the corner. They were playing some sort of bizarre drinking game.  Jugs of ale had been lined up at one end of a table and they were trying to bounce an eyeball off the table and make it land in one of the jugs.  Jandalf sincerely hoped the eyeball wasn't human.  Or any anthropoidal species for that matter.

The bartender called across the crowd, “A bucket for my good sir!”

The man who had requested the bucket, huge and bald headed, leaned against the wall and began breathing heavily.

“And perhaps the cleaning lady!” the barman added.

Jandalf had, of course, heard of the infamous 'Stormsinger's Curseflingers', an unsavoury band of wandering sellswords and ne’er-do-wells.  The three of them were quite raucous and had hogged most of the attention at the bar during the evening's festivities.  Apparently, they were going to save the village too, but Jandalf didn't believe a word of it.  A ghastly bunch of thugs.  No one knew where their leader, 'Anal Stormsinger' hailed from but he was said to have a terrible temper and no good reputation.  His accomplices were equally brutish.  The woman known only as 'The Morrigan' had a strained look about her as if she was being clenched somewhere vital.  The other accomplice, ‘Seamus the Disarmed’ was spewing messily into the newly arrived bucket. 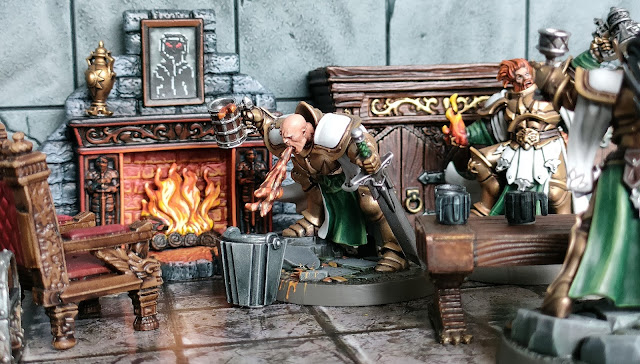 “Looks like someone's making room.” said Barb.  She downed an improbably large tankard of ale, her huge bicep bulging, and stood up.  “Speaking of which, I need the latrine!” She excused herself, wandering out of the tap room towards the outhouse.

Waaagh finished off his own ale and with a sudden burst of inspiration leapt up on the table.  He began a lusty refrain, designed to fill his charges with vigour and courage.  Several patrons abruptly headed for the back door but he cheerfully ignored them.  They were going to do it! Vanquish evil and perform heroic deeds!  Waaagh rounded off his song with a little comedic jig.  In his excitement, he accidentally kicked over a half-filled mug of ale.

“Did you just spill my pint?” called a low voice from the fireplace.

“Oh I'm terribly sorry!” cut in Jandalf and started babbling.  “My friend here appears to be a little worse for wear.  No offence meant. Let me buy you another drink”.  He smiled at each of the Curseflingers hopefully, steepling his fingers.  The Morrigan eyed him with a birdlike intensity.  Seamus muttered something unintelligible from the corner, wiping the drool from his mouth with his surplice.

“Hold on a minute!” interjected Waaagh, climbing down from the table. “That was my pint wasn't it? You didn't even have a drink, you spawny git!”

“You should try lifting up your visor first.' replied Waaagh. “Doesnt it get hot under all that armour?”

“Barb! We have a situation!  Get in here now!” yelled Verdaine.  She hurriedly began to untie her harness.  The last time she had shape shifted into animal form, her damn dress had been ruined and she had gotten tangled up in it to boot.  They never taught you these things in Druid school.  But then they didn't wear much clothing in the Forbidden Grove either.  Ah, the perils of civilisation! 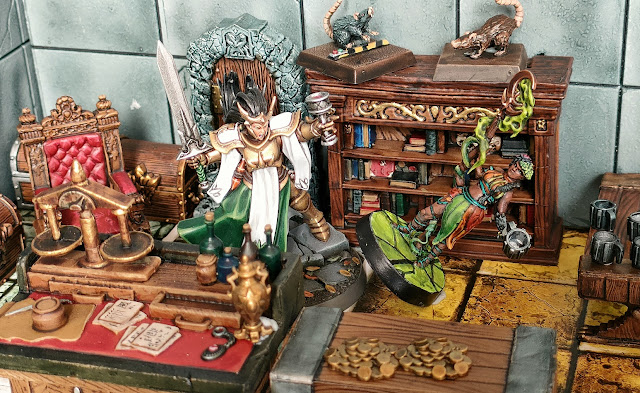 Wendy backed up to the wall and surreptitiously unsheathed her stiletto blade.  Things were finally starting to get interesting.  All that talk about saving the village and protecting the innocent had bored her silly.  Besides which, they had refused to serve her at the bar because apparently she wasn’t eighteen.  The very nerve!  She'd learn them a thing or two about being 'under-age'.  If she had anything to do with it, the barman was going to be collateral damage. 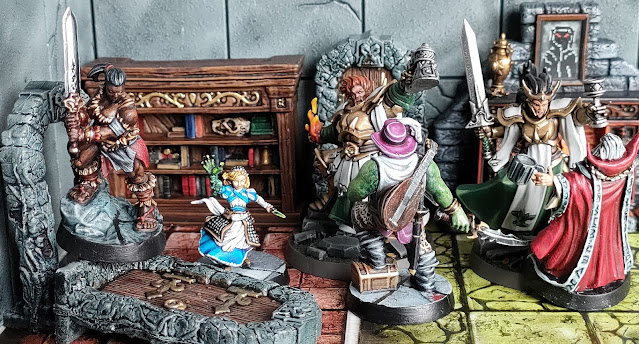 Then the main door shook violently and burst inwards, crashing to the floor in splinters and narrowly missing Wendy.  There stood Barb the Barbarian, appearing casually unexerted despite having just ripped a door out of its frame.

“Did someone say beer garden?” she declared brightly.

Wendy coughed and shook the dust from her apron, frowning in irritation. “You know that door wasn't locked, right?” she asked.

Barb turned to regard her, wondering who exactly had recruited Wendy and when.  The doll-like warlock certainly hadn't come recommended by Barb.

“Thanks for ruining my entrance.” she shot back.

There was an awkward silence.  Then the sound of animal howling and ripping cloth came from across the room.  They all turned around.  Verdaine had undergone a startling transformation.  Where the petite maiden had lain sprawled, an eight foot Werewolf growled ominously and picked off tattered bits of clothing from its slab-like arms.  Jandalf had time to berate himself for failing to spot this on the application form.  Lycanthropy was definitely not in the job description.  He would have to review his interview technique for future recruitments.

The beast thudded over to them in loping strides and cocked its head at The Morrigan.

“That was my favourite dress.” it snarled.

Jandalf sighed heavily and tried to straighten his collar which had been badly crumpled.  It would seem that this adventure had started early.