Ok, its not actually as good as a Transformer but I finally figured out how to make the carapace open and close without using a bajillion magnets.  And it does transform into a Sporocyst. However, I forgot to take a picture so you'll just have to trust me when I say that I didn't glue its bottom on. 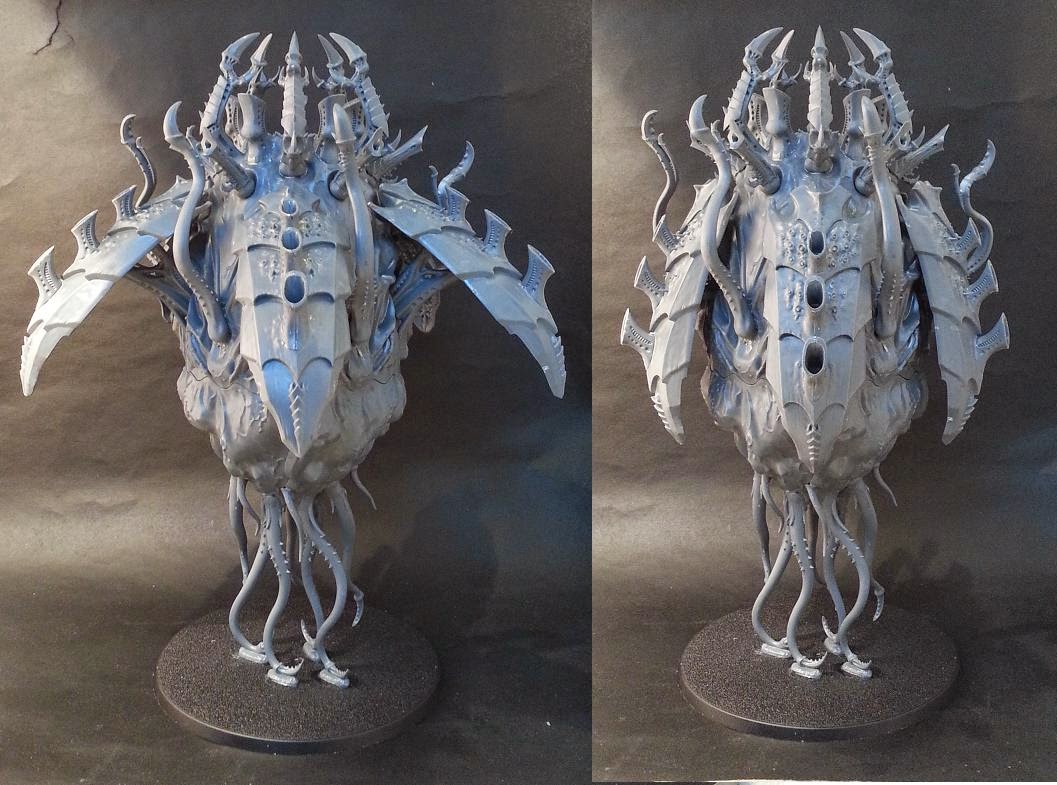 I started without building the kit.  When I attempted this last time, it was just too fiddly and difficult to cut holes in the body after it was glued together.  This time, I cut 'half' a hole into one of the 5 upper body pieces and used it as a template for all the others.  The hole is actually quite a bit higher than the joint that the arm should fit into. 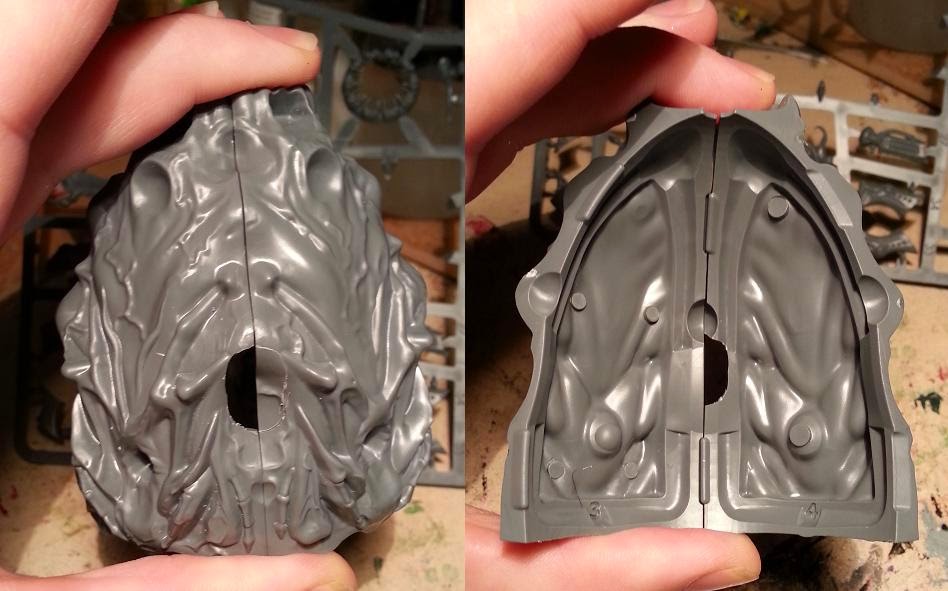 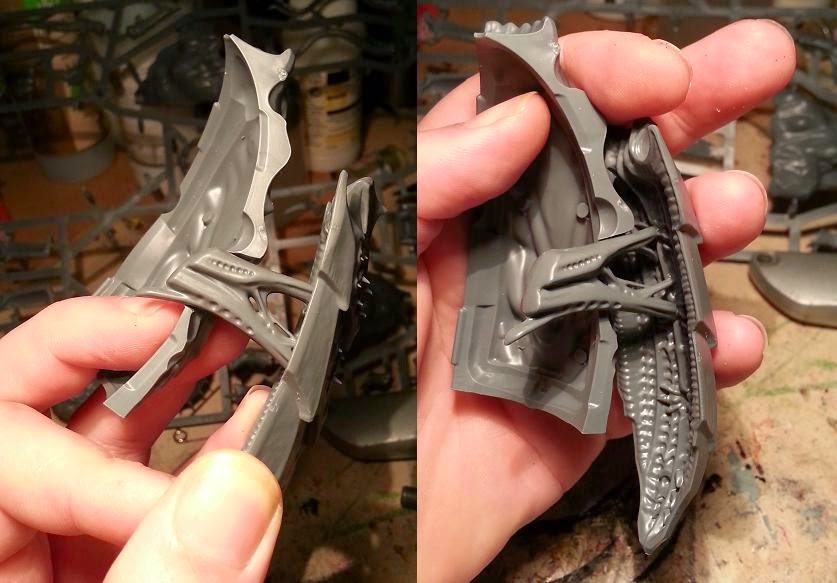 Then the kit was put together.  I drilled into the bottom section of the arm and embedded a 5 x 1 mm rare earth magnet into it.  The opposing magnet was embedded into the body.  This allows the carapace pieces to be placed in the 'open' configuration. 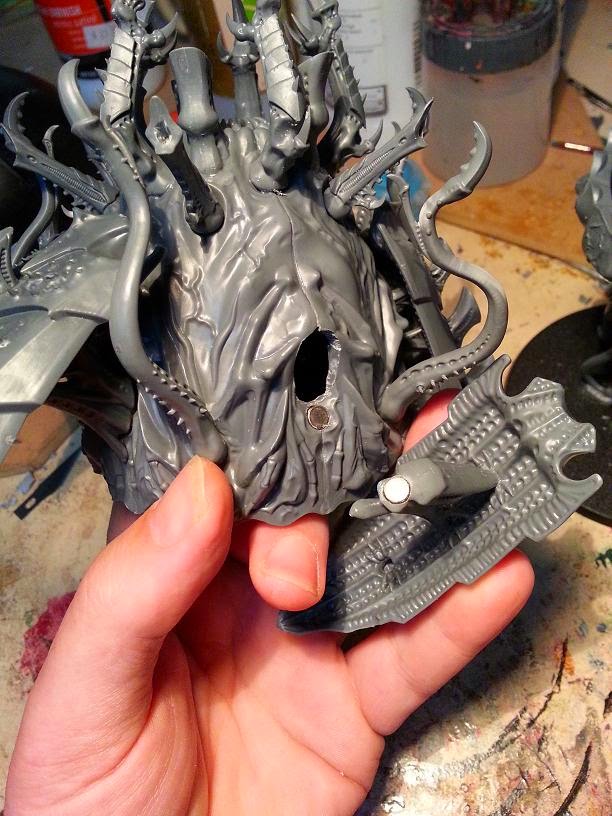 However, I also needed to make the carapaces fix in place when they are 'closed'.  So I made a cylinder out of old sprues and glued it inside the body.  I added more magnets on more bits of sprue to get the carapace arms to click into place. 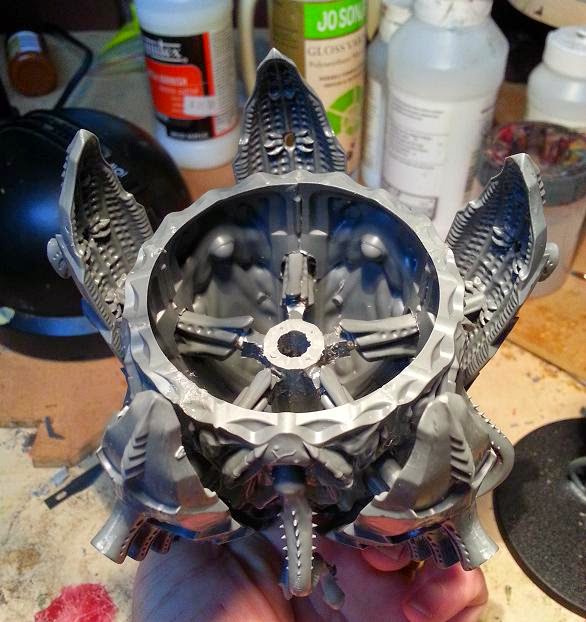 And it's done!  With a grand total of fifteen magnets.  I have now run out of magnets.
Posted by Monkeychuka at 21:54 1 comment:

A:  When its The Spawn of Cryptus.

This bad boy is significantly larger than the Space Hulk Broodlord and about twice as big as the Finecast Fonzie version.  The model itself is superb and the base is a great idea (the base size is... unusual).  Many thanks to Matthew, the Blood Angels player in GW yesterday who agreed to split the cost of Shield of Baal: Deathstorm with me and effectively let me have the mini rules and campaign book for $5 (and Nathan for playing mediator :)

I've repositioned his arms so he is no longer telling fishing stories but the standard pose is still great and very menacing.


From what I can tell, the ultimate product of Genestealer evolution in this campaign supplement looks very much like a Broodlord but stands apart from the Corporaptor Primus in subtle ways.  Well, not so subtle actually.  For starters he's a warlord and you have to take him with the 'Children of Cryptus' formation (a psyker warlord without synapse? Does he write down his orders on a tablet?).


Its very similar to a bog standard genestealer unit with scytals. However, for 11 points more you get Preferred Enemy and Stealth without being able to take Biomorphs or additional models.  I'm not sure it reinstates Genestealers as the blood curdling killers of old, but if nothing else, you get a very cheap warlord  with a good, non random trait (albeit with a 144pt troop tax). Is he an HQ choice though? No, which is a shame.  It would have been nice to have a really cheap HQ option (71pts!) and maybe focus on something other than dual Flyrants.  If they'd made him an IC it probably would have been a bit broken but sales of the model would have been very healthy.

It reminds me of a toned down, Tyranid version of the Primarchs in some ways.  Ok I can't play 30k with nids but I can have a bigger, fancier version of one of our iconic units mounted on a cool base.  So maybe he's not quite the quality of say, The Night Haunter, but at least he won't start acting all 'high-camp' like Mr. Curze.


"Well now", murmured Konrad Curze, hooking down the corner of his lip thoughtfully with the tip of one extravagant, bloodied claw. "Interesting".