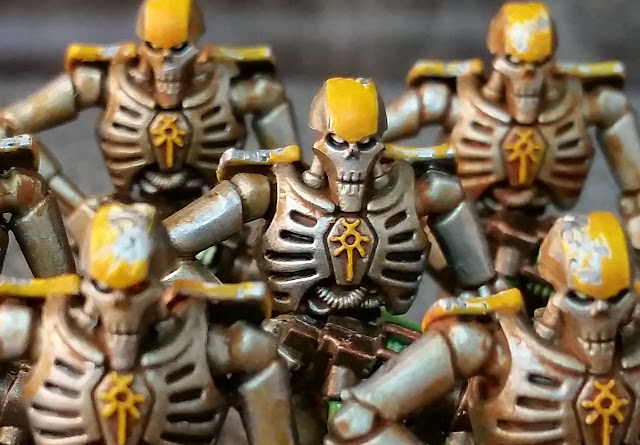 Necron Phalanx complete.  I used all 40 of them in a game the other week.  Having completely forgotten to deploy my Scarabs at the start, the ensuing loss was well deserved and Brandt rolled over me with his Mechanicum forces.  Actually I'm not entirely sure what he was playing. He had Skitarii. And Cult Mechanicus. And Inquisition.  And a Knight, I remember that much. There might have been a 5th Codex in there somewhere. (edit: Assassinorum! that was the 5th) 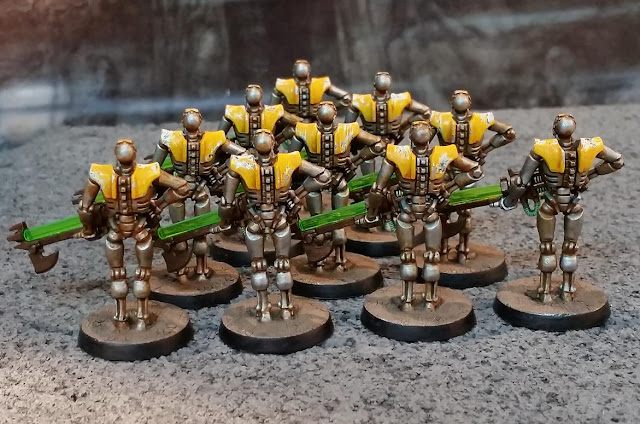 I was handily beaten, but at the end of the game I still had 36 warriors left.  This was after they went toe to toe with the Imperial Knight too.  4+ reanimation, re-rolling 1's with a duo of regenerating Ghost Arks in support is hilarious.  But then a regenerating Imperial Knight is even more hysterical.  The irresistible force meets an immovable object and the result is a dice grind.  So they did nothing all game except glance a Knight to death and all my dedicated offense was short-circuited with AdMech cattle prods (or accidentally left in reserve). 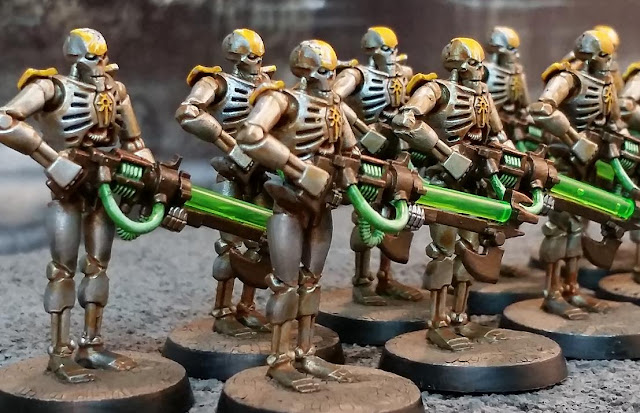 I started to get the urge to play Tyranids again.  It must be the masochist in me.  I dunno, I just wanted to do something different I guess.  A colleague at work tried to get me interested in Beyond the Gates of Antares and I went as far as pushing the 'Proceed to to Checkout' button on Mighty Ape.  I managed to resist in the end. I'd want to use my 40k models as proxies at first and nothing really fits the armies I collect.  The factions in Gates of Antares are nearly all human.  Or at least humanoid with Star Trek makeovers applied.

I was also forcibly joined to a Horus Heresy facebook group for local players interested in a sci-fi Warhammer game with no Tyranids in it (where is the attraction in this!?).  It looks quite intruiging, but the legions I'm interested in are already taken.  I'd probably want to be Word Bearers to be honest and it would give me an excuse to buy those deadly Gal Vorbak  resin miniatures from Forge World.  But I'm not ready to pull the trigger on the money pit/time sink of 30k yet.  They're just marines at the end of the day.  You can't do nameless, extra-galactic horror with 'bucket heads'. 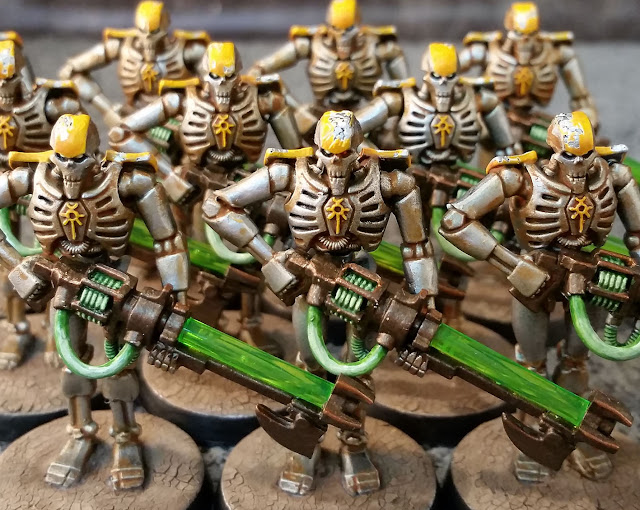 At least I'm not obsessively playing Fallout 4 any more.  At its heart, its just a dungeon crawler: Enter room.  Kill enemies.  Loot.  Repeat.  Whilst this is mesmerising and addictive for a while, it becomes tiresome eventually.  "Strong bored!  Strong want to kill something!" just about sums it up.  I chose the Railroad faction ending in my first play through (mainly because Tinker Tom, Deacon and P.A.M. aren't annoying.  Practically every other Faction member in the game is, apart from Mama Murphy who is a drug addled lunatic).  There were suitably impressive fireworks at the finale but it doesn't live up to the thrill of detonating your own home town with a nuclear device (Megaton in Fallout 3) and I think I need a break from my second play through.

Dealing with the Fallout 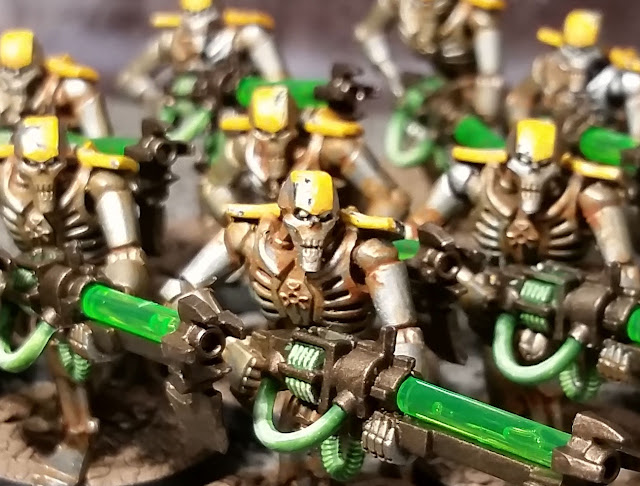 I had to be physically dragged away from the computer.  My wife pointed out that our teenage son had been waiting patiently for two weeks to play Fallout 4.  She wanted me to behave like an adult and let him have a turn.  I of course refused and threatened violence, whereupon she made good on my promise.  I was banished to the garage in shame and eventually became bored enough to do some work on the Necrons.  I'll probably have to wait a while before I can don my Grognak the Barbarian costume again and wreak havoc on the denizens of post-apocalyptic Boston. 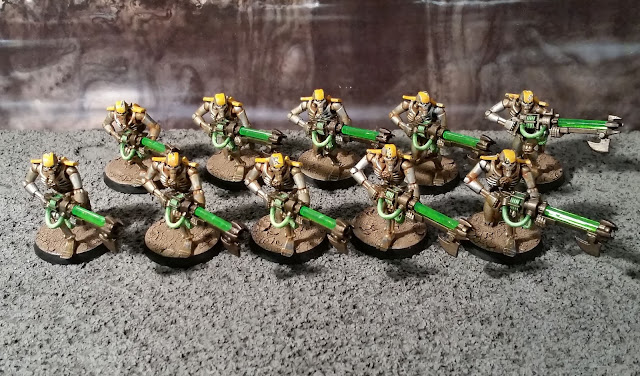 To be honest, I was getting a bit bored with it (is 70 hours excessive?).  In order to advance the storyline, you have to side with one of the main factions and I don't really like any of them.  The Minutemen are bloody do-gooders who devolve the game into a grubby version of The Sims.  The Brotherhood of Steel are gung-ho military zealots. The Railroad are delusional synth-lovers and The Institute is just creepy, but not in a good way. I didn't want to pledge my allegiance to any Faction, so I joined them all and just kept switching faction quests.

It didn't help that my favourite companions are Strong (an Ork) and Nick Valentine (a Flayed One) who are generally disliked by everyone.  It started getting silly. I got to the Bunker Hill quest and walked into a pitched battle where none of the factions were hostile to me.  I had no idea who I was supposed to be shooting at.  Strong said he was hungry and suggested that we eat everyone but the combatants kept re-spawning and wouldn't shoot back.  So I just left them to it and buggered off into The Glowing Sea.  I'll start building up the Lead Belly perk and maybe I can become one of The Children of Atom without slowly melting into a puddle of radioactive goo.

If Fallout4 was 40k, I reckon The Minutemen would be the Tau with their ever expanding shanty towns built 'for the greater good'.  The Institute would try to bring about another Dark Age of Technology with their Abominable Intelligence machines. The Brotherhood of Steel would declare Elder Maxson as the Emperor and indulge in a spot of subjugation-of-the-masses.  The Railroad would try to turn everyone into Necron synths via the bio-transference machines in Madam Irma's Memory Den.  And the Commonwealth would burn. 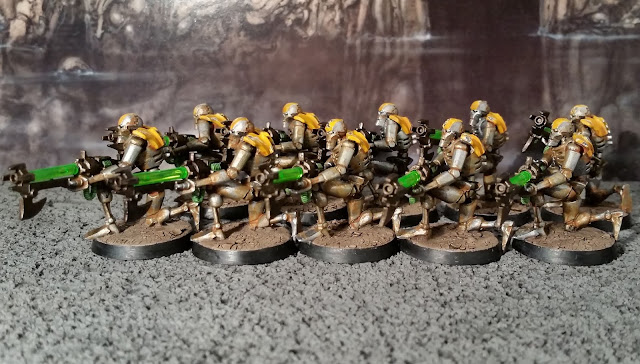 The Tyranids are, of course, the feral ghouls. Had there been a Feral Ghoul faction in the game I'd have joined in an instant.  Hunting in packs with mindless savagery and insatiable hunger is more my style but probably doesn't make for a good storyline. 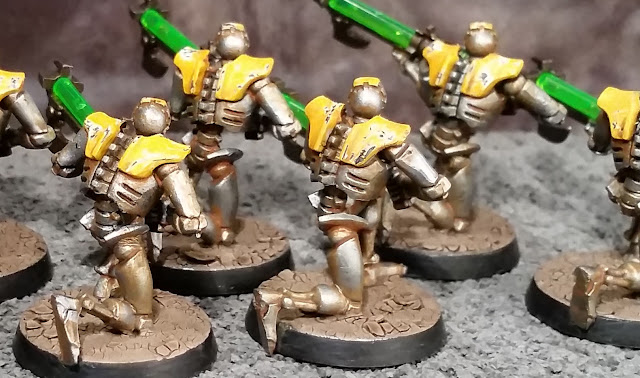