Painting the Hivestorm Redoubt is now a distant memory.  I had a sudden, overwhelming urge to own 'Deathleaper', one of the new HQ models for Nids (well, he's not actually new, but that's by the by).  The local shop didn't have any in stock but my 'impulse buy' button was flashing violently so a Lictor had to suffice.  I've pretty much been working on it ever since and I'm not even sure where all the other, unfinished models are.  Probably under a table somewhere.


I think this is why I play 40k rather than any of the other competitors.  I read the rules for Warmachine and quite liked them.  However, most of the warjacks reminded me of Digimon characters, I didn't like the look of most armies and the only one I did like (Cryx) had some sort of 'robo-chicken' in the starter set. So that was the end of that little experiment.  Likewise, I thought Infinity looked like a really good game and went as far as buying a starter box.  The models were exquisite, but they were made of pewter and only assembled into one, preset pose.  My excitement quickly palled and I immediately went back to 40k kits when thinking about building terrain for it.  Most recently, I ordered the starter set for X-Wing. Upon discovering that the models were already painted and assembled, I put them back in the box and left it in a corner.  I haven't read the rules yet.

Fortunately (or perhaps unfortunately for my wallet), Games Workshop are innately aware of the need to mainline hobbying directly into your veins and provide a vast array of plastic kits with superfluous spare parts practically dripping off them.  Rummaging around in your bits box for plastic treasure is a rare treat. Often you aren't even sure what you're looking for but you'll know it when you see it.  You've just got to dig deeper.  Its like grimdark Lego. So, if I had to give up one aspect of the hobby:  playing, painting or converting, I would choose to stop playing.  Surprisingly, I know other, better players who feel the same way.  Therefore, I'm going to stop whingeing about the Tyranid codex, man up, and get on with it.

I also received my Spawn Hive Linked Barricade from Mr. Dandy/Wargamma .  I've never owned a resin kit before (does Finecast count?) and it seemed a bit messy with lots of flashing and mold lines.  It cleaned up very quickly and easily though, there was no bubbling or warping whatsoever, and I'm very pleased with it.  Definitely better than anything I could knock up with bits of toilet roll and green stuff.  I think the Quad Gun will make an excellent Comms Relay until I think of something more sinister and disturbing, probably involving all the spare Mawloc jaws from my bits box...  I'll know when I see it.

With a ton of painting on the go and a Hivestorm Redoubt to finish, I spent most of the evening creating an archaeological dig site on one of my flight stands.  It turned out to be far more enjoyable than basecoating and looks quite cool. 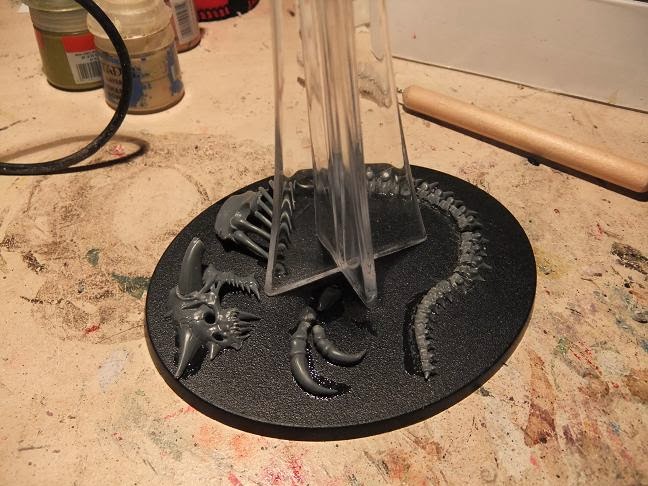 Thats what I love about hobbying.  I don't have to finish anything and can just fart around on the internet or sit in the garage contemplating my navel. I discovered these whilst idly browsing ChapterHouse studios:

"This is a six (6) piece set of 28mm pewter alien heads.   You will receive two(2) each of three(3) distinct heads. They fit on Games Workship Genestealer Models."

Posted by Monkeychuka at 20:26 No comments:

Ah, Venomthropes. I love the smell of Poison 2+ in the morning.  Actually you never, ever want it to be in close combat (and it will be dead long before then anyway) so Poison 2+ is a bit of a waste.  The Venomthrope, like the mysterious author of the Tyranid Codex, should remain anonymous and out of sight.  Producing a nasty surprise and leaving a bad taste in your mouth.

These beasties provide the 'Shrouded' rule to all friendly units within 6" by nature of gas filled bladders which emit a dense, malodorous fog.  "Brief exposure causes violent bouts of nausea and uncontrollable muscle spasms", according to the rulebook.  So basically, you can improve your Tyranids' chances of survival by farting on them.   But you'd better hide the creature in a bastion or something, otherwise your opponent will vapourise it in the first salvo.

Anyway, I've always liked the model and it's rules are a definite improvement over the last codex.  Granted, there are a few 'Ignores Cover' armies out there but, at 45 points, the Venomthrope is a bargain for what you get.  The elites slot isn't half so busy these days and its a fine excuse to buy and paint one.


I also started painting my Hivestorm Redoubt and it doesn't look like a wedding cake anymore.  I should probably buy the Stronghold Assault rules and learn about how Fortifications really work.  I've already started thinking about doing an Aegis Defence Line with Comms Relay.  That re-roll to reserves has a lot of possibilities.  I can't be arsed making another Tyranid fortification at the moment though, so I'll either have to buy an Imperial one or maybe get the Mr. Dandy Linked Barricades Spawn Hive.

Posted by Monkeychuka at 23:27 No comments: 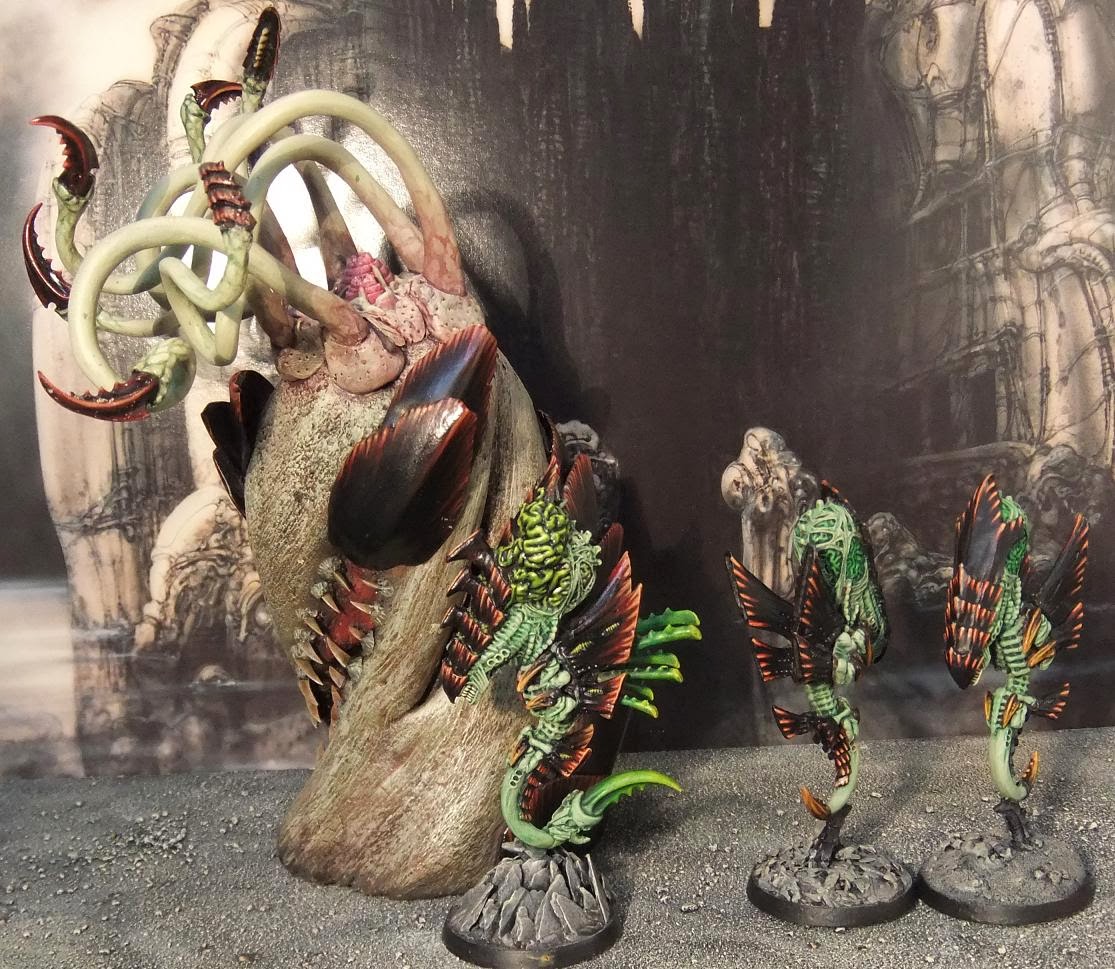 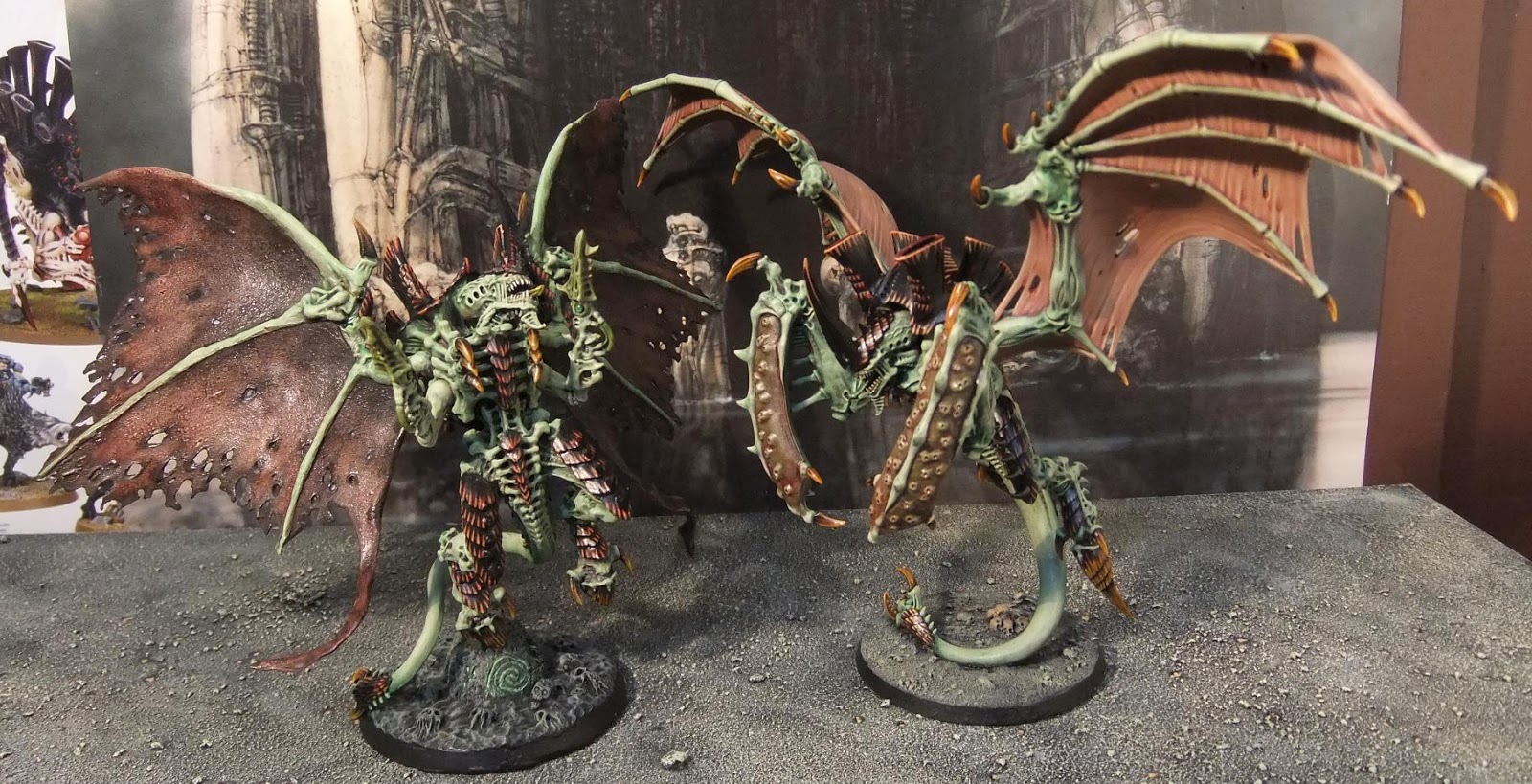 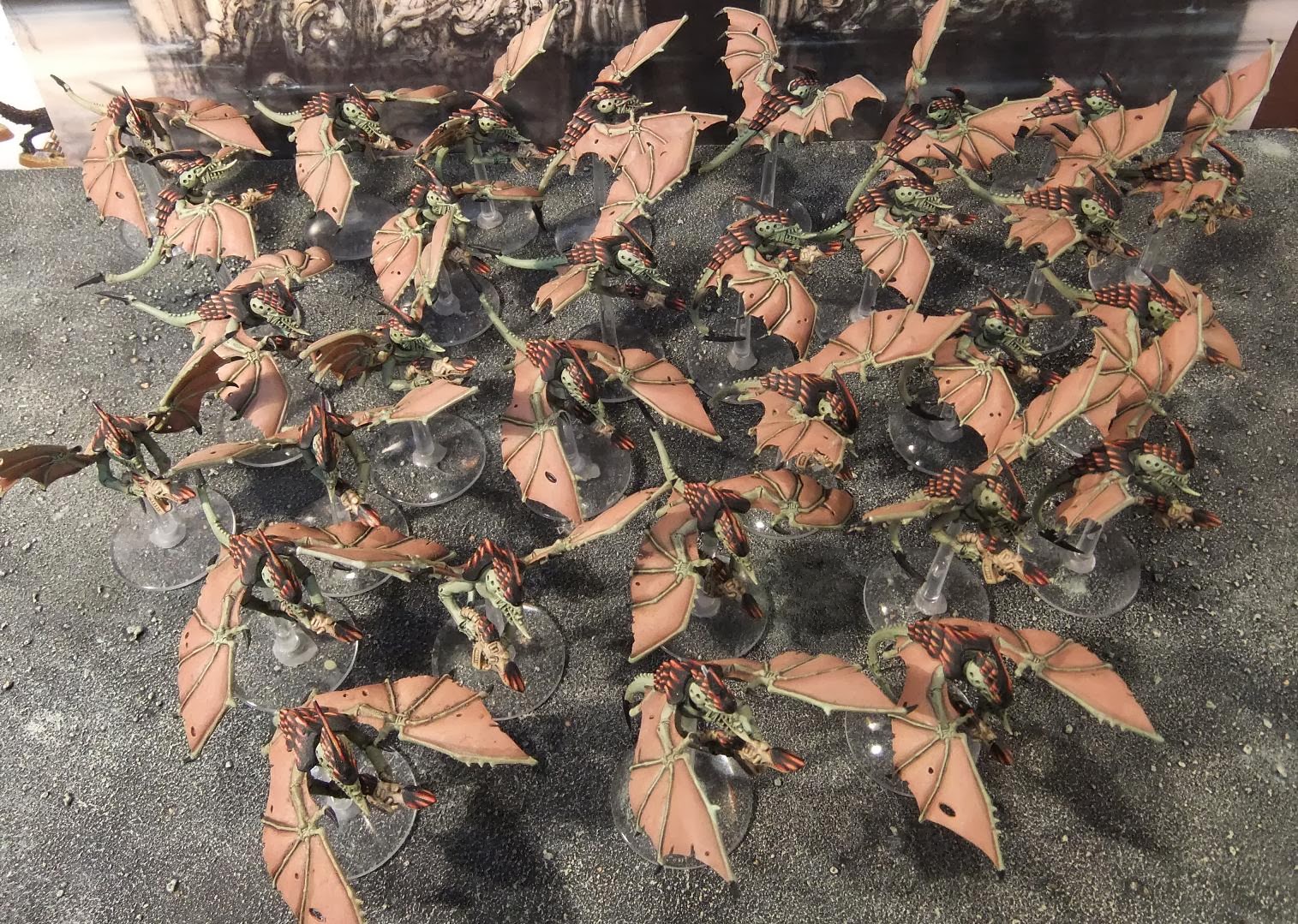 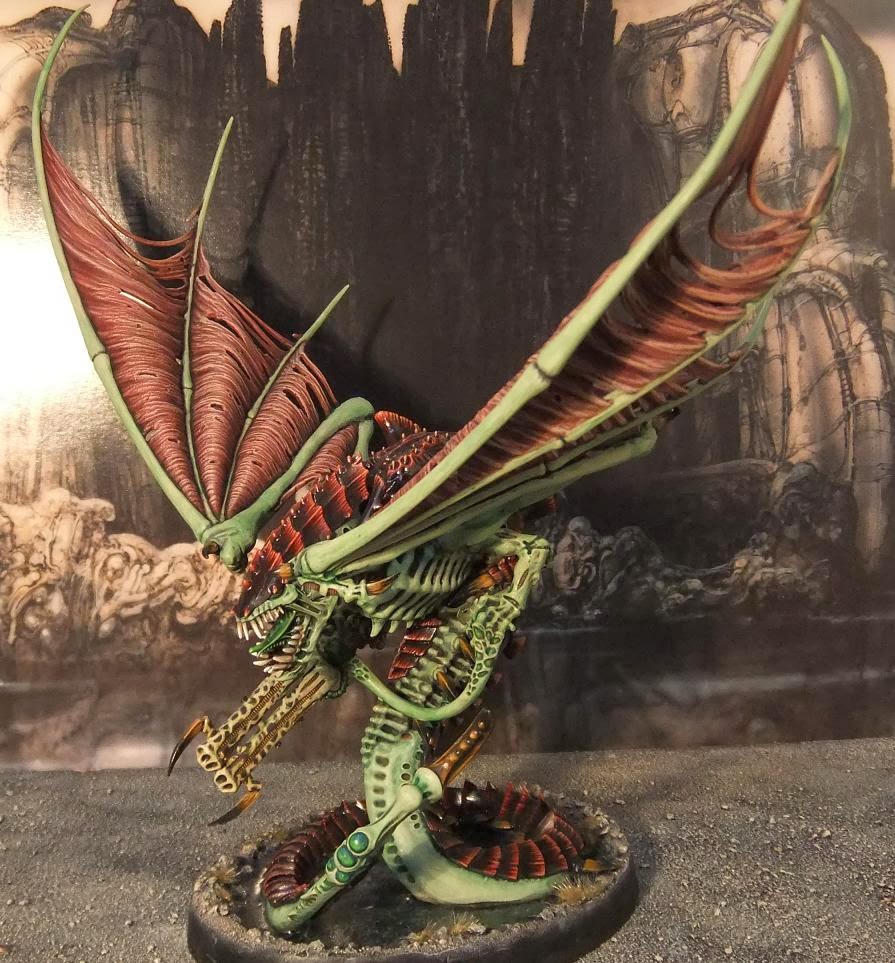 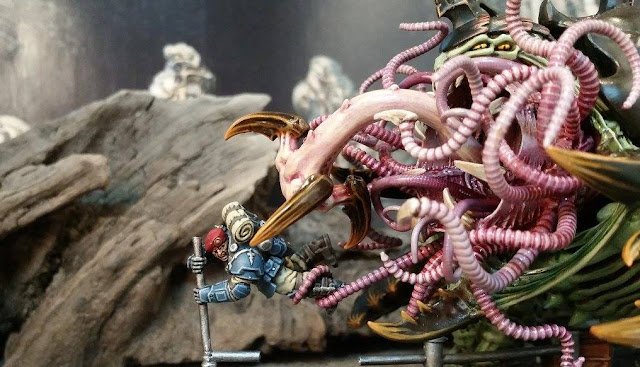 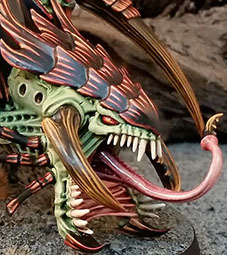 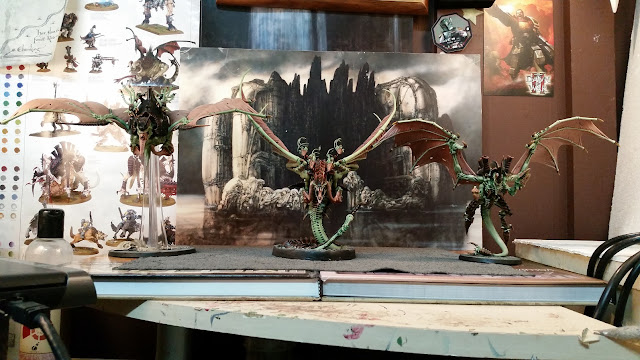 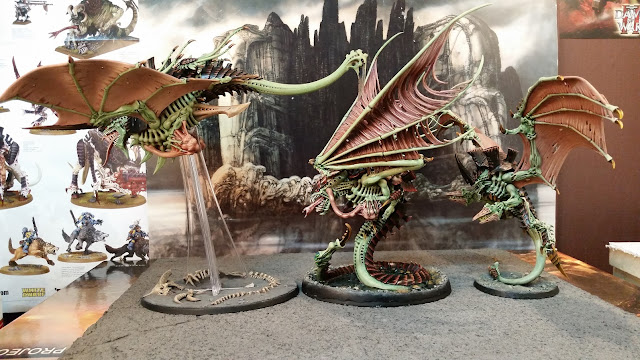 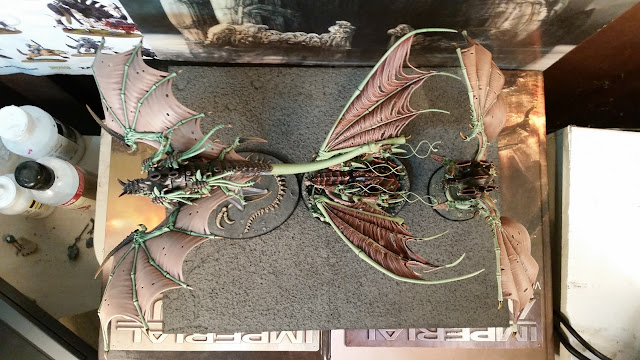 I have discovered that I am very good at sculpting anuses.  This is a slightly worrying revelation given that I wasn't particularly happy with any other feature of my Hivestorm Redoubt.


Well, that's not completely true.  I was happy with the spikes on the front of the central bunker, but anyone with a keen eye will spot that these are actually the dorsal quills from a Harpy kit and I added them almost as an afterthought.  The smaller ones are the horns from old Chaos Space Marines models.  I didn't even know I owned any CSM until I unearthed them last week.  I think they belonged to one of my sons.


Apart from that, and the Tyrannofex Acid Sprayers (one generously donated from Chris), the entire thing is scratch built. I haven't mounted it on a base or used terrain to stop it looking like a triffid in a plant pot and I don't think I'll bother.  It was a bit of a pain in the arse to build to be honest and I think I'll go back to kit bashing in future which is more fun and less time consuming.  Also, I used an obscene amount of hot glue, plasticard and green stuff and had to replenish my supplies.  The total cost of this folly probably doesn't fall far short of an actual Firestorm Redoubt.


But its not all bad and some of the features of my Hivestorm Redoubt did get the creative juices flowing.  I got to thinking about it's general purpose in the Tyranid environment.  I've built it to look organic, almost like it has grown out of the ground and I wanted the rules to fit the look.  So I've decided that it is birthed on top of a digestion pool and 'caps it off', providing a defense against enemies seeking to cut the Tyranid supply lines by destroying the biomass accumulated during an invasion.

The overall dimensions and layout remain very similar to a regular Firestorm Redoubt but some features are my own.  I've used sphincters instead of doors and spikes instead of battlements.  The bunker fire points at the front are 'Ripper swarm digestion grilles'.  The Quad Icarus Lascannons are 'Gestalt Biomass Whips' which fling a combination of Bioplasma and Warp energy goodness at enemy fliers, a bit like a trebuchet.  I enjoyed the idea that they don't just 'shoot' ammunition but hurl it like a slingshot.  Its much more alien and exotic.  I'd love to say that this was the idea from the beginning but it just sort of happened.  Nevertheless I'll enjoy fitting the rules into my own fluff and accidental modelling features.

I reckon it all started with the carpet bombing attacks by Imperial Guard during the battle for Ichar IV...

Posted by Monkeychuka at 12:27 No comments:

The best laid plans of mice and men and all that.  I had this really neat idea for my Hivestorm Redoubt involving Acid Sprayers and those toy snakes which are jointed and can be moved around in a slinky sort of way.  I employed all the hobby tools at my disposal: insulation foam, green stuff, plasticard, brass and plastic rods with lashings of hot glue. I was going for a living, organic look with the two bastions of the Redoubt modelled as giant, wormlike maws growing out of the ground and Quad Icarus lascannons reminiscent of scorpion tails.


The end result, as my wife succinctly put it, is a triffid in a plant pot.  I have to admire her honesty if not her tact.

I'm reluctant to just abandon it having come this far and I suppose it will look better when its finished and with a lick of paint.  Too late to change it now anyway.  Sigh.