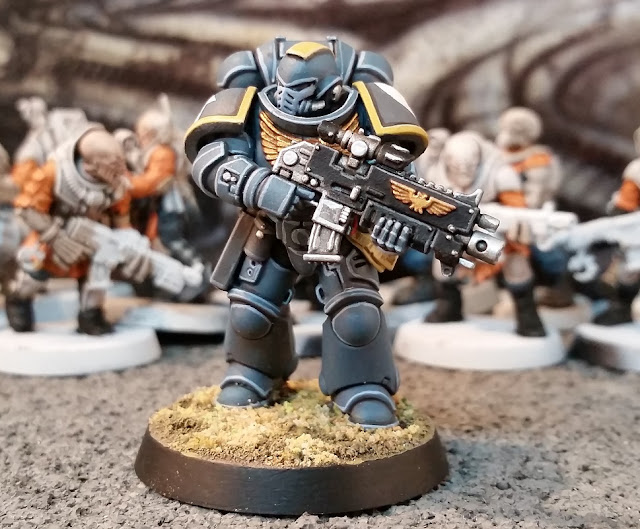 So this post should have been about my new Genestealer Cultists and how simply fabulous they are darling.  You can see some half finished Neophyte Hybrids in the background.  They have great rules, fantastic models and a new edition to play in. I got busy painting with a view to trying them out in a game or two. 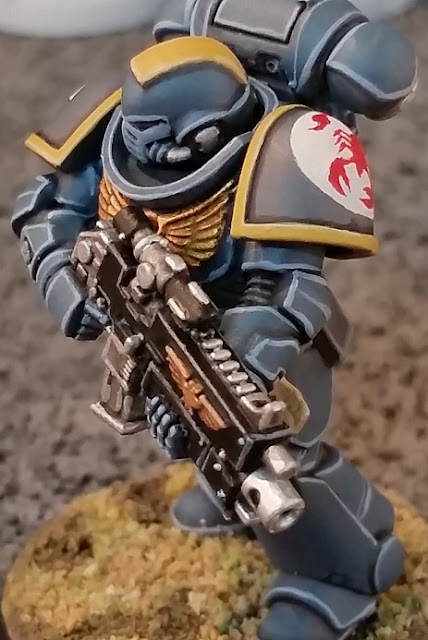 My attention started to wander almost immediately.  This is a bad sign.  I kept glancing at one of my posters on the wall as I vacillated.  It was a picture of Veteran Sergeant Zhyr, one of the most bad-ass looking Space Marines ever to grace the pages of Imperial Armour.  He's the commander of the 6th Tactical Squad, 6th Company, Red Scorpions.  A chapter I'm well acquainted with since they have had a few run-ins with the Tyranids in the past. The Anphelion Project is one of my favourite 40k books (never actually played the campaign but the artwork is stupendous and the story is straight out of Aliens).  Sergeant Zhyr is sometimes cited as 'The Perfect Space Marine' since he actually looks like an anatomically correct (post) human.  A fine figure of a man with a big sword and a robotic arm.  The fact that the Red Scorpions chapter are an isolationist bunch of Space Nazis with the battle cry, 'Strength in (genetic) Purity!' and may well be a successor chapter of the Word Bearers is irrelevant. 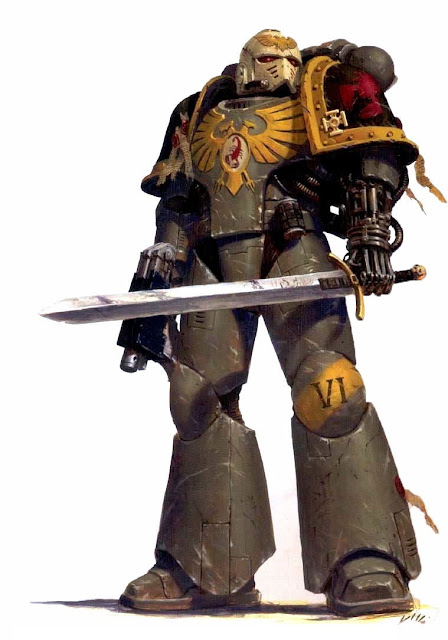 I'd just built a load of well proportioned Space Marines from the 8th ed starter set and they have armour which is very reminiscent of Mk IV. So what happened next was inevitable.  I ditched the GSC and painted a test model for a Red Scorpions Primaris Marine. 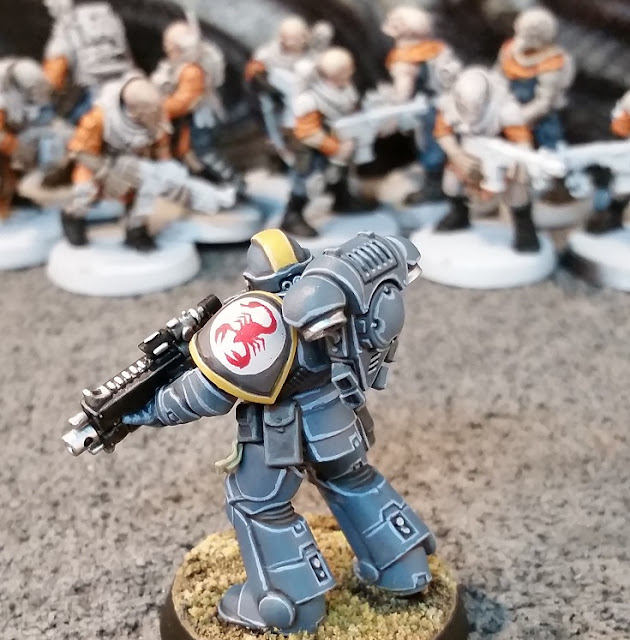 Given my failures in the past I decided to seek help and Google informed me that Duncan Rhodes of Warhammer Community fame should be my mentor.  His explanation of 'wet brushing' left me a little confused but it turns out I've been using a similar technique for ages.

I duly followed the instructions apart from the colours; I didn't have the correct paints for Red Scorpions and I'm not even sure what they are. I decided to use my Tempestus Scions colour scheme i.e. Mechanicus Standard Grey, Thunderhawk Blue and Fenrisian Grey.  I also had no yellow (well I thought I had yellow but it turned out to be an empty husk) so I rummaged around in a drawer and found an absolutely ancient pot of Iyanden Darksun.  When I opened it, there was actually a dark blue, milky film on the top but with a bit of judicious stirring it turned out just fine. 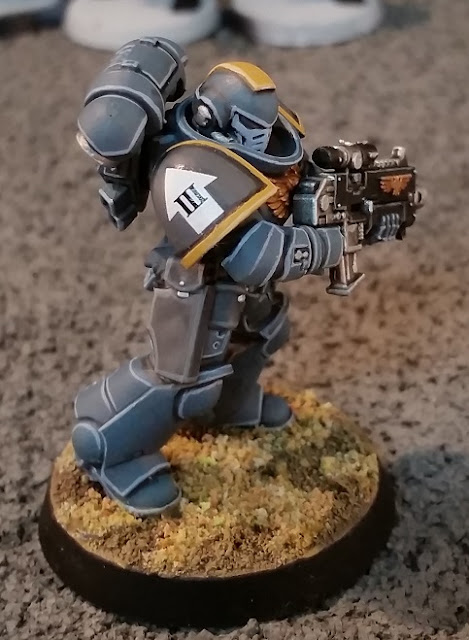 The finished result looked nothing like the marines on GW's website or the box art.  No surprises there and it happens to us all.  A little crestfallen, I decided to research further and discovered that if you want to get serious with Space Marines then you have to develop an edge highlighting obsessive compulsive disorder.  Jesus, when they say edge highlighting, they mean highlight every edge on the blasted model until your eyes shrivel, dry up and fall into your skull! 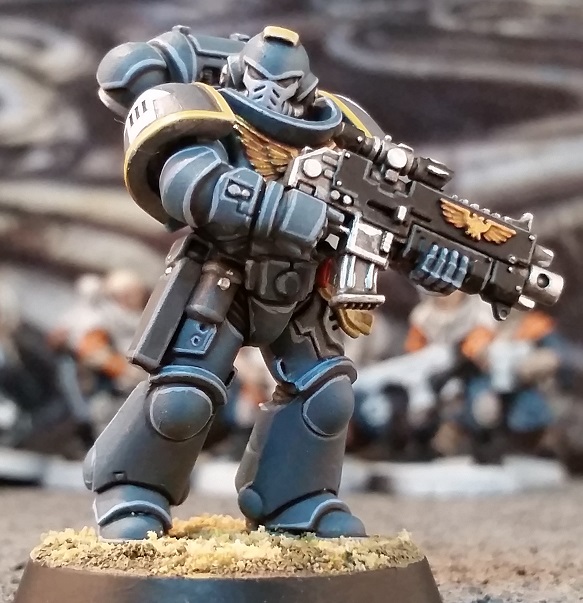 Undaunted, I modified one of my paint brushes so it was basically the thickness of a butterfly antennae and set about it.  I was pleased with the result.  So I carried on and started doing 'recess shading'.  And that was good too.  So I painted the weapon. And added detail.  And free-handed the Red Scorpions logo. And put a decal on it. And a decal over the decal. And based it. Holy shit, I think I'm falling in love with Spesh Mreens!  This means I might be starting a fourth army.  Duuuurrr! Wrong answer!  Hopefully its just a passing phase and I'll go back to the cold unity of the Hive Mind given time.  But first I think I'll finish the squad.  I think I'll call it 'Squad Dauntless'.  I sincerely hope I am not reduced to naming individual models.
Posted by Monkeychuka at 00:14 12 comments:

One size fits all 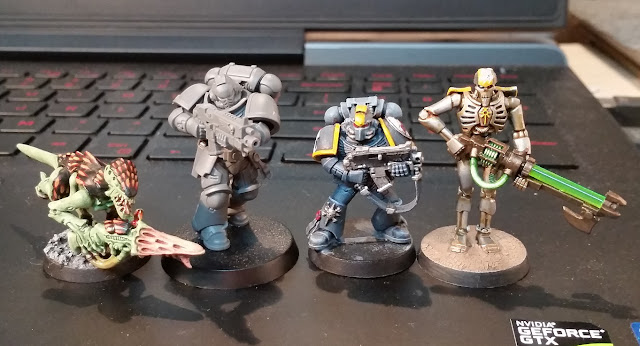 These Primaris Space Marines are huge.  The posing is great and much more dynamic.  It actually looks like there is a post-human inside that armour rather than a mannequin.

I have to admit, I like them.  Even a whinging Nid player like me can appreciate that this is progress.  In comparison, Termagants are the size of large dogs rather than small ponies.  That feels about right to me.  I don't have a marine army though and if I'd spent thousands of hours building and painting an Astartes force over the years, maybe I'd feel different.  The look and feel is close enough that you can fit them into your regular army without it looking like a glaring inconsistency.  Some SM players probably won't give a toss anyway.  Just chess pieces on a board and this is another set to collect.  As long as they are 3-colour, tournament ready and WYSIWYG they will be good to go.

Still not as tall as my kitbashed Necron warriors though.  Those buggers tower over everyone! (I may be compensating for something)
Posted by Monkeychuka at 10:48 3 comments:

Falling off the edge of the Blogosphere

I wasn't completely unaware of the events unfolding in the 40k world.  But I was wary.  The carefully managed hype train and inclusive fostering of the community was quite fascinating.  It was almost a courtship.  Overwhelming endorsement of the internets is all a bit surreal really.  Even the salty element, who own a bajillion leprechaun marines secretly want to start a new army of super buff marines.  At this point it doesn't matter if the game is actually shit or not because I believe.  I haven't rolled a dice in anger yet but I'm sure this is going to be the best edition of 40k evah.  The turning point, for me, is the Return of The Swarmlord.


I watched an 8th Edition battle rep on Frontline Gaming featuring Nids vs. Ultramarines. Everybody's favourite bullet magnet, Swarmy was leading the Nids.  I fully expected him to receive yet another pasting and was not disappointed.  However, there were several points which made me sit up and take notice.  For instance, Swarmy arrived via Tyrannocyte exactly as planned.  There is no scattering or rolling for reserves in 8th Edition (Mawlocs are tactical geniuses now).  Then there was the fact that he ran 18 inches across the board and punched Roboute Guilliman in the face.   The Lord High Poobah of the Imperium himself.  That really got my attention.  This game is going to play a hell of a lot faster.  He could have won too but for some bad dice.  Robot Girlyman's counter punch was utterly devastating of course but hey, he is practically a living God who can hold his breath for half an hour in a total vacuum.  I wasn't expecting miracles.  As it was, Roboute barely made it out alive and was finished off by a handful of frickin' Termagants (+mommy).  Oh sweet, sweet ignominious death by chaff units!  There is justice in the world after all.  Of course he keeps coming back to life like the son of a God he is.  He's the daddy now in Newhammer.  Papa Smurf vs. Papa Nurgle in the final showdown of all humanity!


In a moment of weakness earlier this year I bought Deathwatch Overkill but the box remained more or less untouched for several months.  All the marines are still on the sprue (they're too small for me now.  I want the big boys) but I've been building up my GSC slowly but surely and converting many an unsuspecting Chaos Cultist to the Four Armed God.  I even found an old Chimera which I dusted off and renamed 'Limo'.

This is my first Genestealer Cult conversion.  There may not be more.  Its more of a vignette really and my favourite Scion, Septimus Clegg makes a comeback.  Not sure how Septimus is going to get out of this one.  But he'll think of something.  Anyway,  the small child inside me which used to stay up all night on Christmas Eve because he was so excited by the prospect of new toys is awake.