The plural of Carnifex is 'Carnifexes'.  The contents page of the Tyranid codex plainly states this, so I don't know why I was wondering whether it was 'Carnifexen' or 'Carnifices'.  It just goes to show what an overactive imagination gets you.  In any event, I am now running a couple of them in my list and actively enjoying them.  (I have played all of 3 games with them so far, so this makes me an expert). 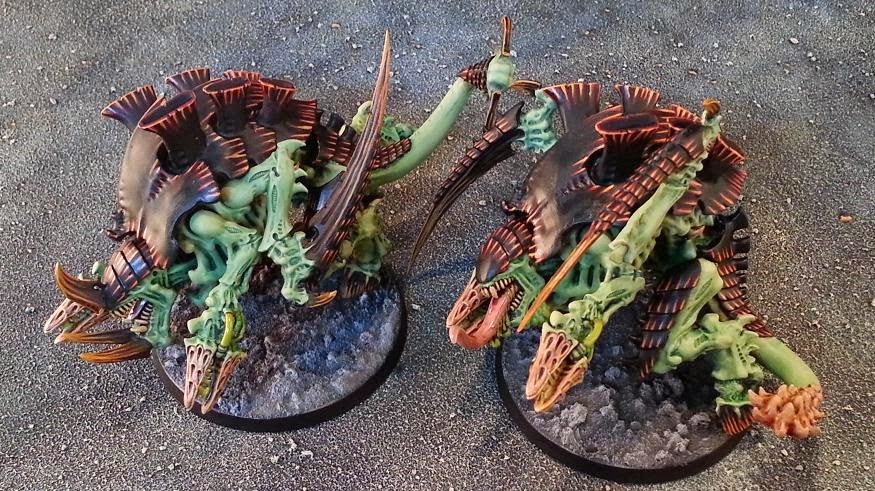 I really like the model with its hunched, menacing thorax, bullet shaped head and club like tail. I didn't want to change much apart from the weapons and posing. I converted mine into Dakkafexes by re-purposing the Deathspitter arms in the box with Termagant devourers. I cheated a bit by leaving a pair of scything talons on the model but this is only for show.  The devourers make the beast more expensive but they are still much, much cheaper than the old 5th Ed versions.  Its not exactly an original idea but I found that swapping out scything talons for 2 pairs of twin linked brainleech devourers to be more versatile.  Now effective at range, the Carnifex can still peel open a tank like a banana. I also prefer the Living Battering Ram rules in 6th Ed. and the slightly increased initiative. They lose an attack without 2 pairs of scything talons but 3 attacks is the same as 4 when you are charging and smashing.  I magnetised all the devourer arms, just in case.  Better to be safe than sorry. 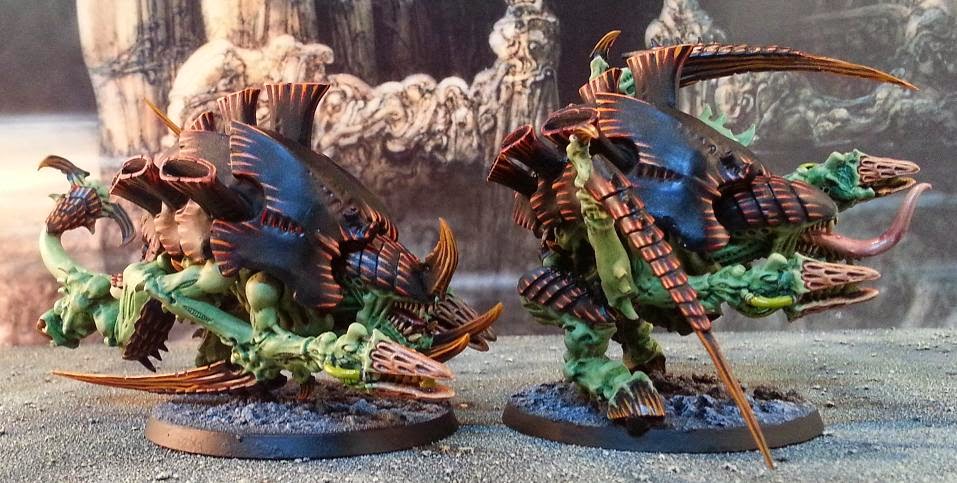 I've modelled mine with Thresher Scythe and Bone Mace tail biomorphs but I'm not actually using them.  I think tail biomorphs are a cool idea but they aren't particularly good in practice (especially when you forget to use them) and I want to keep my MCs as cheap as possible.  This is because they are going to die.  Its in the nature of Tyranids to get blown apart in messy gobs of alien ichor.

Ironically, spamming cheap MCs makes them more survivable.  Sure, my opponent shoots at them in turn 1, but a strategically placed Venomthrope helps to mitigate that.  By turn 2 he has 4 flying monsters barreling down at his troops  (Comms Relays are awesome).  Killing my comparatively squishy Warlord flyrant or grounding and pounding those pesky, vector striking Crones is often a more pressing need.  And I've never met an opponent yet who could resist atomising huge swathes of Termagants with template weapons.  The Carnifex is often ignored in the crush of target saturation.  And its easier to hide out of LoS than other MCs.

I run them both separately rather than in the same brood because I don't want them to eat each other.  The instinctive behaviour: 'Feed' is more forgiving to lone monstrous creatures.  I probably don't need to be that cautious since it amounts to play fighting where Carnifexes are concerned. They have a fairly low chance of actually damaging each other with such thick hides.  In truth, they haven't had to make an instinctive behaviour check yet because of my extremely cheesy interpretation of synapse rules for creatures inside buildings and lavish use of the 'Dominion' psychic power  (I'm loving my HiveStorm Redoubt so far, even when it was blown to bits by some cheeky demo-charge guardsmen in my last game, killing the Zoanthrope inside and scaring the piss out of the Warriors on the battlements)

Posted by Monkeychuka at 14:13 No comments:

I decided to start listening to audio books whilst painting.  Specifically, Horus Heresy dramas from Black Library.  This seemed like a good idea at the time; its like double dipping the hobby.

With the benefit of hindsight I should probably have picked something pedestrian and calming, maybe with a classical music accompaniment.  Instead, I chose to listen to 'Butcher's Nails' by Aaron Dembski-Bowden.  I had been reading a novel by the same author previously and the audio drama gives a bit of back story on the book.   Thus armed, I felt ready to tackle my HiveStorm Redoubt and set about painting it in my normal Nid colour scheme.


I was fairly pleased with my progress, in a prosaic sort of way.  It was okaaay.  I never really liked the main bunker and firing slits, but they would suffice.  I supposed.  Then I discovered a weird effect on the model whist base coating it.  When I sprayed Chaos Black primer onto the surface of the bare insulation foam, it reacted with the aerosol and disintegrated in a really interesting way. The effect looked much more organic than my attempts with PVA glue.  However, most of the model was coated in PVA, which did not melt, and the black primer covered it just fine.  I figured that it was too late to go back now and carried on painting.


At this point in 'Butcher's Nails' I was up to the part where Angron was running amok on the Dark Eldar flagship with Gorechild.  I think it must have been the sound of the chain axe which prompted me. I suddenly decided to take the Eightfold Path with my Dremel Rotary Tool and obliterated the entire facade of the HiveStorm Redoubt.


When I came to my senses, the damage was done and I wisely left my hobby station alone for a few hours.  I've managed to repair some of the destruction and resolved to continue with my experiment in Chaos Black primer and insulation foam.  It definitely looks more 'organic' than before.  But I would say 'organic' with a rotting, diseased flavour.  Or perhaps with an acid burned carcass tone.  Ho hum.  I will finish it regardless.

Posted by Monkeychuka at 23:35 No comments:

I read a really interesting article on BOLS which discussed the origin of Tyranid names.  Crone, Termagant, Harridan, Harpy, Dominatrix are all disparaging names for women apparently.  I can fully relate to this because my Crone was such a bitch to paint.  I don't mind all the fiddly bits, the fact that it is a really detailed monstrous creature is great.  The problem is that it was so awkward to actually hold the fricken thing steady.  When I'm painting, I cradle the model in my hands, bracing the heels of my palms together and resting my elbows on the desk.  It creates a really steady platform for detailed brush strokes, but in this case I just could not get the thing comfortable in my hands.  Its too big and unwieldy and the damn tail kept snagging in my sleeves.  I strongly recommend painting this one with the wings unnassembled at the very least.  You can't even fix it to the stand, unless you want to glue it which will make it near impossible to pack and transport efficiently. 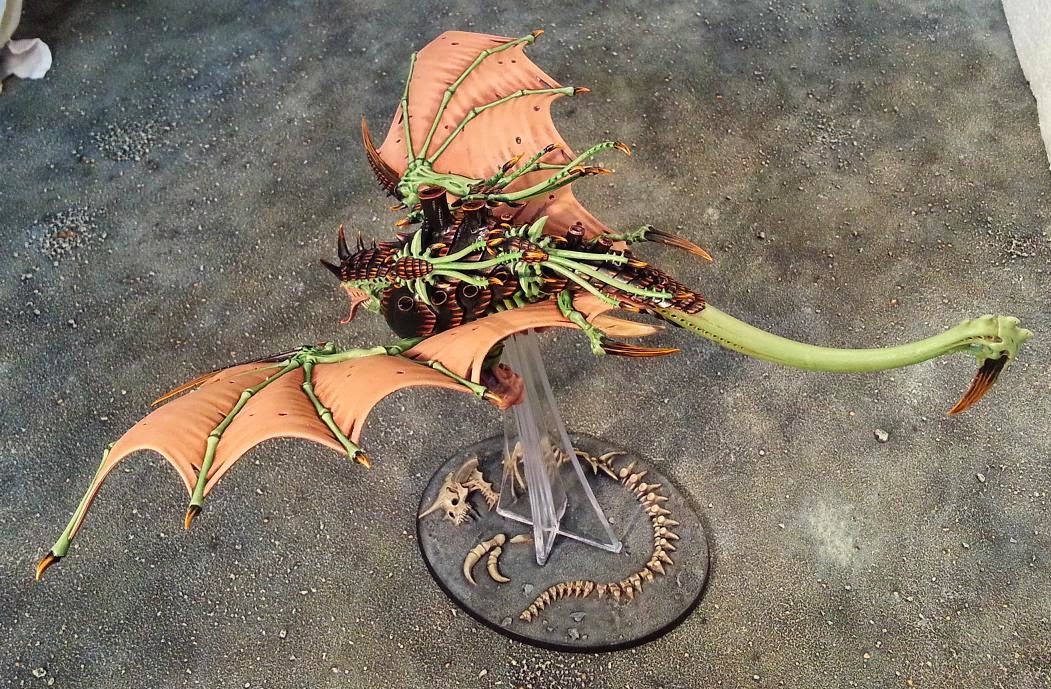 Anyway, the finished result was worth it.  The model is much nicer in person than pictures suggest. (Why do GW take unflattering pictures of their own products?  You look at the White Dwarf shots and think, "ugh, I don't want that" only to discover that the model, in your hands, is beautiful.  Honestly, take a closer look at a Space Marine Centurion, they're actually quite cool.  The glaring exception to this is, of course, the Militarum Tempestus Taurox. 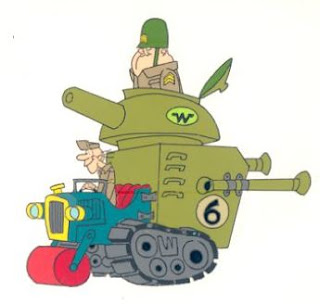 I decided to put my testiclids on top of the carapace rather than under the wings.  It makes it a bit busy and the torso looks even bulkier but I still prefer it that way.  How does the monster flap it's wings with four ruddy great trilobite things stuck on them?  Maybe they aren't attached and the little beasties just fly close to mother like baby fish.  Anyway, its too late now, I've glued the mountings.  The testiclids themselves are only blu tacced for the moment.  I need smaller magnets. 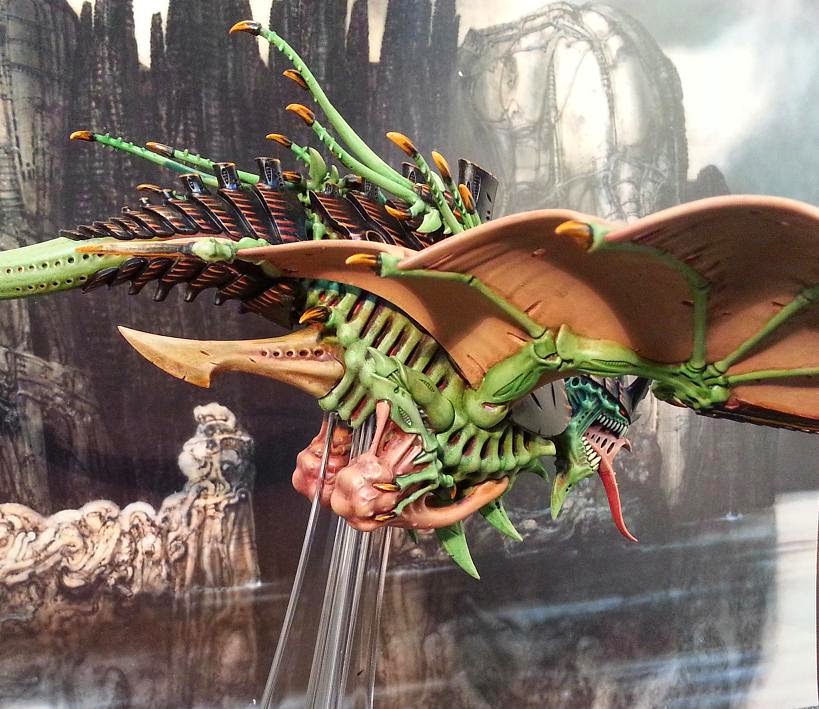 The underside of the model is possibly more interesting than the top.  Not very aerodynamic but it has lots of niddy ribs and spikes and turgid sacs.  Nice. 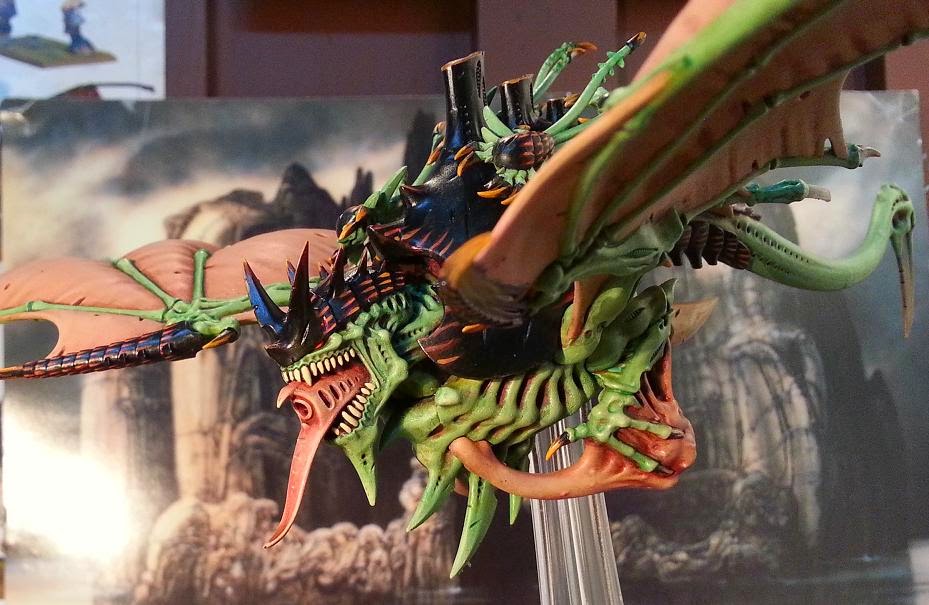 and I'm chuffed with my base: 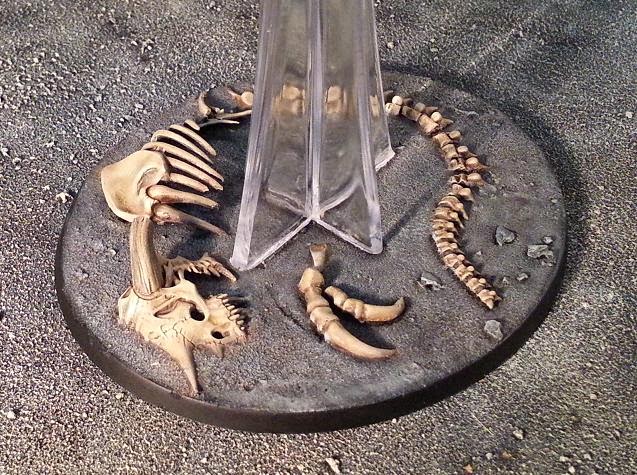