When you have more Termagant devourers than you know what to do with, you have to start being creative.  I already pulled the arms off 20 Fleshborer gants and turned them into Devilgaunts.  I used 12 more to create the twin linked brainleech variant for my Carnifexes and a Flyrant.  I destroyed about 10 of them during experimentation with fire and various household chemicals.  I'm glad I do all my modelling and painting in the garage.  My wife would never allow it in the house. 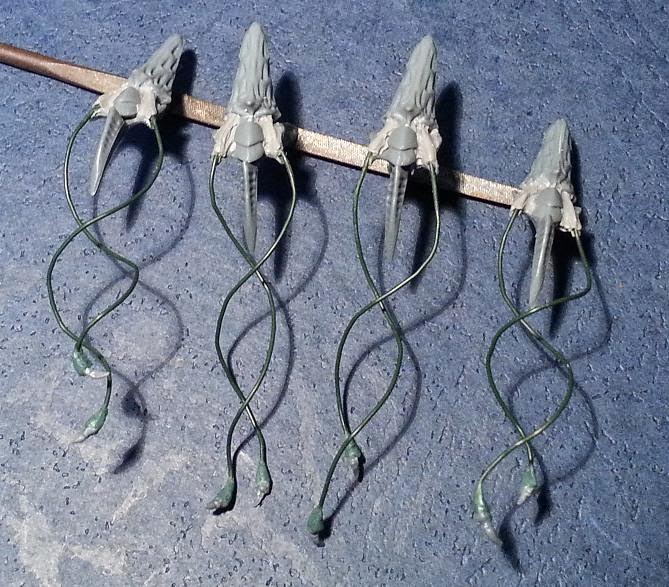 I still have literally boxes of them lying around.  God knows what I'm going to do with the Spinefist guns.  I don't even know what they do.  Are there even rules for them?  And what the hell is a "Spike Rifle"? 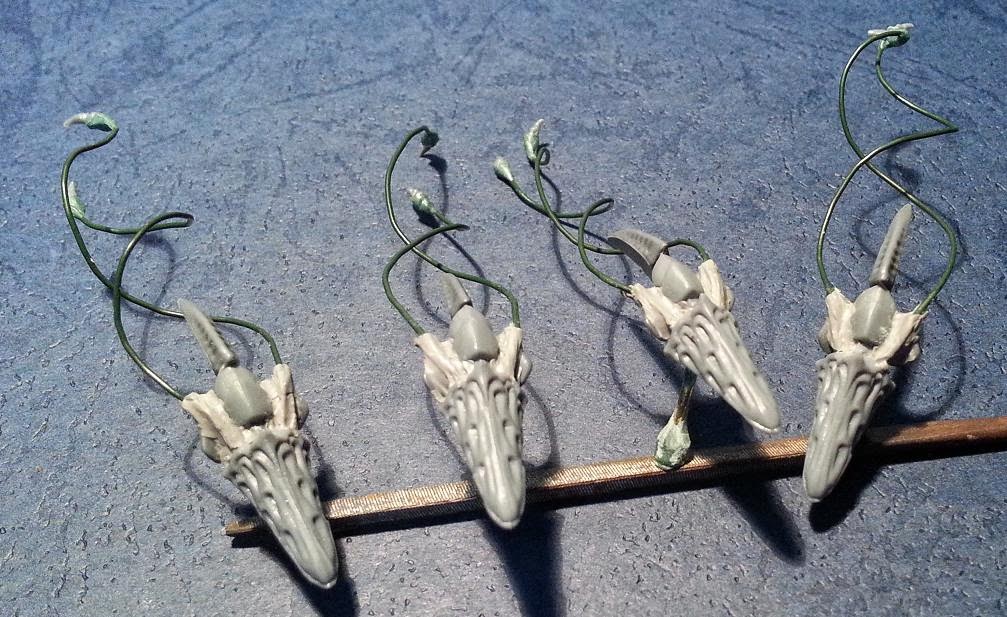 Anyway, I decided to convert my Harpy conversion into a Crone conversion.  Deciding what to make the testiclids out of was a no brainer really.  Add in a few Hive Tyrant gothic shoulder pads, a twist of wire and a bit of sticky, et voila.  4 Testiclids. I replaced the TL Venom Cannon with those bagpipe, ammunition feeder sacs.  Unfortunately they only come as left arms, since the right one holds the gun.  So I had to do a bit of chopping and grey stuffing to make a right arm which looks vaguely like the left one.  I also extended the tongue with the barrel of a Deathspitter to create the Drool Cannon.

Having just read about the 7th Edition changes to Vector Strike, I'm tempted to put all the Harpy bits back on.  Thank goodness I'm addicted to magnets.
Posted by Monkeychuka at 22:54 No comments: 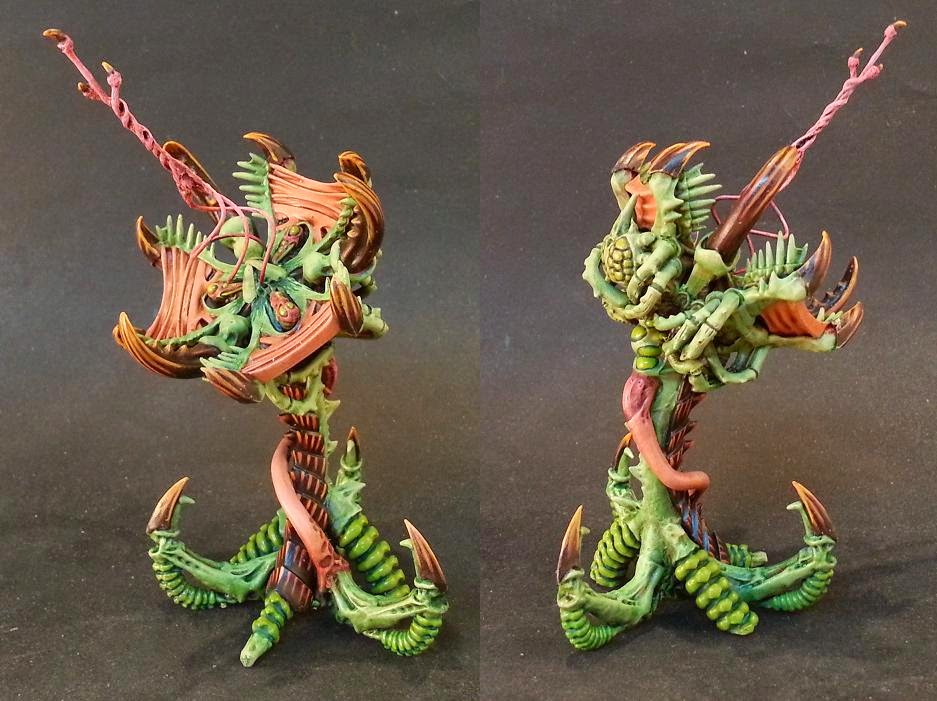 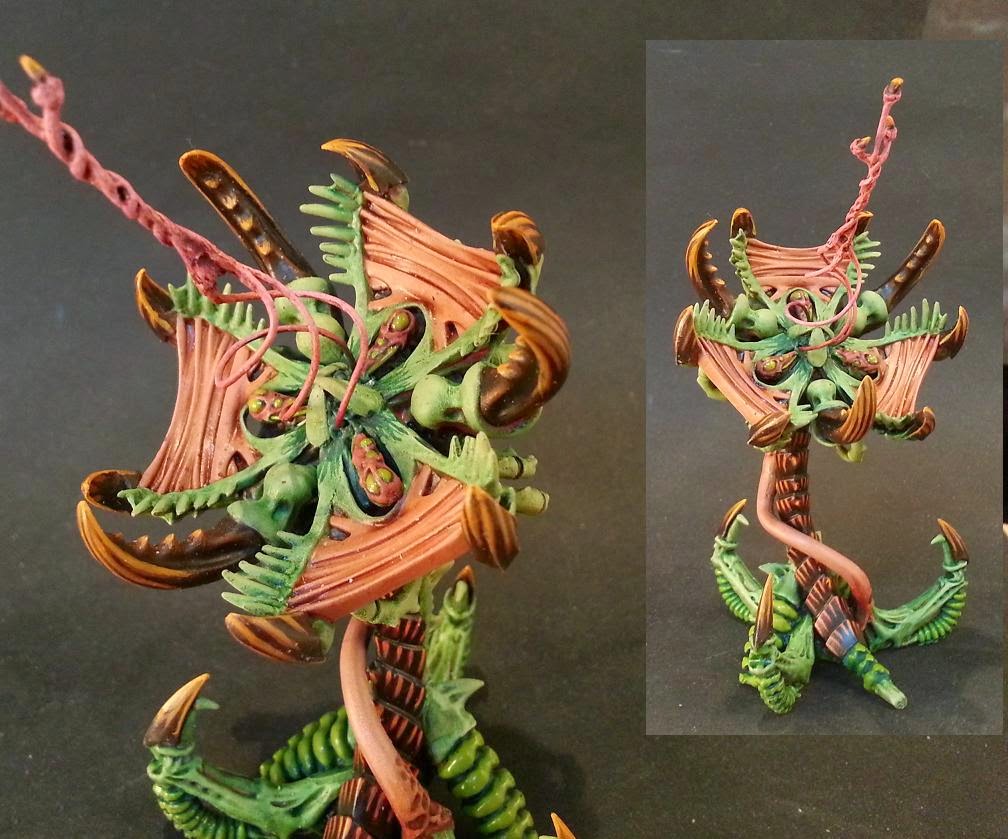 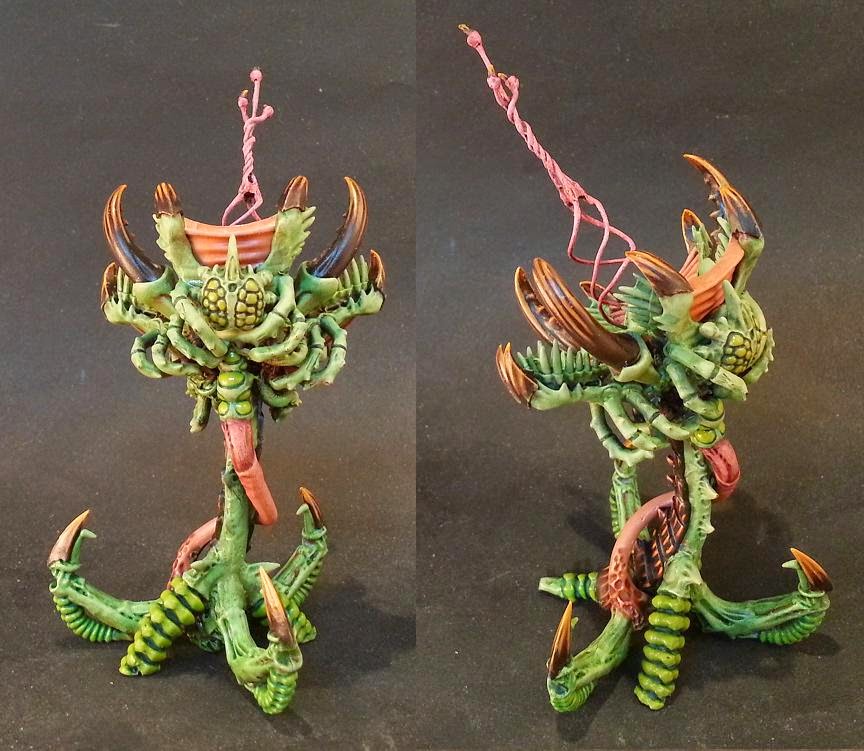 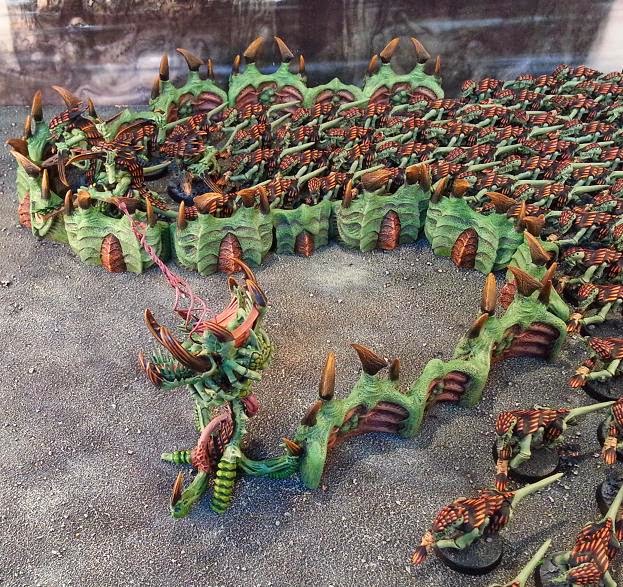 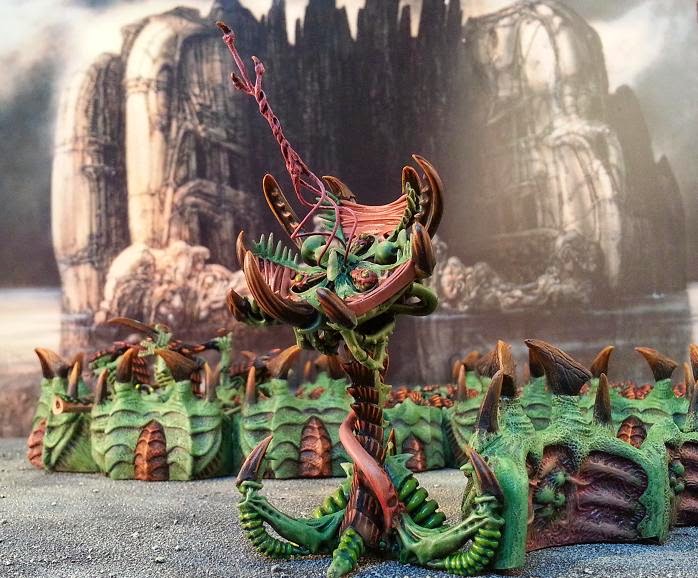 Warriors, come out to plaaay

Ok, I'm glad I didn't convert all of my Warriors into Biovores.  These were the only painted ones left:


I reinstated them with Devourers and slapped a new paint job on.  Removing the mold lines was too much of a chore so I just tried to position the models so they don't show up in the picture.


They were resurrected, not because I've changed my mind about Warriors or bought a new kit.  No, I just need more backfield scoring synapse. Tervigons, along with Primes in a gaunt blob, got nerfed so hard that it makes Warriors viable now.  I said I wasn't going to keep hating on the new codex so thats all I've got to say about that.  I kept the Barbed Strangler because the chance to pin something 36" away is worth it for 10 points.  Maybe.  I haven't actually managed to do it yet so who knows?  I'm not pulling the fricking arms off another one, so it will have to do.


My 3rd Biovore conversion is finished and as the "Law of Sod" dictates, I'm no longer playing 3 Biovores in my list.  They just haven't been consistently great in my games yet.  Good against Imperial Guard and Orks, not so good against power armoured armies, I haven't tested them against Tau or Eldar.  My spore mines are consistently killed to overwatch and every opponent I play seems to interpret the rules differently.  Its not really clear in the codex and I find that annoying.  I keep trying to squeeze 2 Carnifexes in my heavy support slots instead.  The Dakkafex always seem to be effective in some capacity and not just situational.  Ah well, I'm still having fun games with 6th Ed Nids so can't really complain.
Posted by Monkeychuka at 23:00 No comments:

Having just finished painting my HiveStorm Redoubt, I'll probably drop it from my list.  I've won most of my games whilst using the fortification which, given my skill level, probably means its overpowered and broken.  Or possibly I've just been lucky.  I've discovered recently that Twin Linking and being able to re-roll stuff in general tends to make you 'luckier'. Taken with 2 Flyrants and a couple of Crones, it has definitely given me an edge in terms of air superiority.  Its also armour 14 all round which probably isn't the intention for Tyranids. Using Void Shields is also stretching it a bit.  There is something comforting about having such a robust firebase and synapse enhancer.  However, it still gets blown up fairly easily by a multitude of different weapons (notwithstanding terrible rolling by Obliterators and Weird Boys). And when it goes 'kaboom', it does it in style, more or less killing everything inside and on the battlements.  I'm not sure its a great idea to put all your eggs in one basket, especially when it means that your entire backfield synapse bubble just disappeared in the detonation.  Can't be any worse than a poxy 6th Ed. Tervigon I suppose. 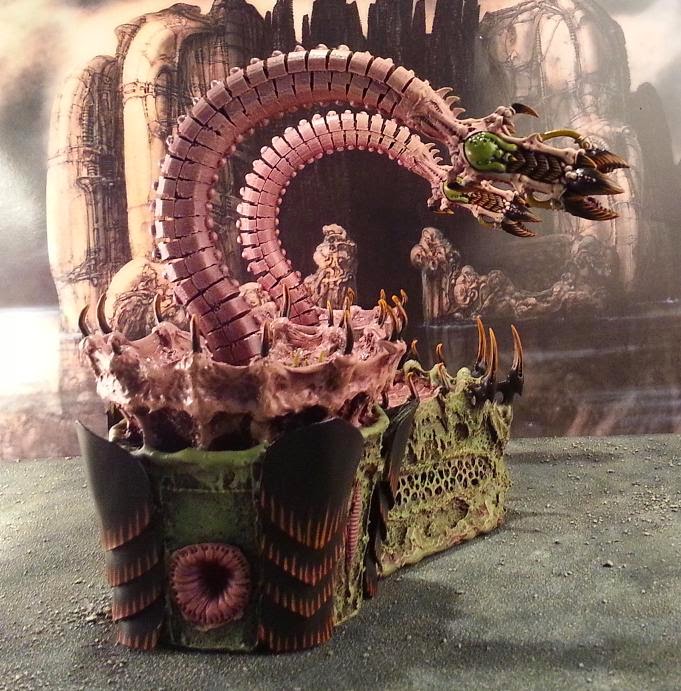 Anyway, GW will probably rule that Nids can't take fortifications in the forthcoming 7th Ed release (assuming the rumours are true) since they haven't made the appropriate models for them.  Also, I was thinking of attending the Call To Arms tournament this year and they have banned Escalation and Stronghold Assault.  So, its probably down to Aegis Defence Lines for me in future.  Which is okay because it gives me something else to paint and I've just built a cool looking Comms Relay. 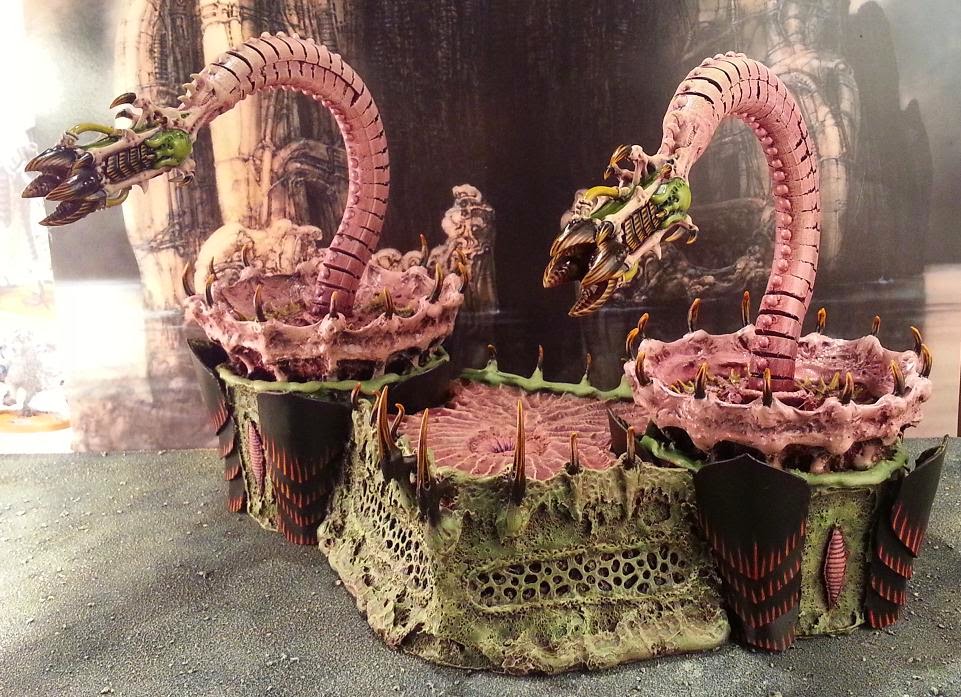 I quite like the way that my Chaos Black primer spray melted the model and I'm going to try the same method on some pieces of terrain I've got. 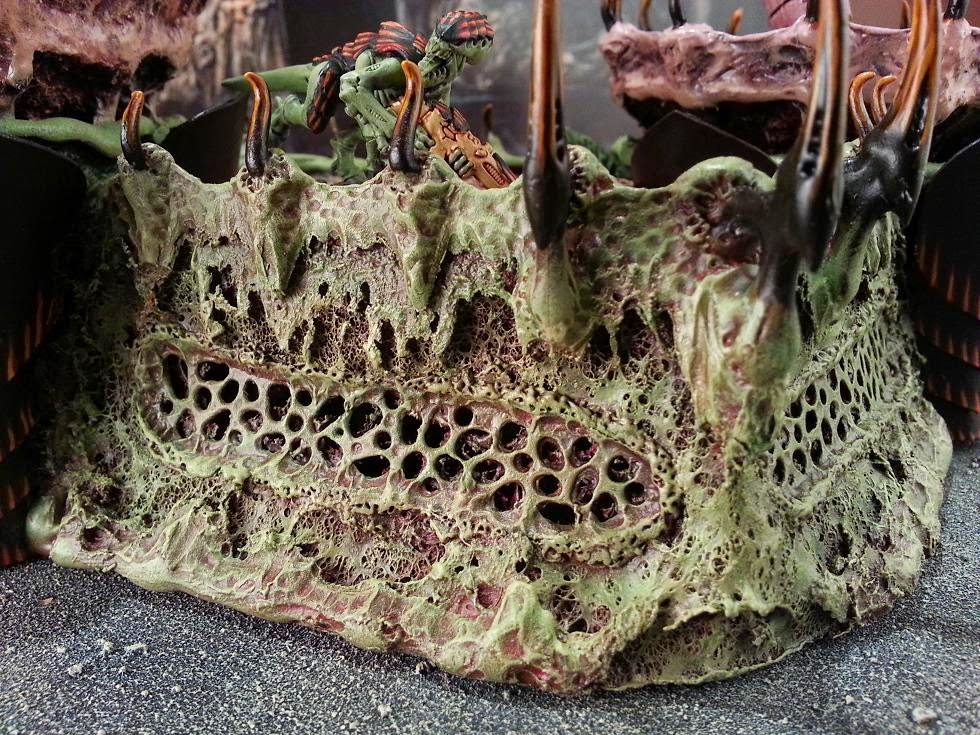 The rear of the building tends to become a bit of a parking lot for Biovores, Venomthropes and Zoanthropes.  I shamelessly hide mine from view. 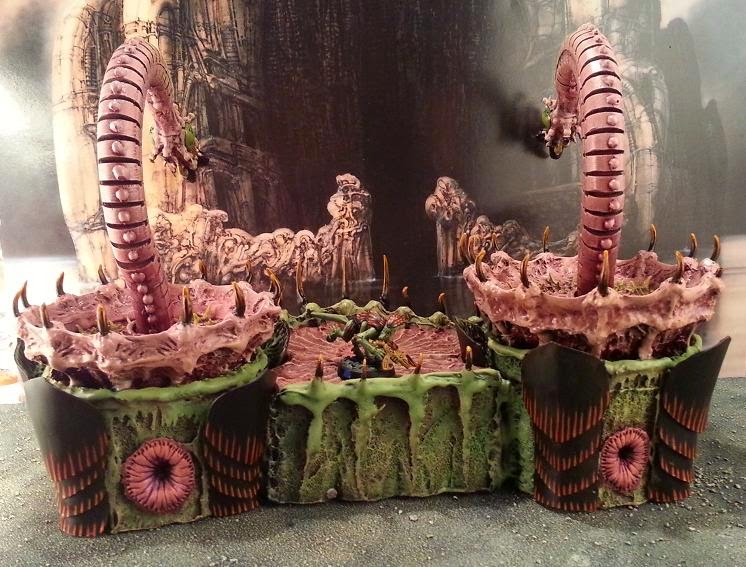 I got the chance to compare it to an actual Firestorm Redoubt at Chris's house last week and the dimensions are almost spot on.  Obviously my 'Quad Icarus Lascannons' are completely different but none of my opponents seem to mind as long as I measure line of sight and range from the base of the tentacles.