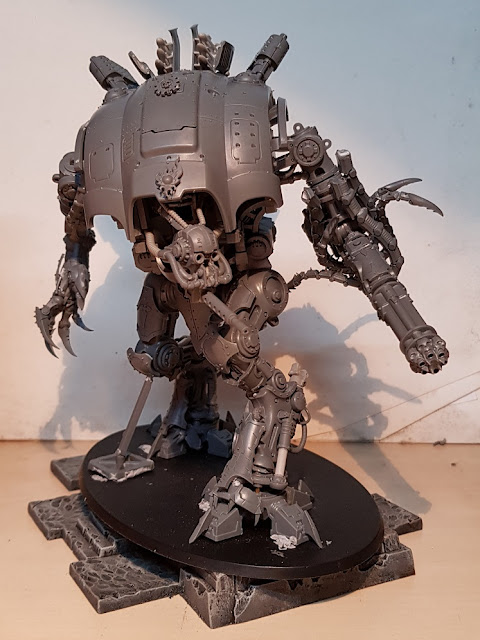 A work in progress shot of my Renegade Knight.  Of course, hardly anything is glued because it's going to be painted in a bajillion sub assemblies.  I even tried out a colour scheme for the carapace... *ahem* - armour plating.  This is Cobalt Blue Colourshift metal paint over the top of a gloss black primer.  My airbrush is hardly professional quality but I think it looks veeery interesting. 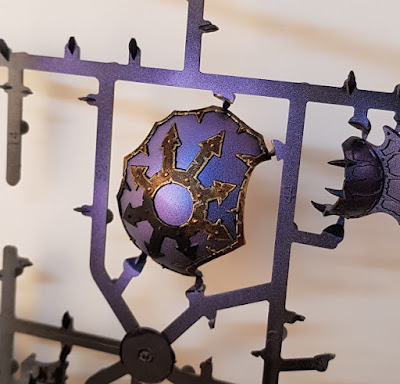 I've done a lot of work on the model but I haven't actually finished anything and tend to just sit there, patting myself on the back whilst opening another Tuatara craft beer.  It was all becoming a bit self indulgent.  I thought a blog post might help me get my shit together and determined that I should finish the legs first: 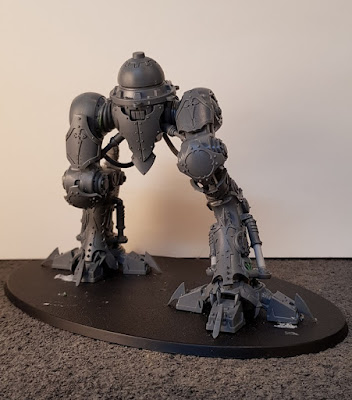 I've used quite a few bits of kit on it now and keep going out to buy new stuff.  40k is like a disease.  Brand new Maulerfiend and Heldrake kits have been sacrificed to the cause in order to make the shin guards and arms.  I think I've got enough plastic crack to finish it now. 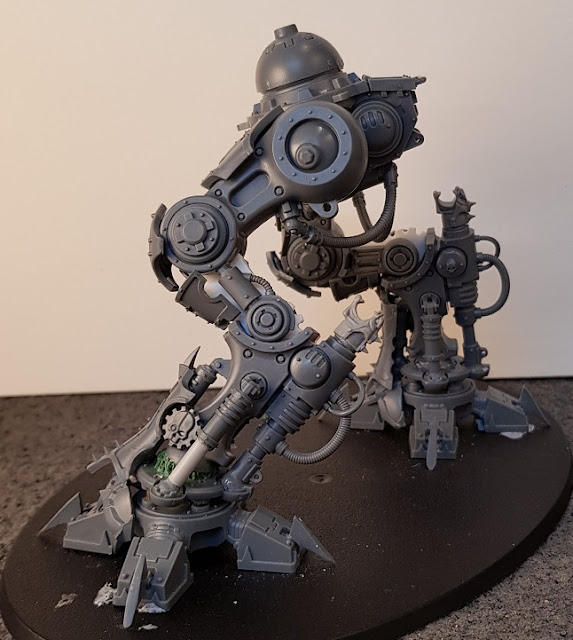 This is yet another reverse joint walker so I have named him Chickenhawk.  Lots of Admech sigils on him at the moment but I need to Chaos it up at some point.  I don't just want to stick spikes on it though. 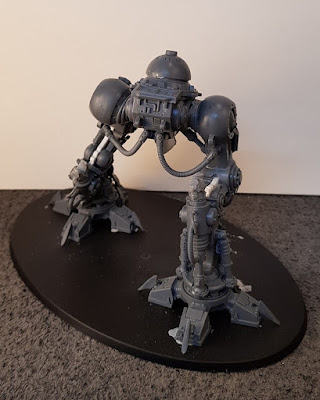 I'm currently debating whether to remove the pauldrons altogether and sculpt some fleshmetal or nurgly shoulders.  At least I've made some measurable progress. 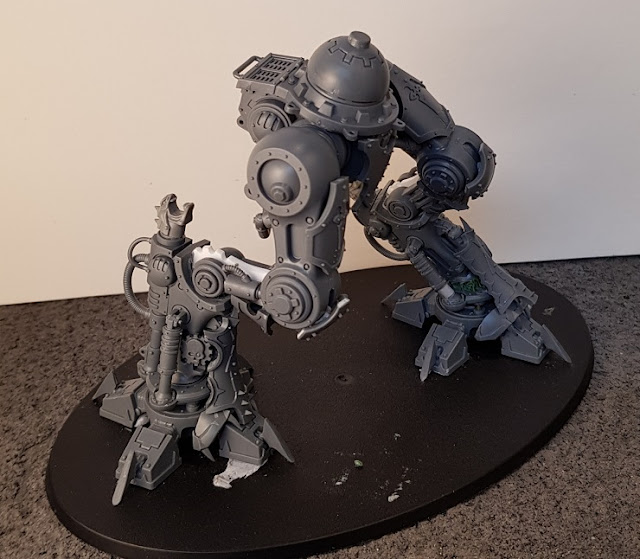 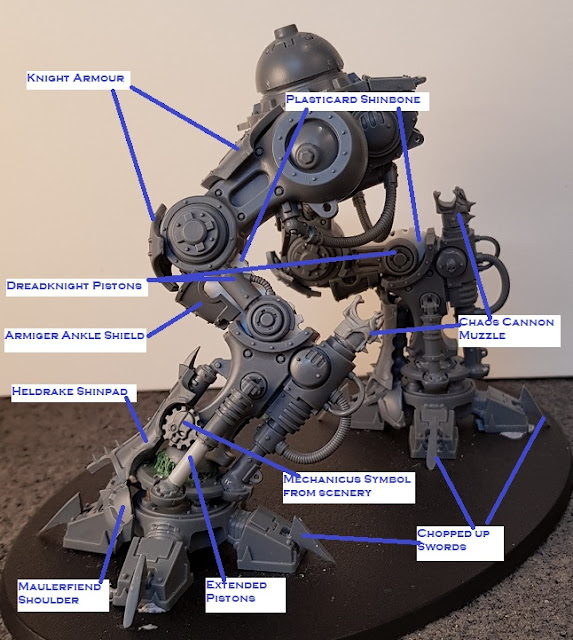 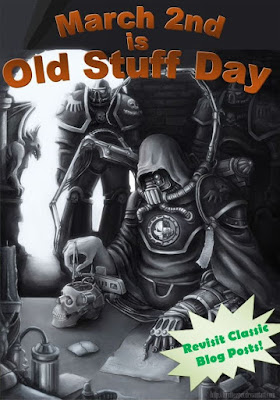 Time for a spot of necromancy in the form of  'Old Stuff Day'.

"A chance to dig up those old posts, dust them off, and maybe put on a new coat of paint for the masses." as Warhammer39999 puts it.

First off, I discovered this gem some time ago over on 'The Lead Plague':

This 5 year old post concerns the delicate and almost reverential unboxing of an ancient Rogue Trader era Chaos Dreadnought.  It rapidly descends into a kind of surreal madness and never fails to make me smile.  Undoubtedly one of the best blog posts I have ever read (although my blog digestion is a bit random), I always wanted an excuse to share it.  I strongly urge you to read it now if you haven't already.

As for my own back catalogue, I always felt that my 'Tergivon Poop' post from 2013 was sadly neglected and decided to unearth it again.  I think it has been read by several hundred web crawler servitors over the years and that's about it.

Tervigons were my first real foray into converting 40k miniatures and now that I think about it, this is probably the reason why I am still in the hobby.  In retrospect, I must commend Games Workshop's insane decision to release the rules for this beast back in 5th edition, but not the model.  After chopping up my first Mawloc and creating 'Tilly the Tervigon' (pictured on the left in the original blog post) I was well and truly hooked and went on an unprecedented 40k spending spree of such magnitude that I nearly asked my bank to defer the mortgage payment for that month.  Surely they couldn't have foreseen this unexpected outcome?  Or maybe it was just as planned.  Poor old Tilly has long since been dismembered and cannibalised for other projects.  I was never really happy with her and immediately built a second version in an attempt to improve my converting skills.  I'm happy to say that 'Gertie the Tervigon' is alive and well although she hasn't seen the tabletop for about 3 years now. 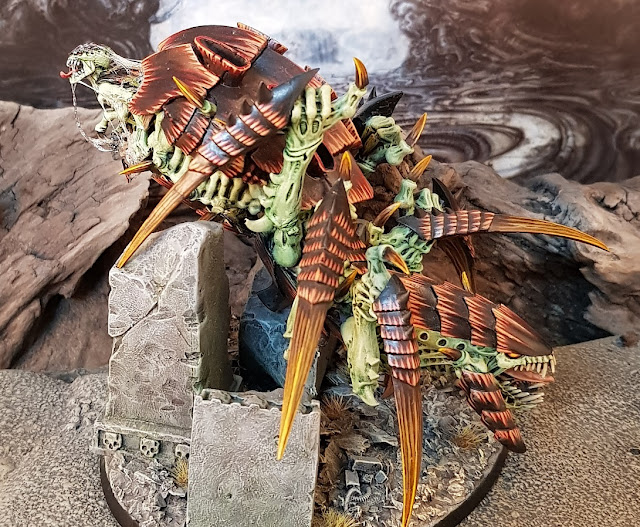 In honour of her resurrection I decided to put a fresh coat of mucus on the emerging baby Termagant.  Unfortunately, I had just come home from the pub when I began this endeavour. 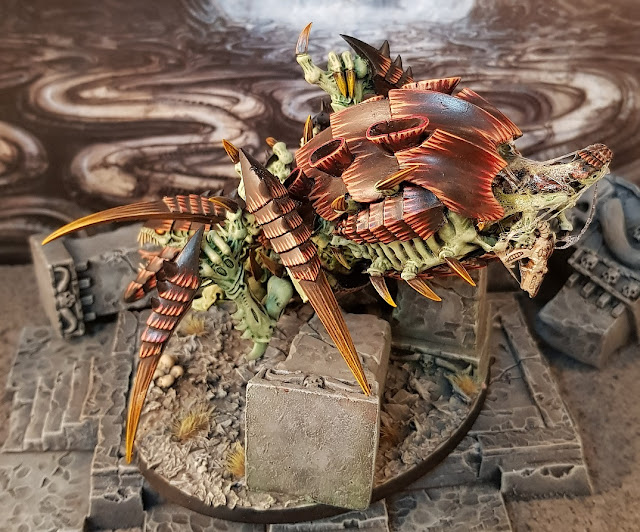 Playing with UHU glue whilst drunk is quite a lot of fun but I think I may have overdone it a little.  Not to worry, Gertie will always be beautiful to me and owns a special place in my heart. 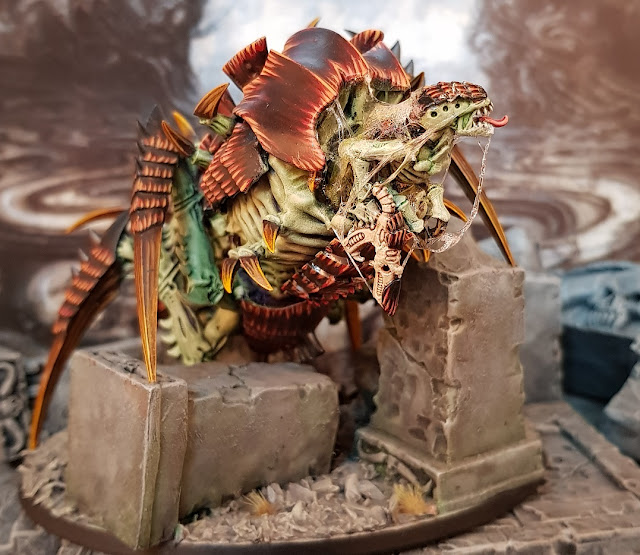