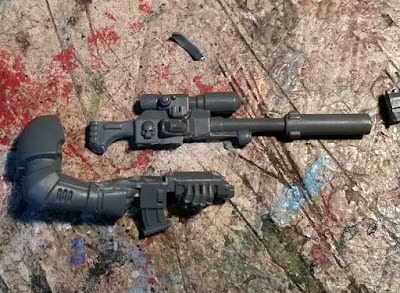 This is my third attempt to add cheap troops to my Red Scorpions.  This time, they aren't that cheap but who's counting? (apart from the T.O.)  My first attempt was a Tactical unit cobbled together from all those starter kits that I never seem to finish.  I've not even built all the models in the Dark Vengeance box which was my initial attempt to force my kids to play with me.  This first founding of marines were pretty horrible and I couldn't even bring myself to paint them. 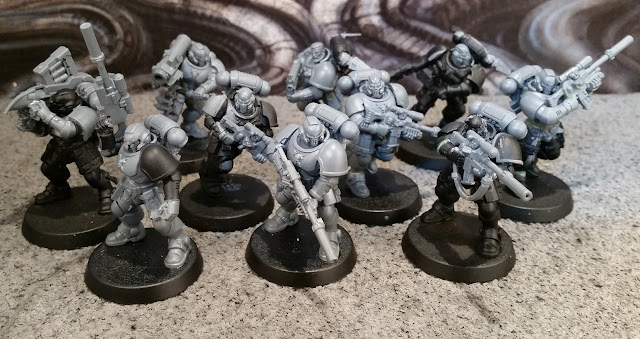 So I bought a box of Horus Heresy Mk IVs and that was better but I got distracted and Rory distracted me even further by suggesting I go all Primaris and gave me some Sniper Rifles to convert some scouts and I bought some 2nd hand Reivers and I liked them so much I bought some new ones and here we are. I'm pretty happy with these and swear by The Holy Emperor's Bedsores that I will start painting them immediately.  I've gone with a mixture of loadouts, mostly because I got bored with kitbashing sniper rifles.  I wanted to do two of the Horus Heresy missile launchers but had to use one from the scout squad kit which was a bit of a downer but I'm really happy with how he turned out.

I've left two of them as Reivers and will just pretend that they've got shotguns and go unnoticed.  I've got half an eye on Kill Team and would definitely want to build a Red Scorpions squad so I'm keen to have a variety of marines to use.
Posted by Monkeychuka at 23:09 18 comments: 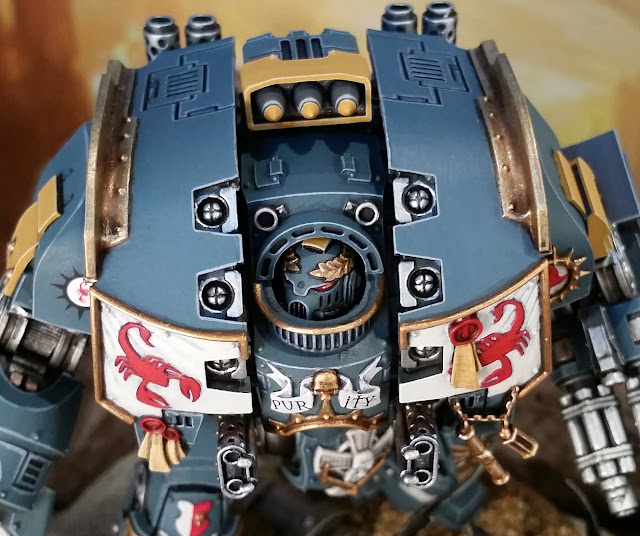 I'm beginning to run out of ideas for basing my Scorpions.  There's only so many prostrated Genestealer poses you can do before it all starts to look a bit samey.  I resolved to do something a bit different this time and came up with the notion of 'Deep Fried Nids'. 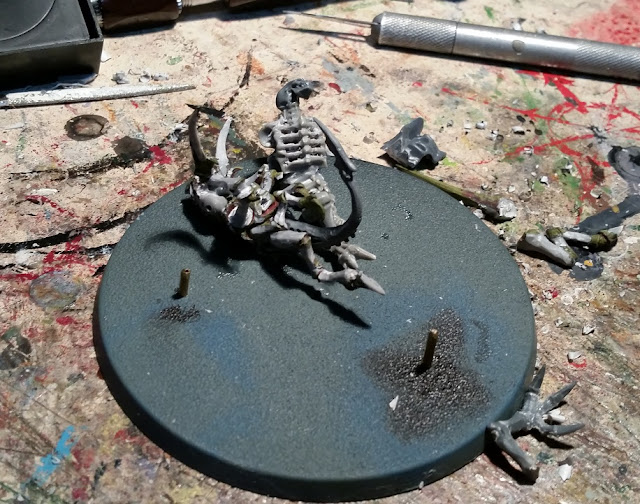 Culln himself is equipped with a rather splendid pair of chest mounted heavy flamers (much better than Magnus nipples imho) and I was pleased with my first attempt at muzzle burn.  I followed the online tutorial kindly provided by The Blessed Duncan, using yellow/purple/blue washes but I thinned mine with airbrush/glazing medium to make it a bit shinier and applied two thin coats. Therefore, it seemed natural that I should pose this behemoth standing over the crispy remains of some unfortunate gribblies.  Plus, I figured it would be extremely easy to paint them.  A bit of grey drybrushing over the black primer and thats it!  Best colour scheme ever! 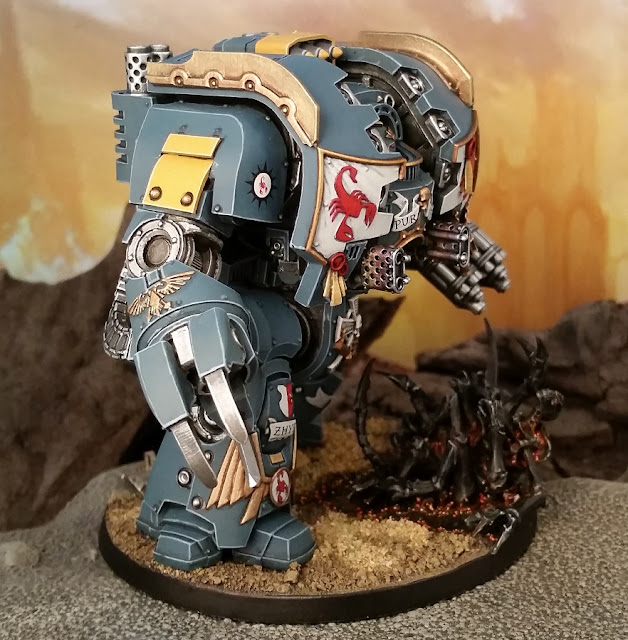 Naturally, I went off at a complete tangent and started dicking around.  My chosen victims (a Genestealer and a Hormagaunt) were way too fat and juicy to look like they had just been incinerated by a pressurised jet of super heated promethium.  So I had to carefully pare down the limbs and drill the rib cages in order to make them more skeletal.  Technically, this might not be the correct way to make Tyranids appear melted.  They are encased in some sort of weird exoskeleton which probably means they cook from the inside and the flames would not necessarily melt flesh from bone. Or maybe thats just the chitin (pronounced 'Ky-Tin' folks.  Don't say it wrong or your kids will take the piss out of you forever).  Maybe its just like chitin armour and they have endoskeletons too. 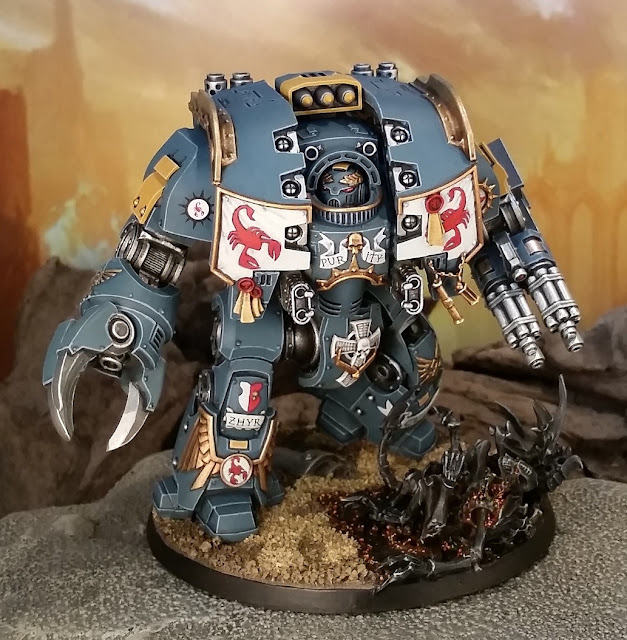 So I'm going for suspension of disbelief rather than realism.  Realistic Tyranids would probably be more microscopic than gargantuan anyway.  In fact, they probably wouldn't even be vertebrates.  Dispersing a hyper-acidic flesh eating disease that just floats around in the atmosphere has got to be more efficient if you are trying to devour all planetary life. It melts the shit out of everything which then drains into the sea and you simply hoover up the oceans and lakes with half a dozen capilliary towers.  Surely this is much better than evolving bizarre strains of six-legged dinosaurs which have to gambol across the table and eat you?  Not as much fun, admittedly. But I digress and this is 40k dammit!  I can do what I like! 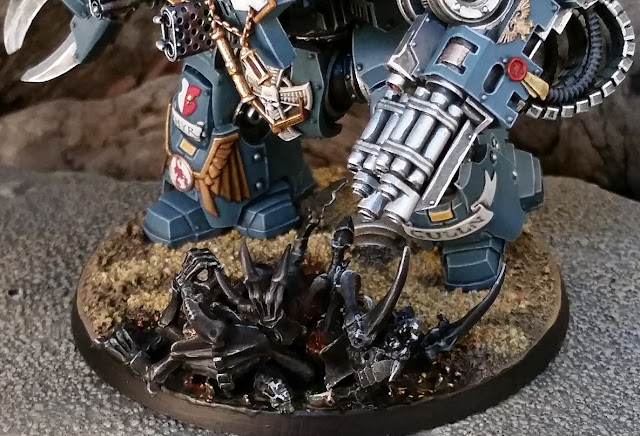 Anyhoo, the skinnier nids looked quite nice on the base but when I painted them the effect was less than pleasing.  They looked exactly like what they were; unfinished black primed models with a hasty drybrush applied.  So I washed everything in black and added the highlights a bit more carefully this time but that still didn't look much different.  I then attempted a bit of 'pontillism' around the edges to try and give the effect of the grass still burning where the promethium splash had landed.  That was ok but the models themselves were boring so I applied the same technique in the crevices.  Lashings of red glaze seemed like a good idea too.  It still didn't look right but it did look cool (to me, at least) so I left it at that. 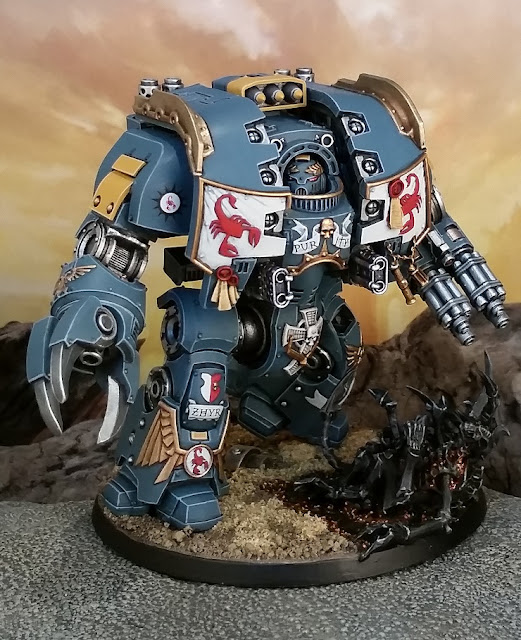 Painting Carab himself was not very exciting really.  I used the same techniques that I've used on all my other vehicles/walkers.  Plus he was broken down into sub assemblies (hilariously, I glued the top torso panel in place before the head which subsequently wouldn't fit through the gap in the gorget.  That was a tense few minutes with a pair of tissue-wrapped pliers, I can tell you).   I did change things up a bit with a bronze effect on some of the decorative trim and that was fine but I still can't get it to look like Jordan's.  Culln is a very detailed model and it took a while.  The more I painted, the more I realised how bloody good those Forgeworld painters are. 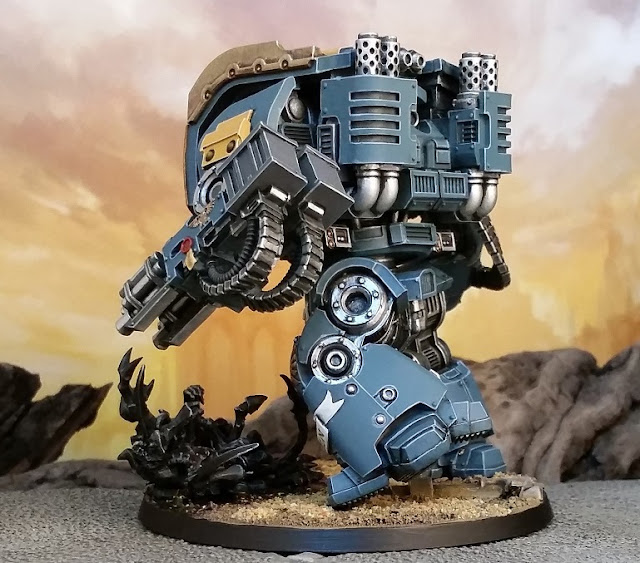 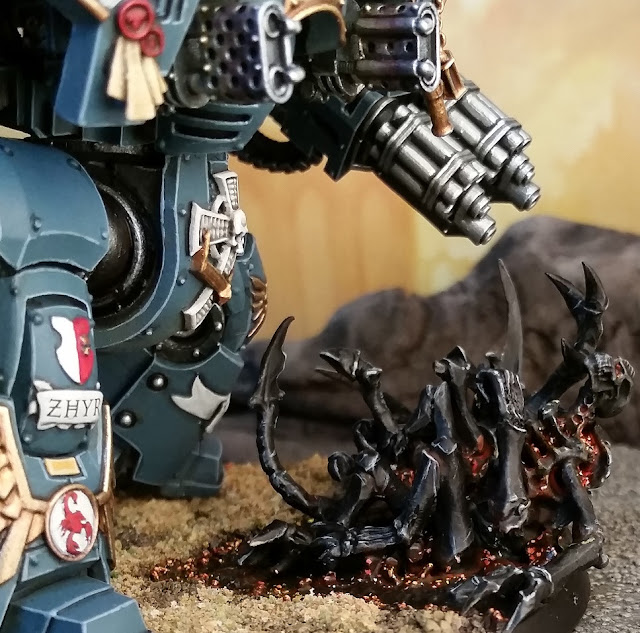 I just realised that the presence of Genestealer skulls in the Citadel miniatures range indicates the existence of an endoskeleton doesn't it?  Come to think of it, Old One Eye's skull is clearly visible too with half his face ripped off. 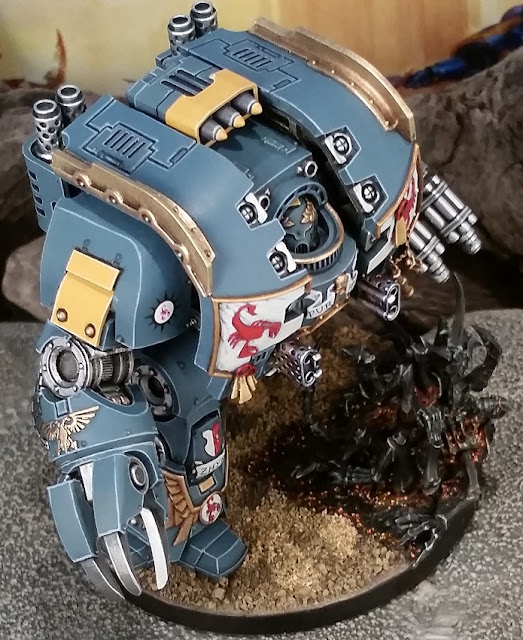