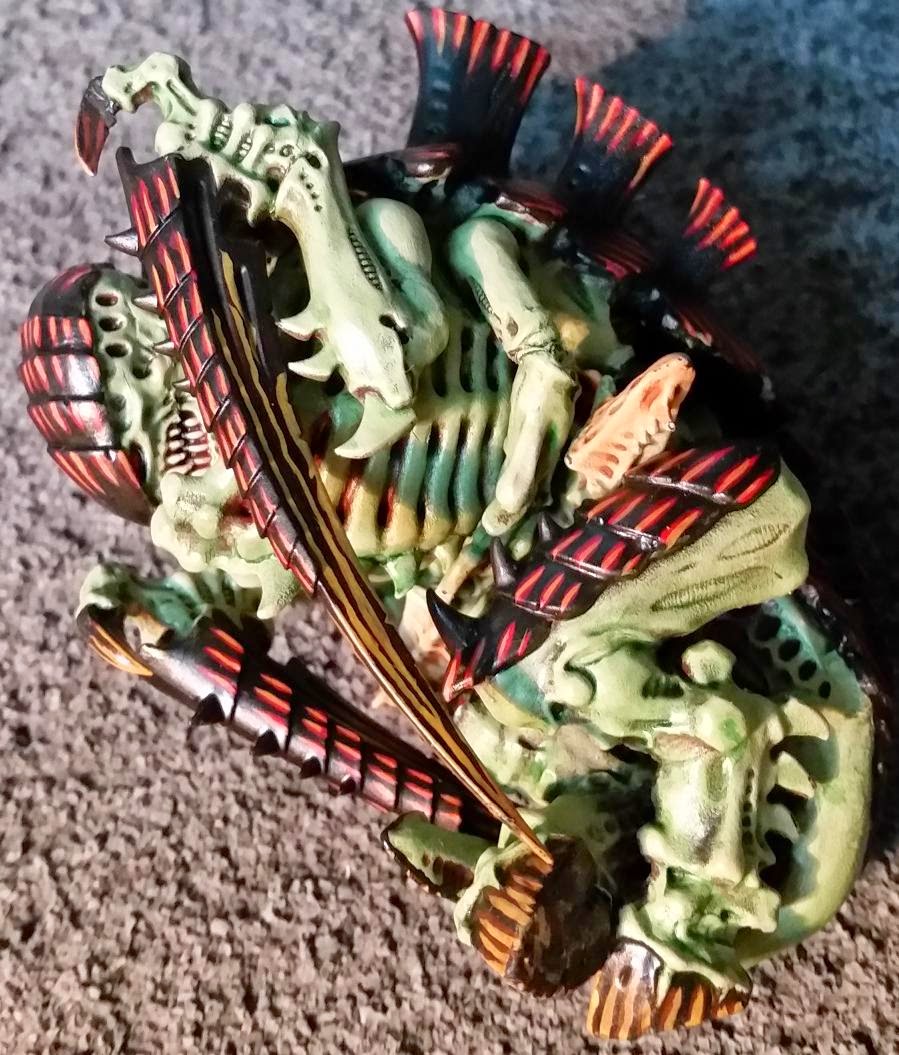 Don't worry, he's only sleeping.  He's a Snoozafex (thanks Remalis, I can't get that out of my head now)


Well, thank Christ thats over is all I can say.  I will never, ever paint another Tyrannocyte ever again. Cross my heart and hope to die.


Part of the inspiration for this conversion was a display at my local doctor's surgery when I was a boy.  It was a 'cut away' model of the human body cavity and apparently you could remove the organs.  Because I was a child, they would never let me play with it but I always wanted to take the liver out and see what was behind (my father would frown disapprovingly and tell me to come away).  Stupid adults. What is the point of making such a wonderful 3D jigsaw puzzle if you can't play with it?  I like to think I'm working that childhood obsession out of my system.


I've decided not to paint him sleeping after all.  I think a baleful eye staring back out at you when you examine the model closely is much more disturbing.  I'm not really into blood and guts as a rule, but I love seeing the moue of disgust on my wife's face when I show her my latest project.  Gertie actually made her recoil in horror when I first basecoated the Tervigon in black.  She hates spiders.  I still consider it one of my finest modeling moments.  Her comment on this Tyrannocyte was,

"There's something wrong with you."

More than meets the eye

First out of the gate is the Tyrannocyte transformer.  I am still tweaking the revisions I made on the last minute changes on the pregnant version (i.e. procrastinating).  Also, the tongue fell off because I kept trying to re-position it, which made me scream in frustration.  I decided to post pictures of the finished one to take my mind off things. 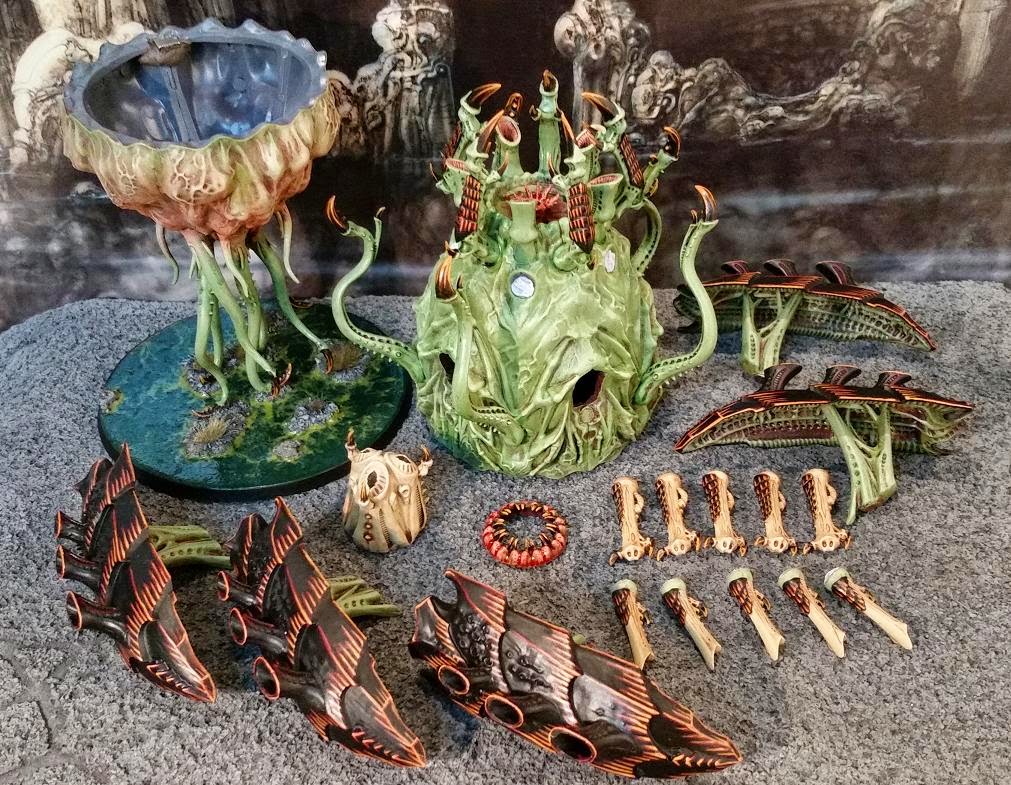 Here it is in pieces ready to be snapped together.  I have not magnetised the guns, for two reasons.  First, I've run out of magnets and second, if I spend any more time on the model I will go mad.  I have decided to glue the venom cannons in place.  A decision which I will no doubt come to bitterly regret in the fullness of time. 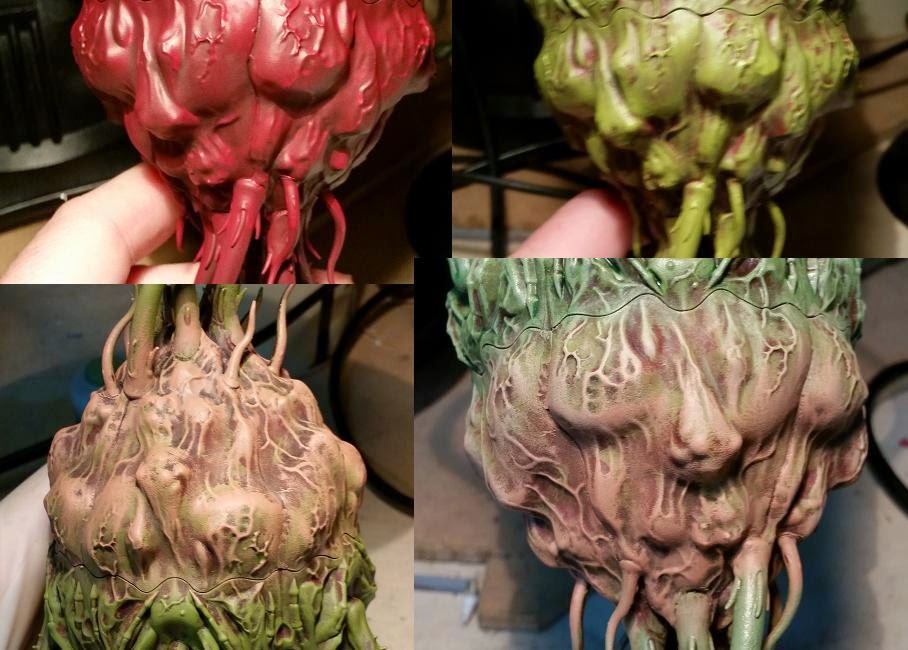 A quick tutorial on how I did gas sacs.  Model is base coated Khorne Red and over brushed with Elysian Green as usual.  Then I flip the model over and dry brush downwards with Cadian Fleshtone.  All steps are done with a large drybrush in a deliberately slap dash way so that the colours underneath are showing.  I turn the model back the right way round and highlight (again with large drybrush) using Ushabti bone.  If it leaks into the green bits then it doesn't matter because they are highlighted with Ushabti/Nurgling green.  Reikland Fleshshade and Carroburg Crimson washes are then applied with a bit of glazing medium and water. 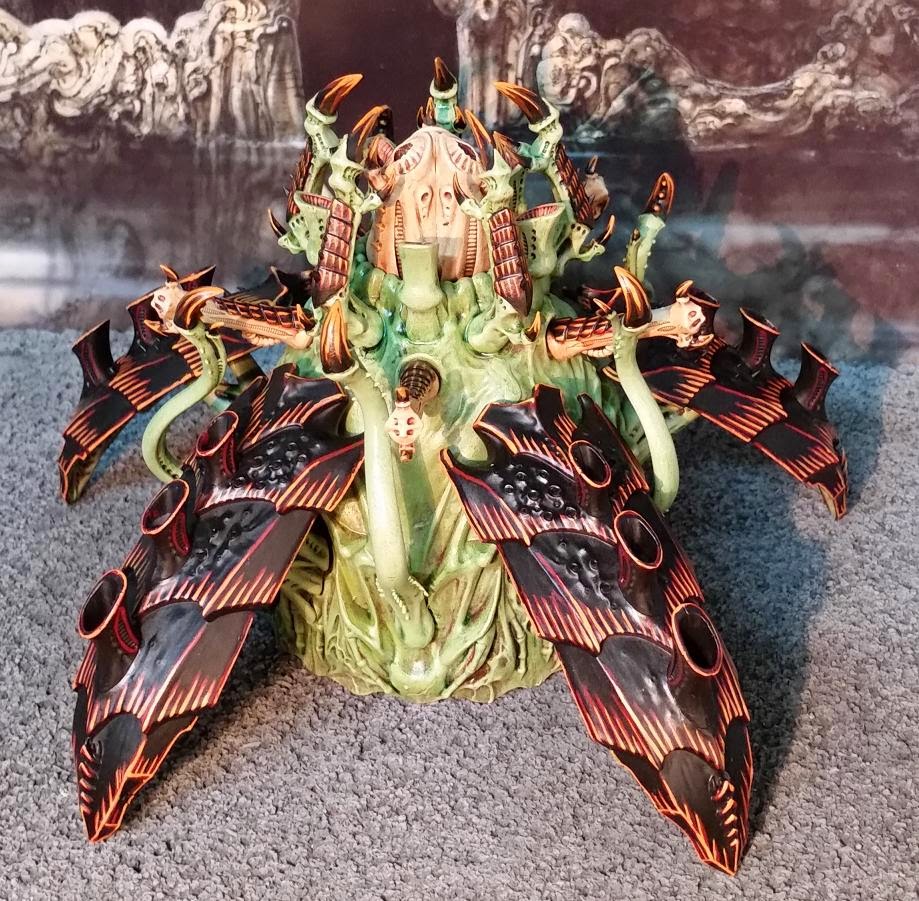 This is the Sporocyst loadout which I will never use in games.  Of course, if I hadn't built a Sporocyst version then they would unquestionably have become an 'auto take' in the next version of the Tyranid codex.  Murphy's Law. 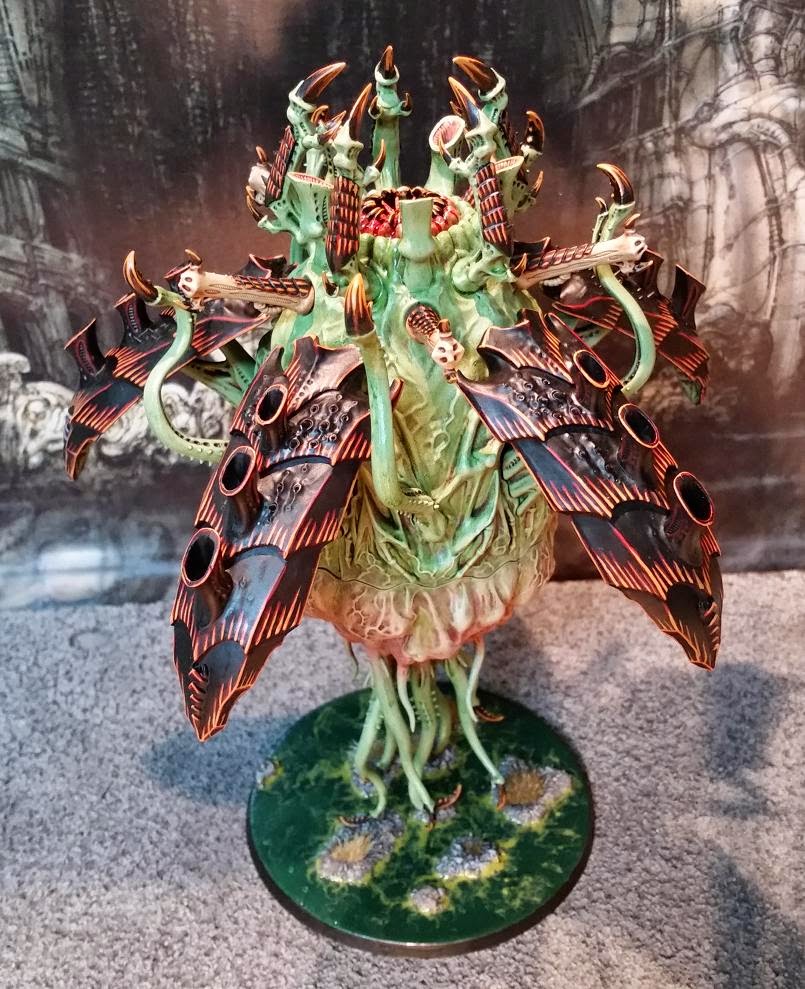 I think this is my favourite configuration.  A Tyrannocyte with the air-brakes deployed. 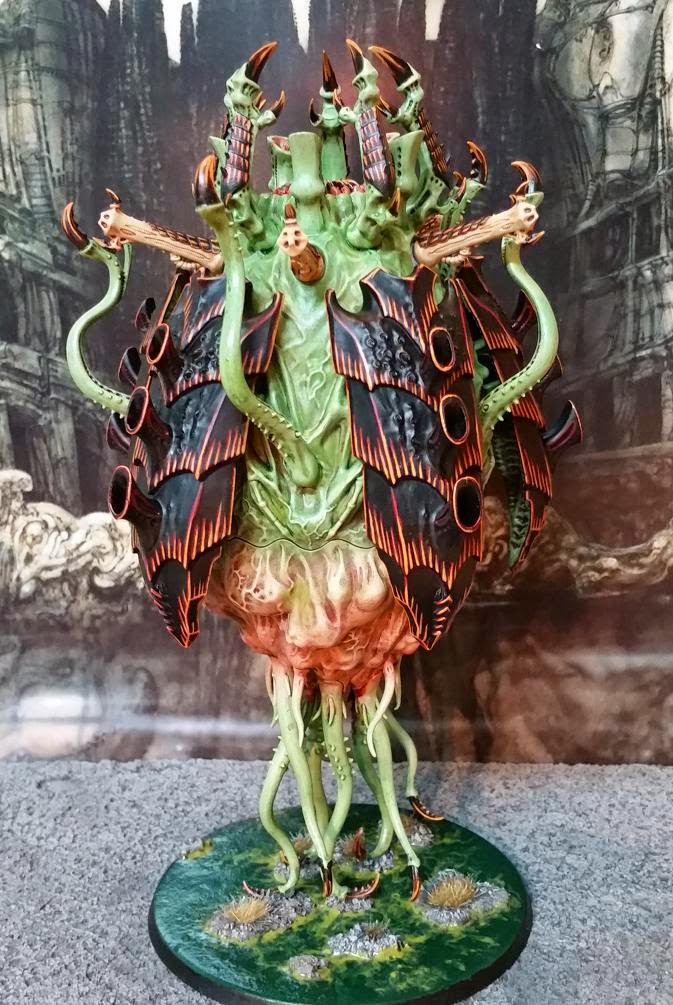 Air-brakes retracted.  This will make transportation much easier and it matches my other two. 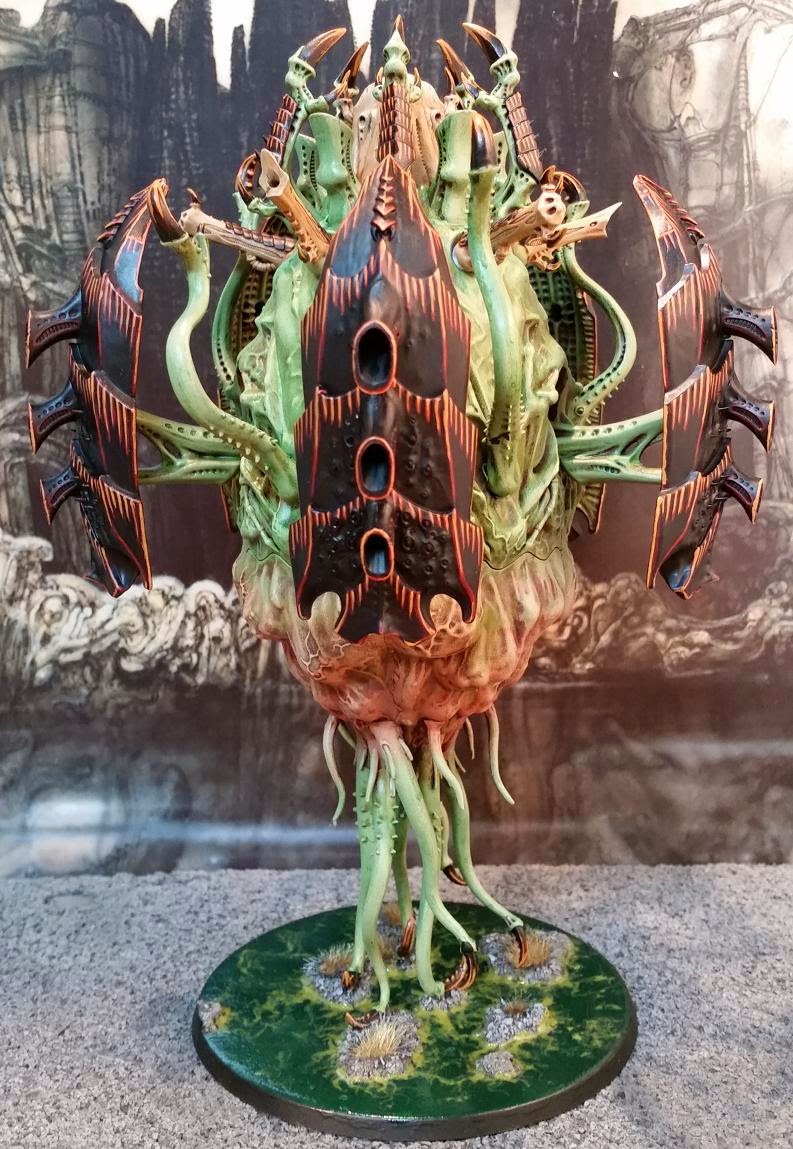 I contemplated using the air-brakes upside down but they are a bit wobbly and it looks stupid. 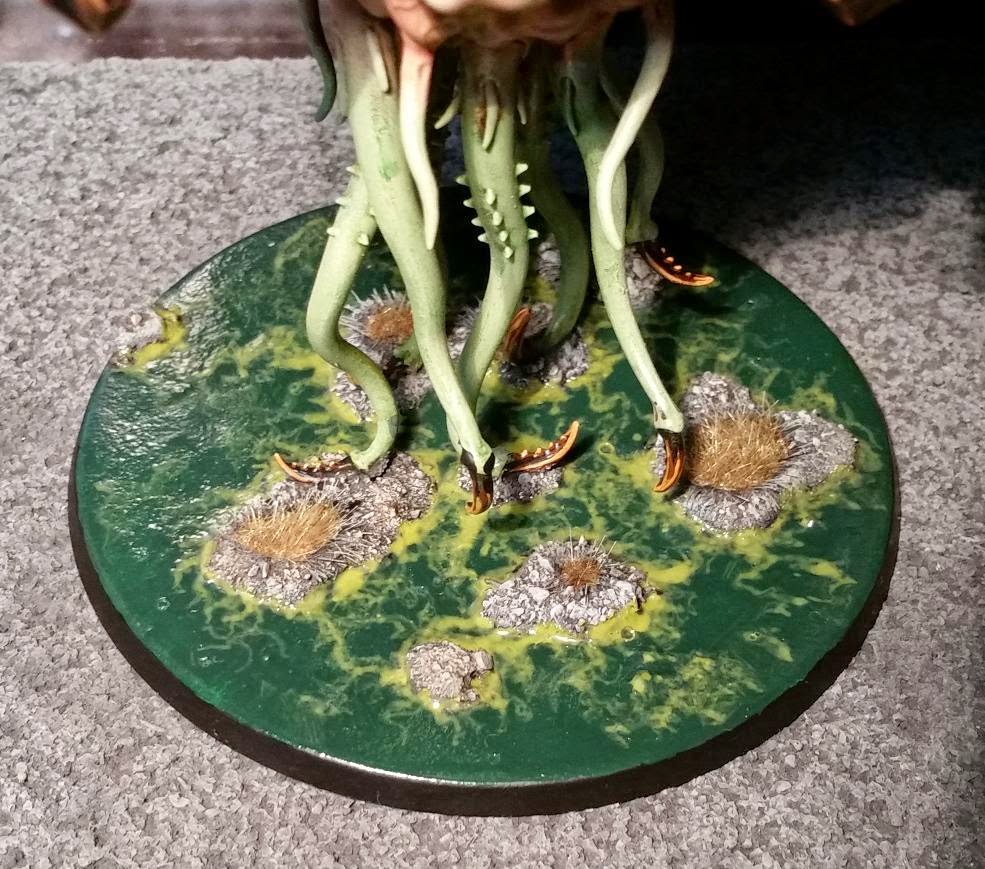 The base is bits of sprue, forming little islands in a sea of digestive fluid with lashings of Nurgle's Rot in between and a gloss varnish.  When I post the next Tyrannocyte version it will become apparent why I did it this way.  I quite like the effect and have used it on other models as well as terrain so it should blend in with my army.
Posted by Monkeychuka at 02:02 2 comments:

Apathy setting in.  I have finished the inside and you can see the sleeping Carnifex bottom right.  In an attempt to be more efficient I'm doing my second Tyrannocyte conversion at the same time.  The outside is boring as hell.  The thought of doing three layers of striations on ten more carapace airbrakes is nauseating. Only blogging can save me now.  Must...  Finish...  Painting. I found this on the deck outside the other day.  It was laying eggs so I took a picture.  I dream of eggs.  I am obsessed with eggs.  Its not even Easter anymore.  Is it a preying mantis?  I am not sure. 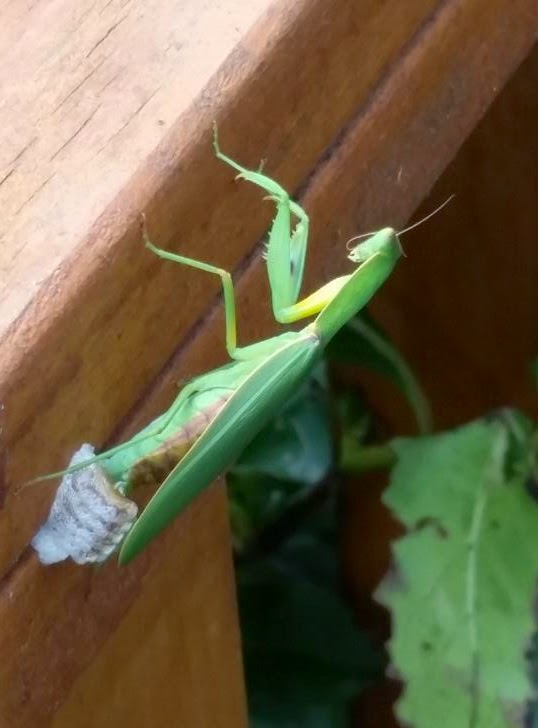 Email ThisBlogThis!Share to TwitterShare to FacebookShare to Pinterest
Labels: Tyrannocyte

Conversion is finished.  Kind of.  The model is too intricate to paint assembled and remains in pieces.  I haven't even glued/magnetised it to the base yet.  I need to paint various parts (Carnifex, tentacles, mandibles, carapace) separately and I hate doing that.  Spending hours meticulously highlighting vents or claws only to have them completely hidden when glued together is annoying. Or putting all the light tones on what turns out to be the underside of the leg.  However, since I've built the Carnifex to be completely removable and sought to re-create the visceral innards in gory detail, I deserve nothing less. 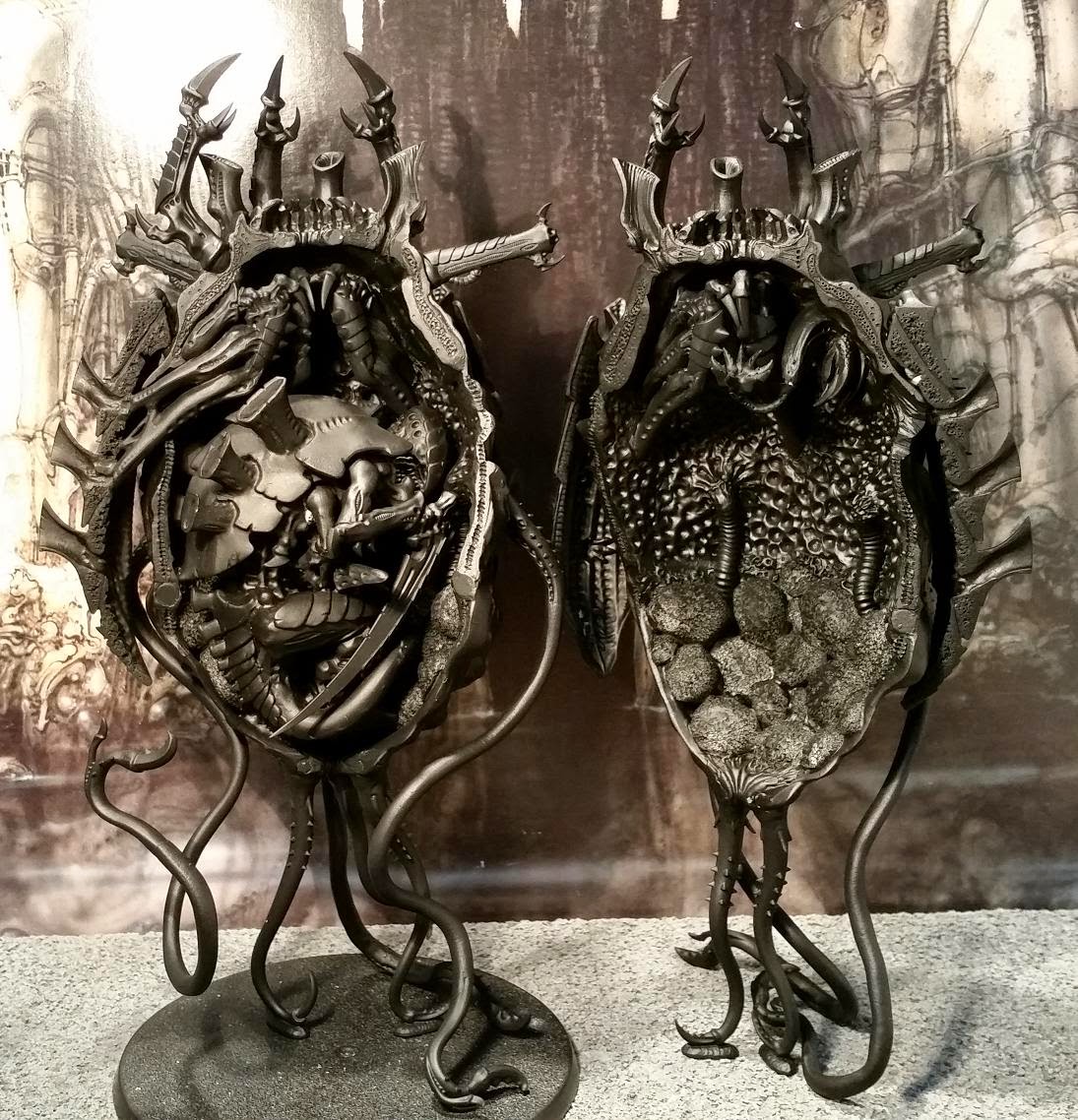 I suppose I should pay attention more on this one but I tend to zone out whilst painting.  Trying to reach a meditative state, I usually end up thinking about practical Unix terrorism or what to make for dinner.  Either that or listen to music/podcasts.  Audiobooks are now banned whilst painting since my Chaos inspired destruction of the Firestorm Redoubt last year.  Truth be told, I've got none to listen to at the moment. 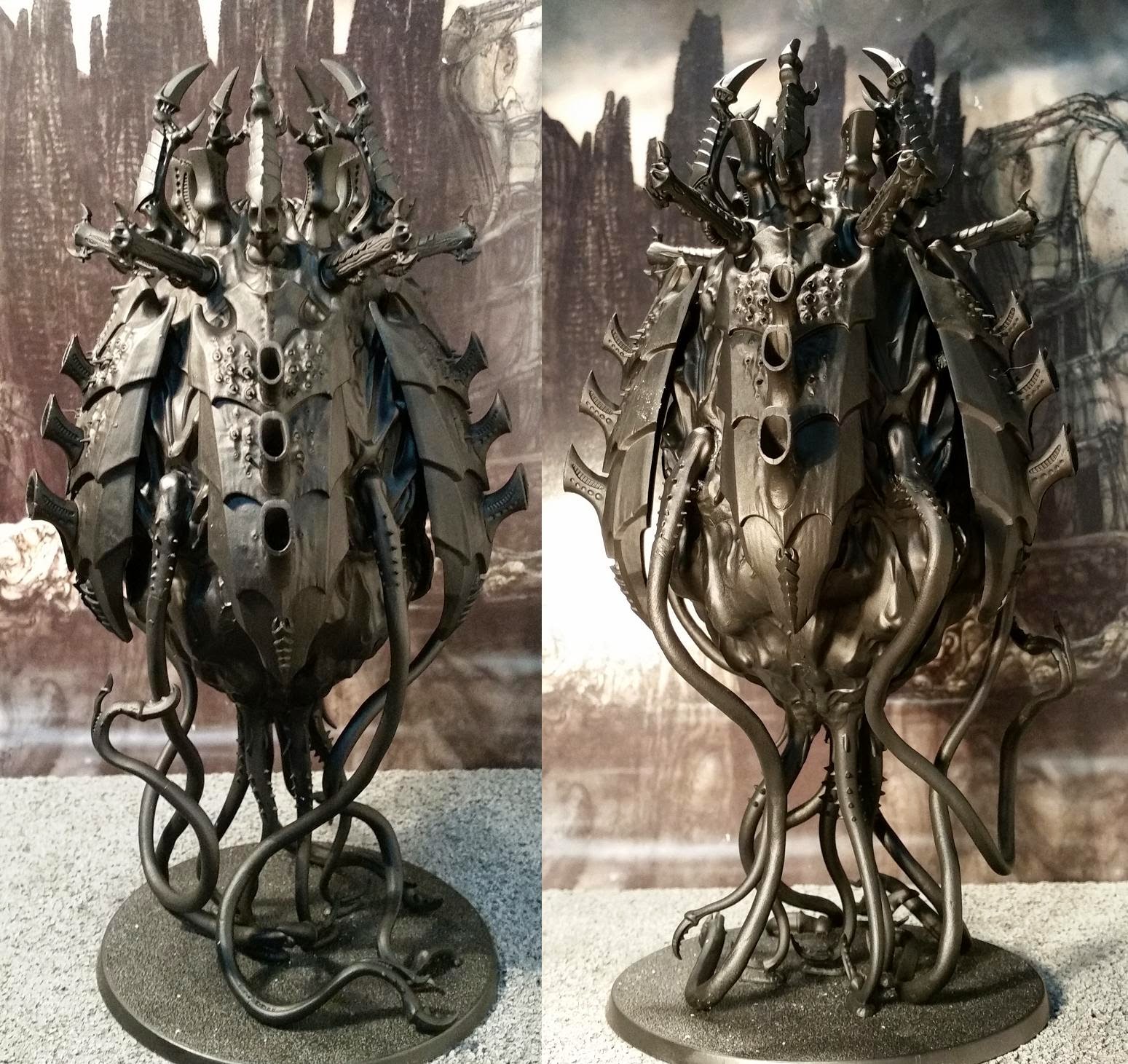 The rules for Tyrannocytes are unclear, which will add to the fun.  Ironically, White Dwarf issue 41 states that, "when it comes to using them in the game, it couldn't be easier". This is further proof, if any were needed, that GW is a modeling company first and foremost with the game more or less tacked on as a secondary consideration.  Consequently, no one is absolutely sure whether you can only fire one of the ring of guns adorning the crown of the alien drop pod (as for vehicle firing arcs) or all five of them (as for monstrous creatures) at a distant target.  Or somewhere in between.  Ah well, it gives me an excuse to rage quit if I'm tired and don't think I can win a game. 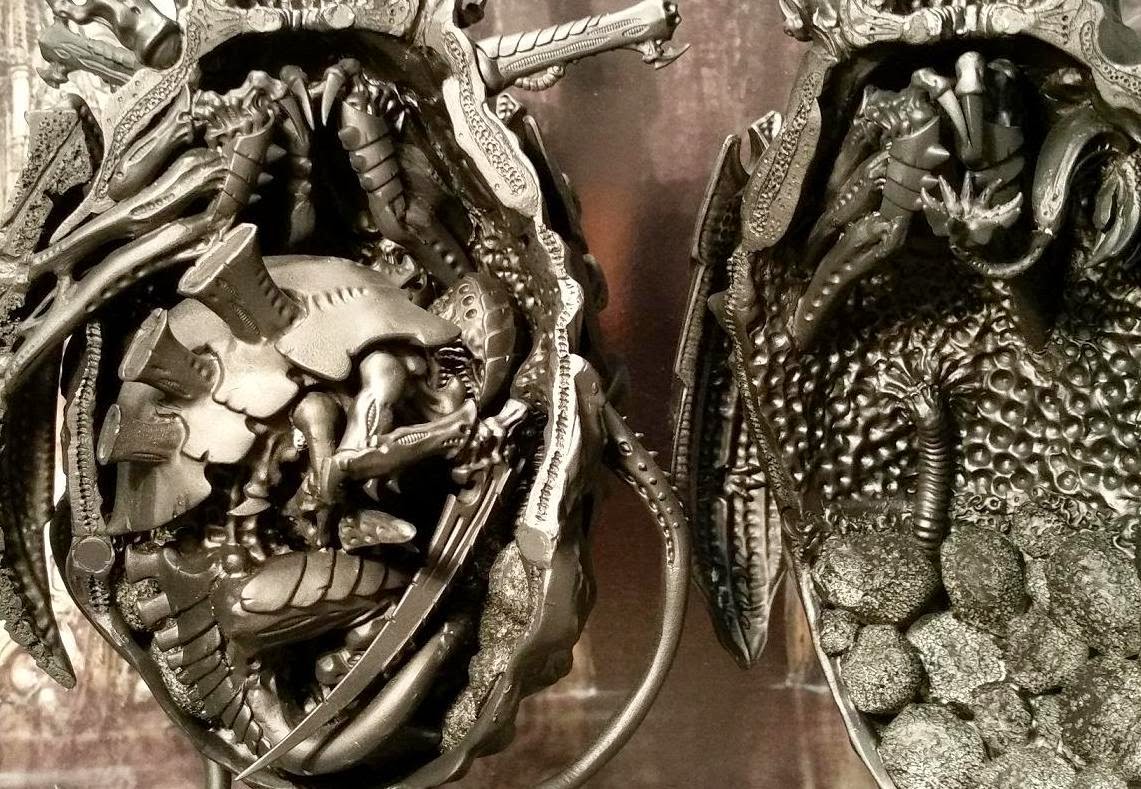 Of course, I'm far too non-confrontational to do that.  Basically, I don't really care and just want to strut my stuff in a competitive setting and blow shit up (even if it is my own army).   Ah, but I'm getting ahead of myself.  I have two sizeable pods to paint first and must decorate the inside of one of them as well a completely superfluous Carnifex.