Following on from my previous post about the interesting effects of Chaos Black Primer, I've finally found the motivation to start making Tyranid terrain.  Its a slow process but a welcome change from painting models.  I had already built 3 pieces of terrain from various bits of GW's Manufactorum and Basilica Administratum kits.  They are pretty boring though and I never felt the urge to paint them.  Then I saw a post on the Tyranid Hive where someone had created a marvelously alien effect, mainly using a hot glue gun.  I reminded me of the Martian Red Weed from H.G. Wells' War of the Worlds and was so good it inspired me to create a bit of Tyranid infestation of my own.


I started by gluing pieces of Extruded Polystyrene Insulation Foam Board onto random bits of the ruin, being careful to ensure that the exposed surfaces were freshly cut.  The exterior of the board seems to have a coating which protects it and stops it from disintegrating, which is the effect I'm going for. 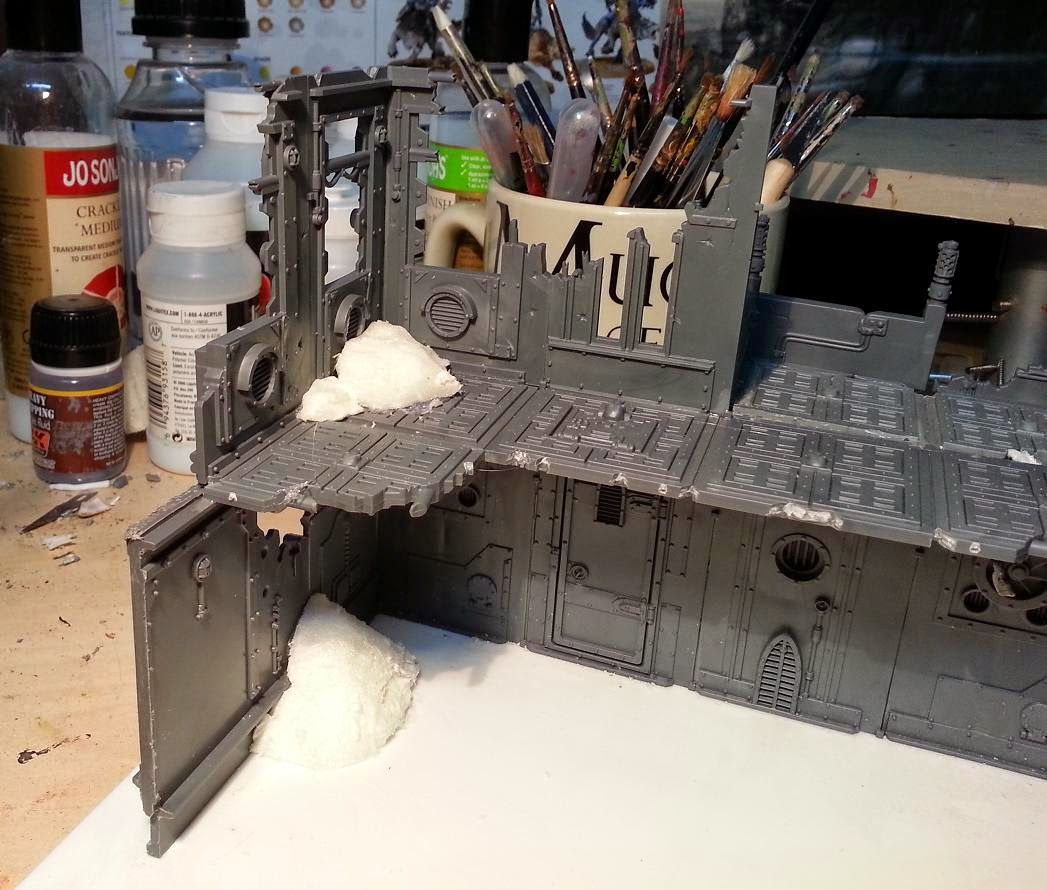 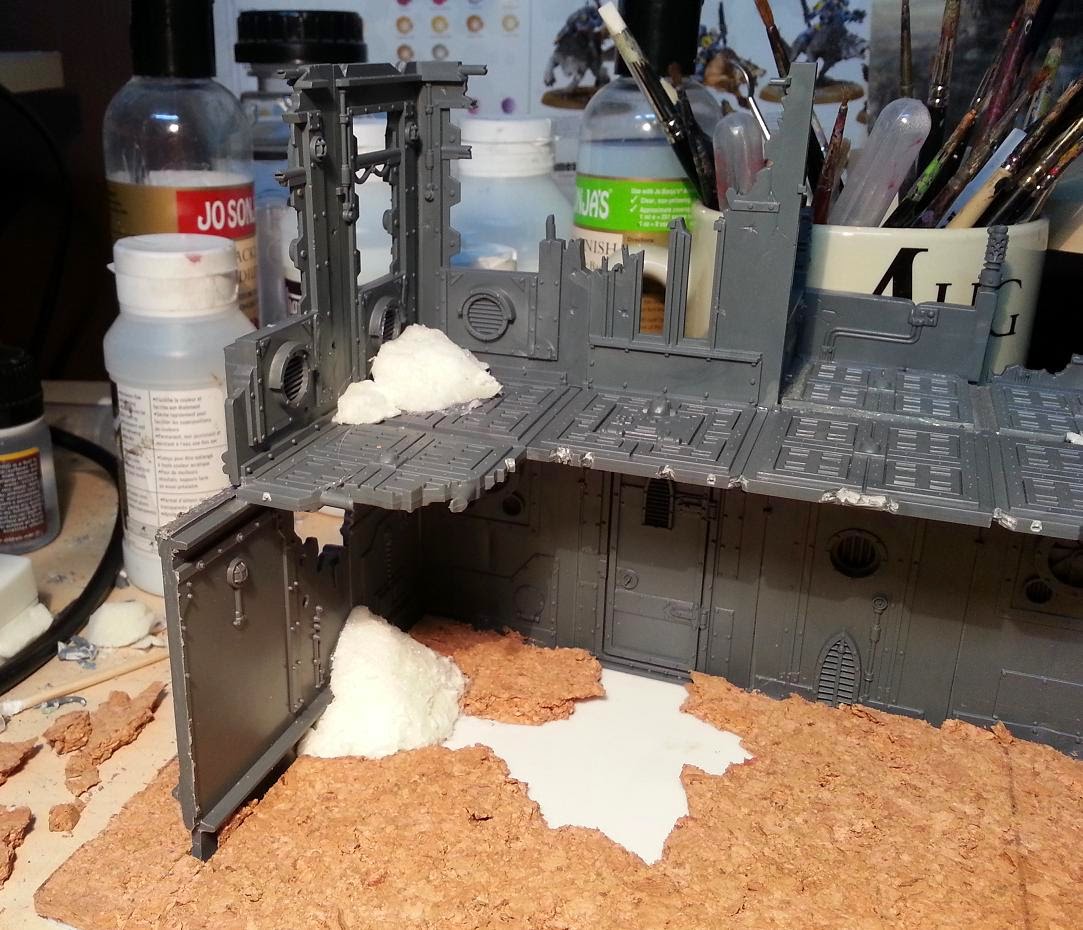 I then added tendrils 'growing' out of the foam with a hot glue gun.  This was a bit tricky and time consuming; its difficult to get the glue to taper into a point.  I found that if I just slowly stretched a strand of glue, letting it cool in the air for a while before sticking it to the terrain, it worked well. 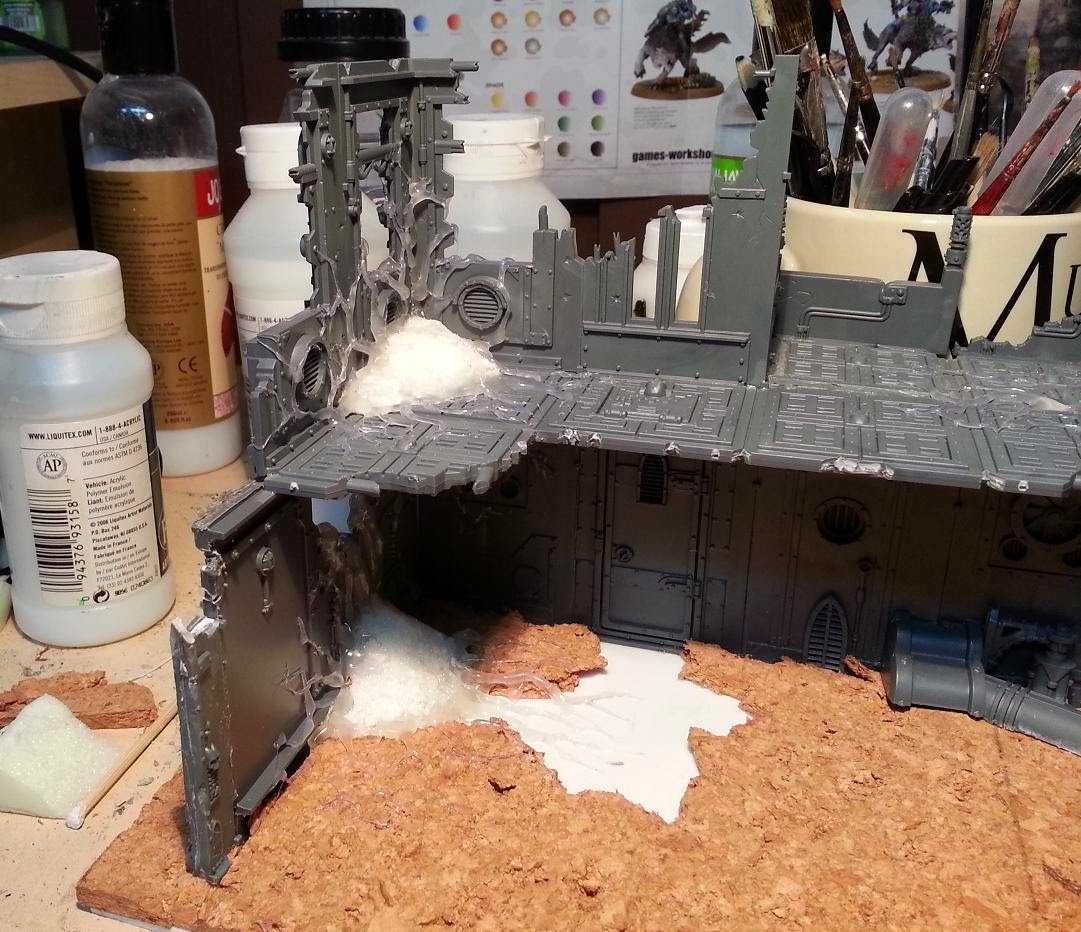 Next, I added some grit/sand and the model was primed with Citadel Chaos Black.  This has the added bonus of melting the foam, creating a sponge like effect.  I'll basecoat the exposed foam with a deep red or maroon acrylic so that it is covered but doesn't melt anymore. 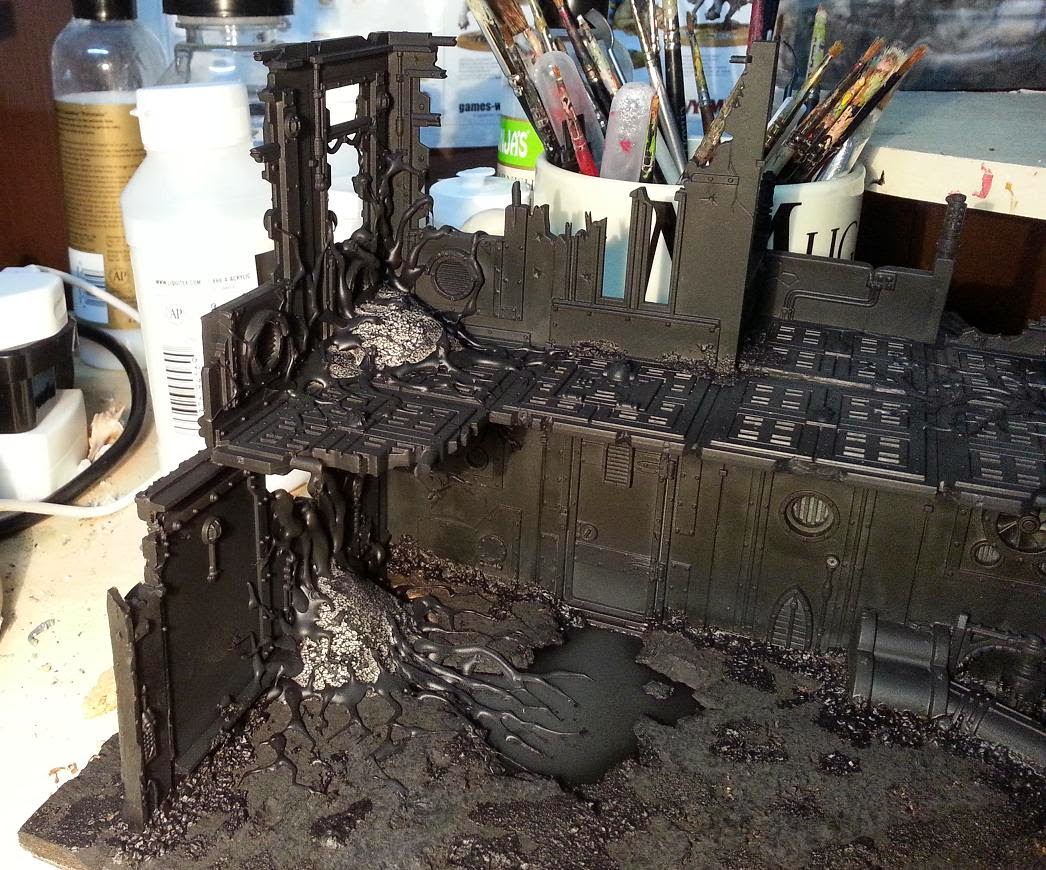 I've got to make the other two pieces yet and then start painting.  It should be an interesting challenge.
Posted by Monkeychuka at 23:49 No comments:

Styrene mutation continues with my latest Crone.  All you need to create this beast is packet of green stuff and more money than sense.  Eye of Mawloc and thorax of 'Fex.  Wing of Terrorgheist and tail of Trygon.  Throw in some Tyrant arms and a pinch of devourers and already you're hoping to God that your wife doesn't find the receipts. 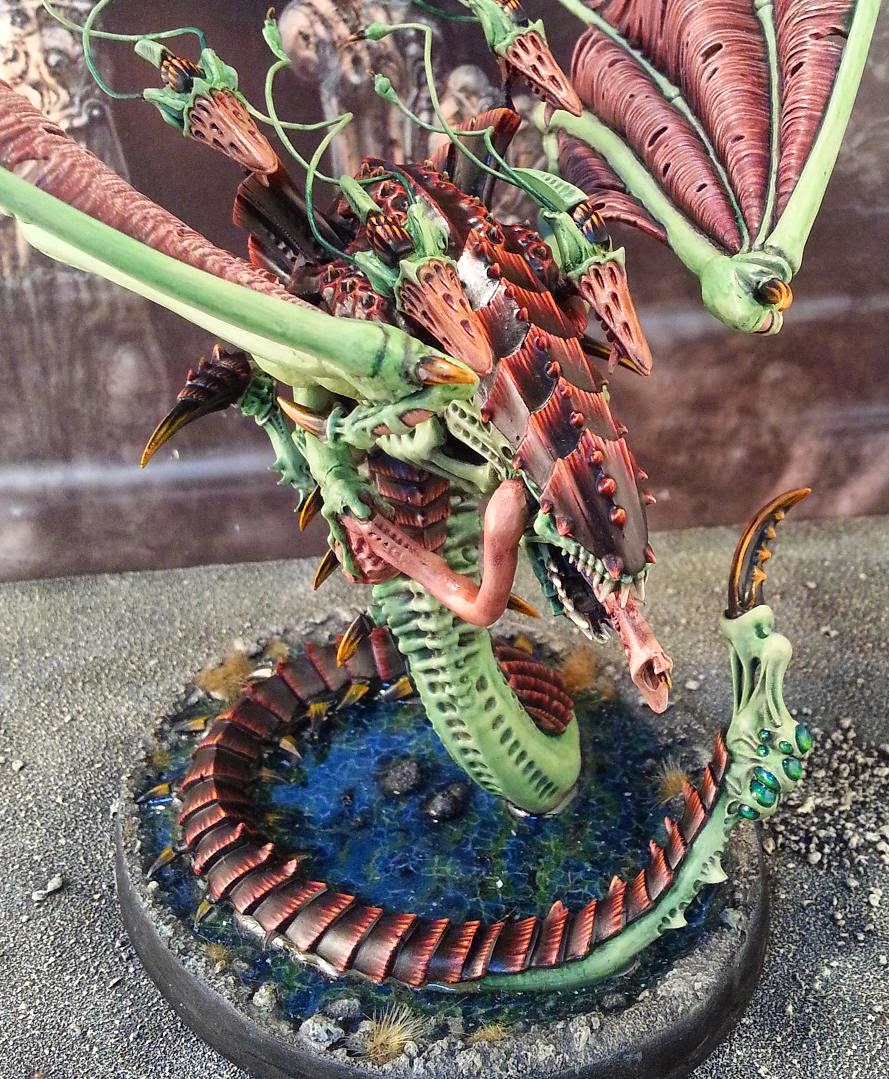 Actually, this version didn't cost me anything but the original Harpy was built in 5th Edition when there weren't a lot of monstrous creature wings knocking about.  I knew of other people daft enough to attempt a Harpy conversion before the official kit came out and they were generally using Balrog or dragon wings from LotR/WFB.  I decided to use a Zombie Dragon and that was where things started to go wrong. 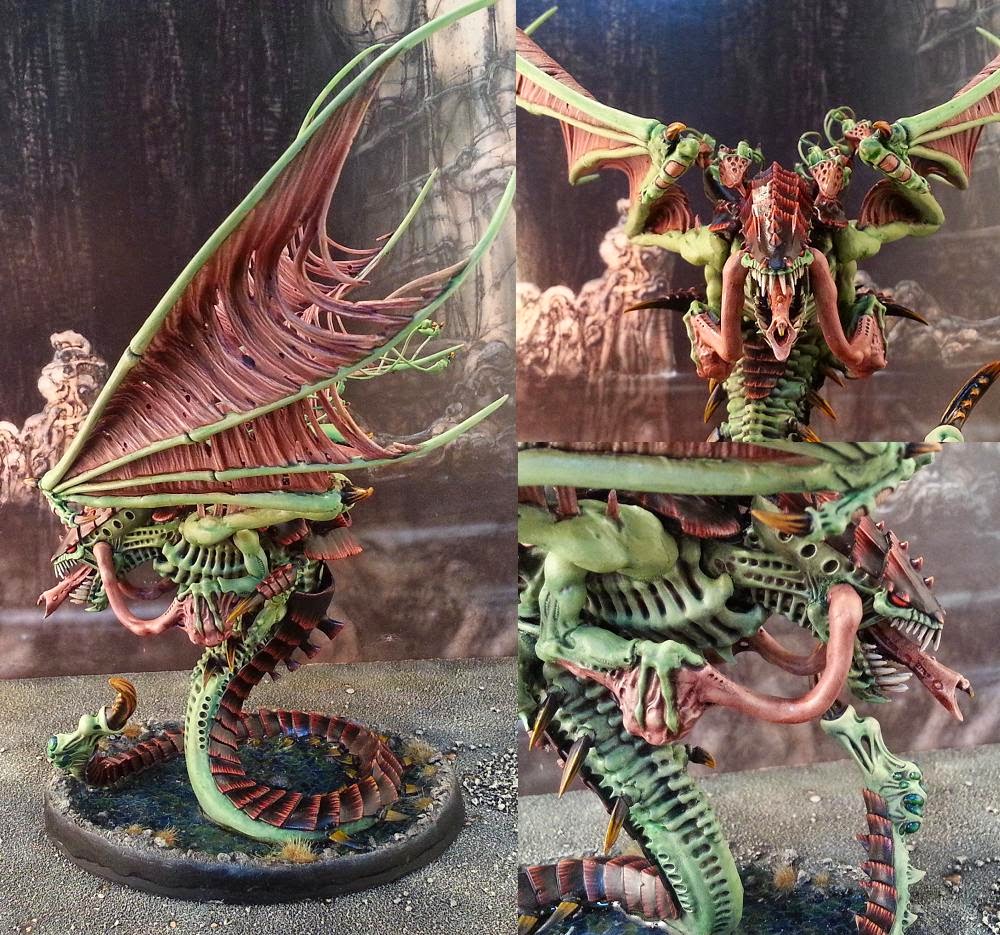 I couldn't get the damn wings to stay on the body with magnets and had to use 3 sets in the end.  The water effects were a wash out (pun intended), took multiple attempts and one ruined Trygon tail.  I broke one of the wings in half trying to make it curve upwards.  I couldn't get both wings to mirror each other and positioned them too low (I've managed to improve that somewhat but they still aren't symmetrical).  I snapped the end off a wing again whilst painting it.  I painted the spikes the wrong way round.  The grass effects wouldn't stick (even with super glue) and kept falling off. 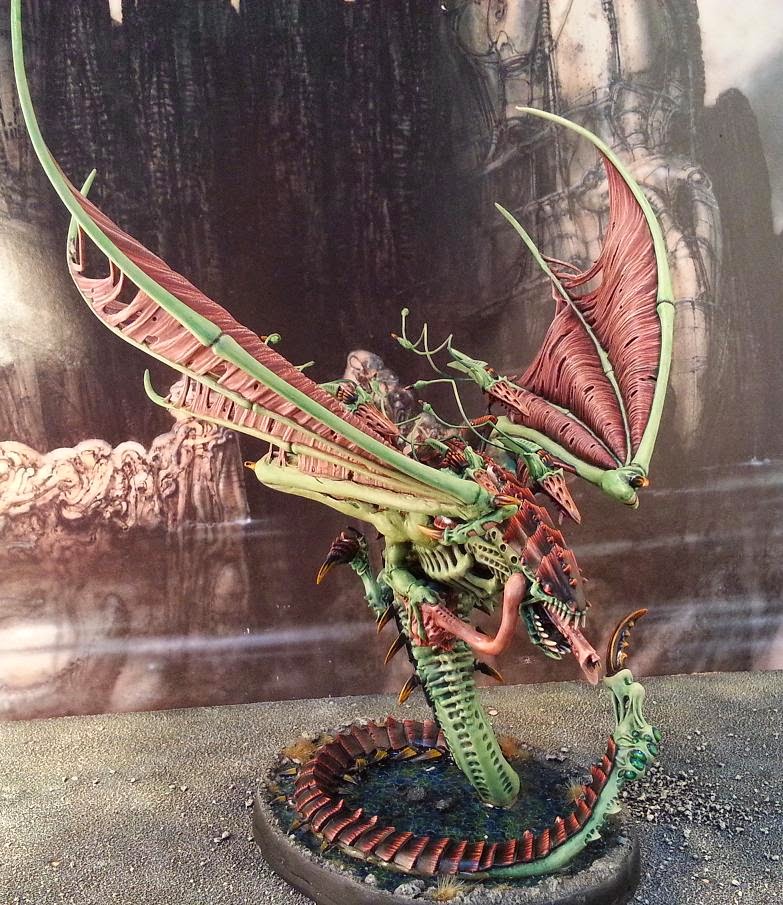 The Harpy itself turned out to be utterly useless in competitive play.  It even managed to drop spore mines and scatter them onto itself in one game.  Harpies could only move 12" in 5th Ed and it was rather difficult to avoid it's own droppings. 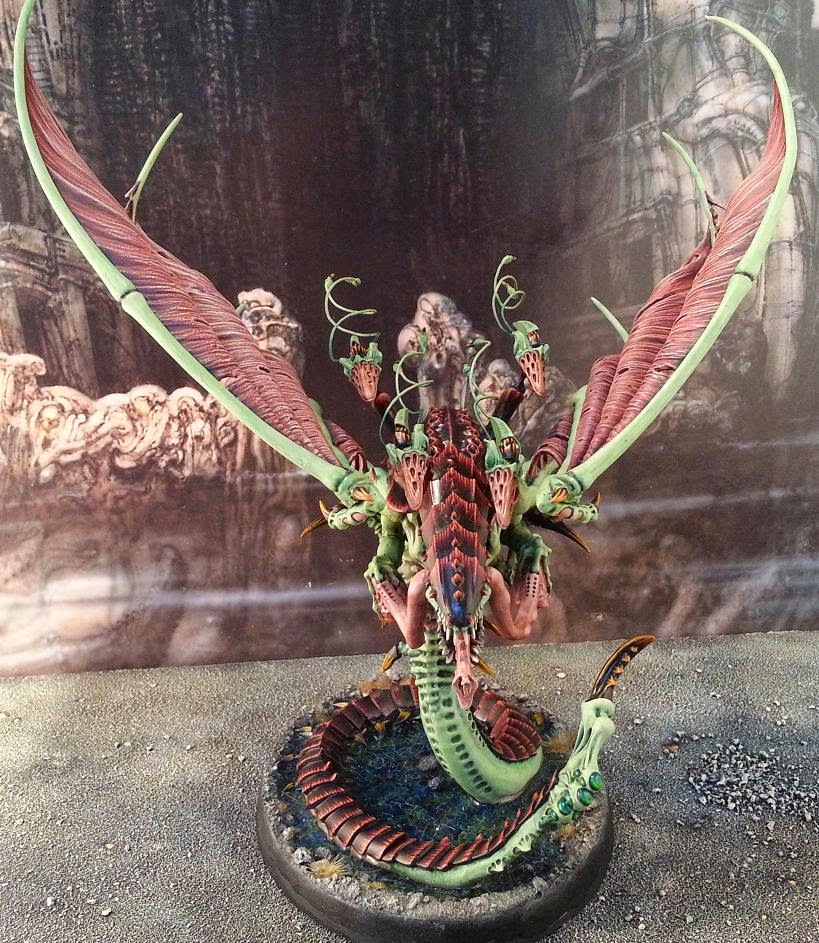 I gave up in the end and threw it in a box marked 'In the event of Fail, please open'.  But then the new codex came out and Harpies got better.  I dusted off the box.  Trouble is, Crones are better than Harpies imho (or they were before 7th Ed) so it was back to the chopping board.  A new set of arms, drool cannon and 4 testiclids later and its good to go. 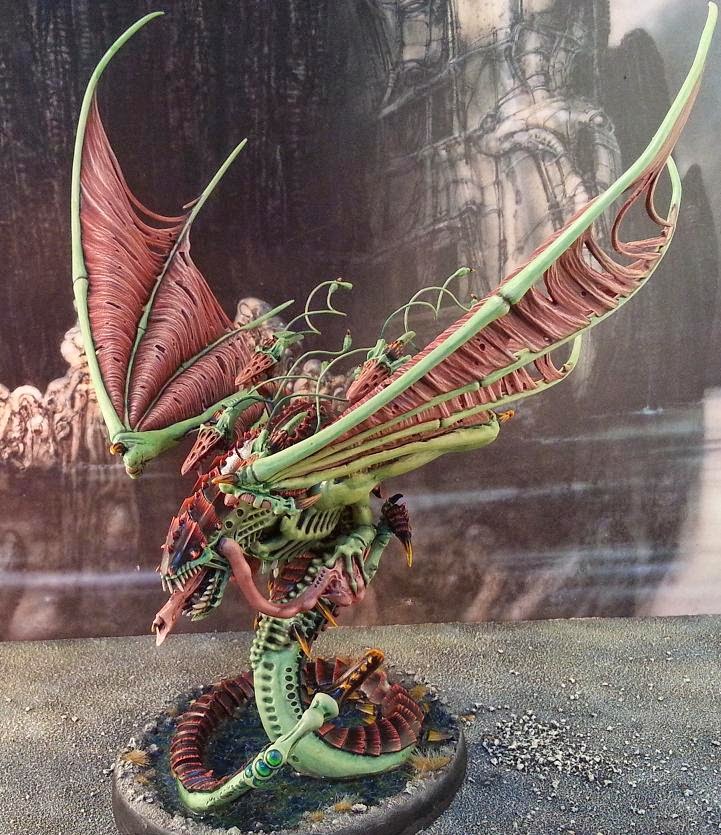 I've been playing it 'counts as' Crone since January and it has done wondrous things so I know I won't have to put it back in the Fail box. 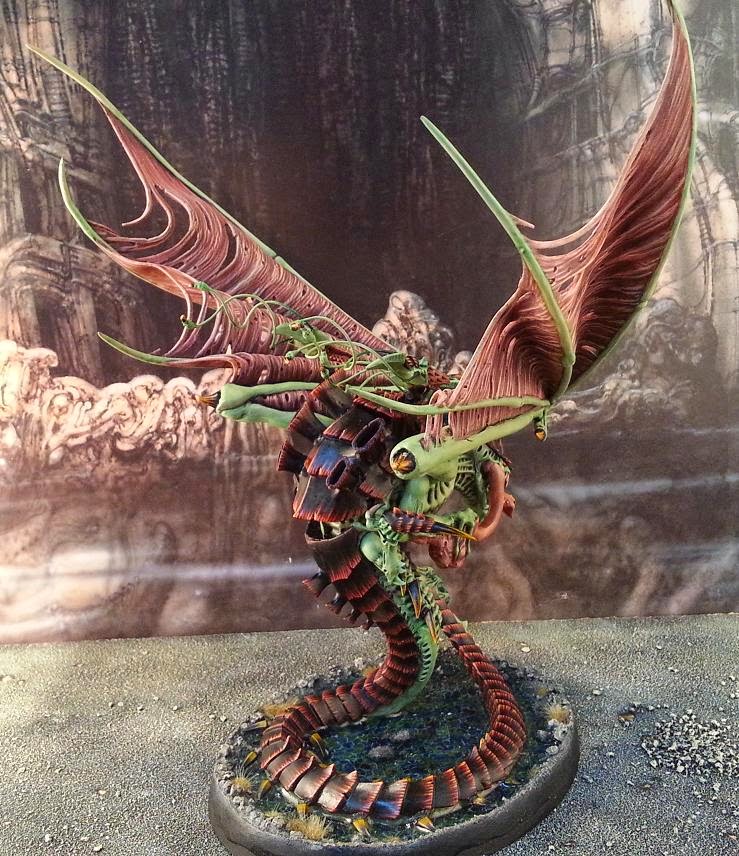 Posted by Monkeychuka at 00:57 No comments: 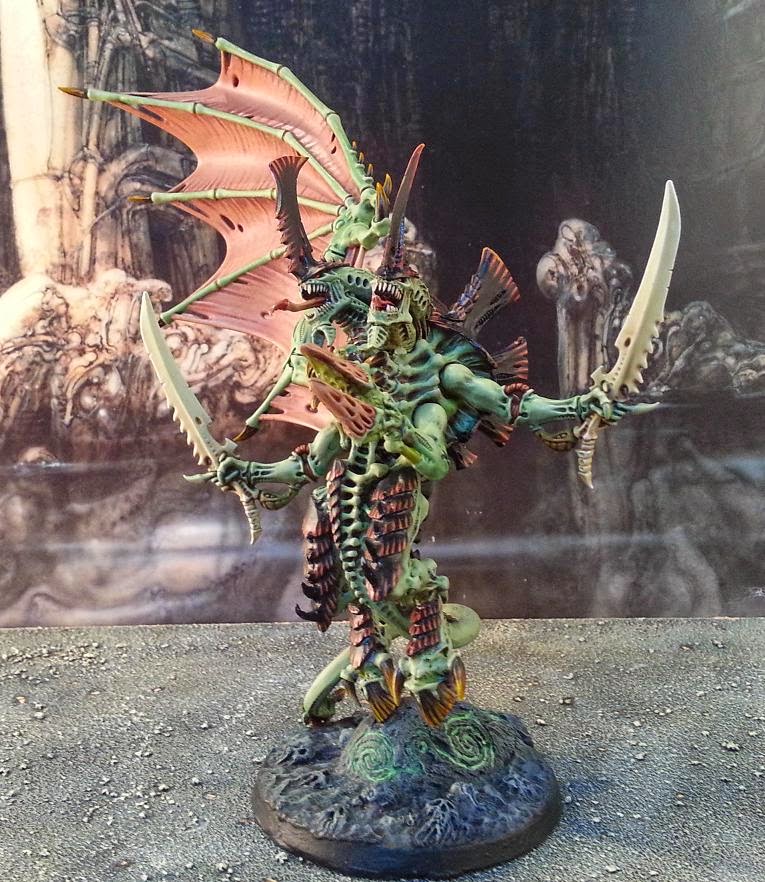 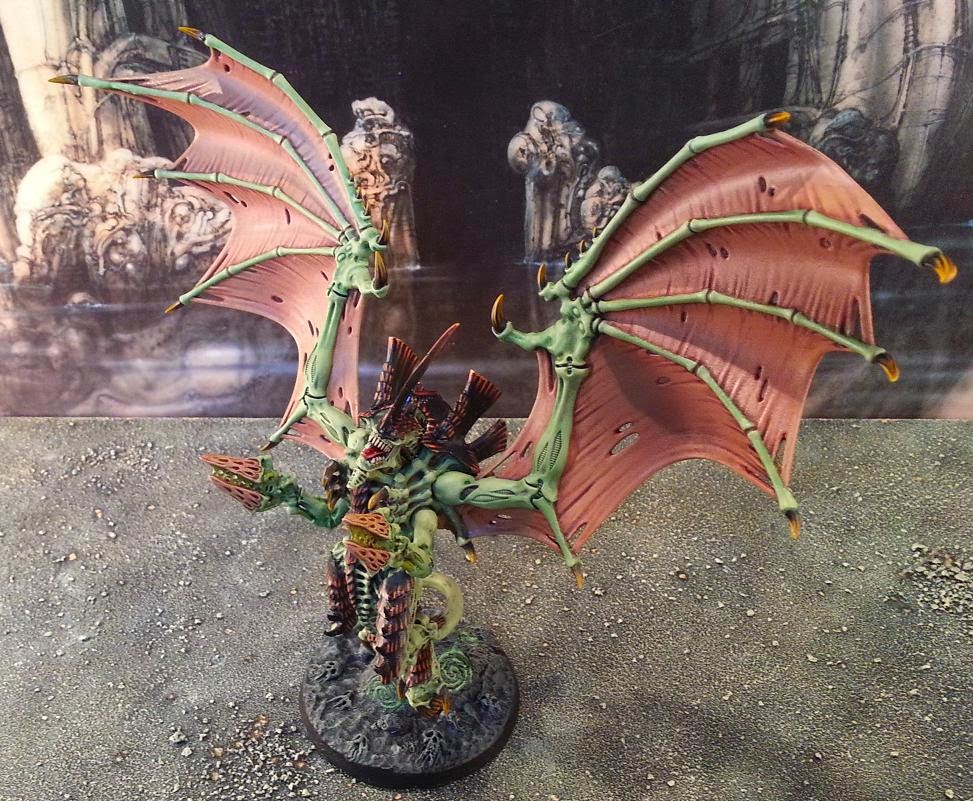 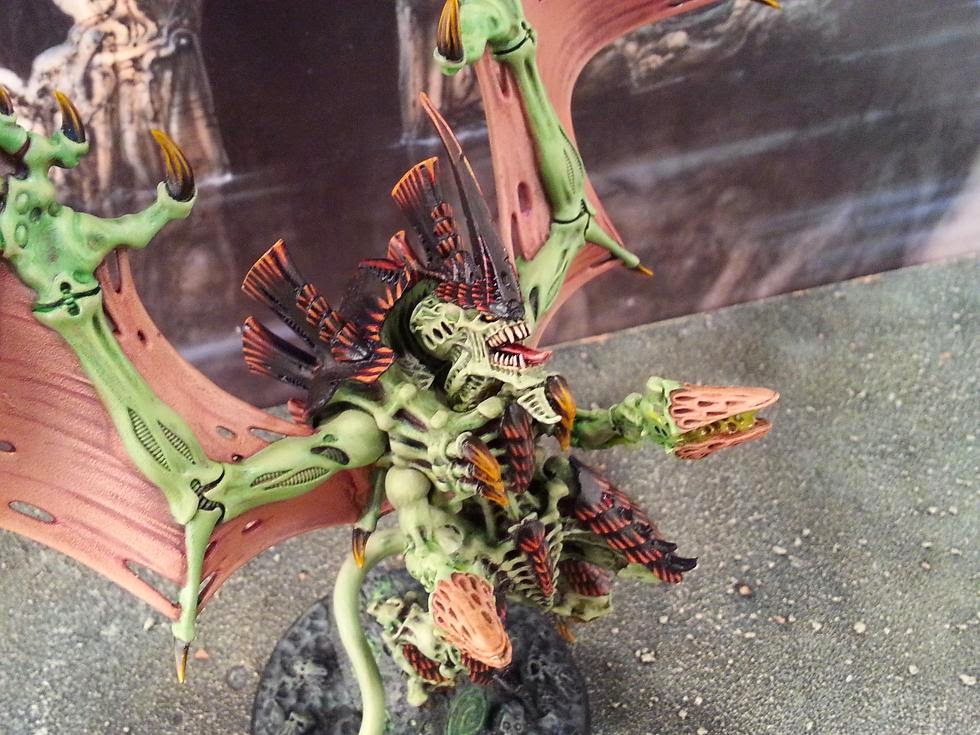 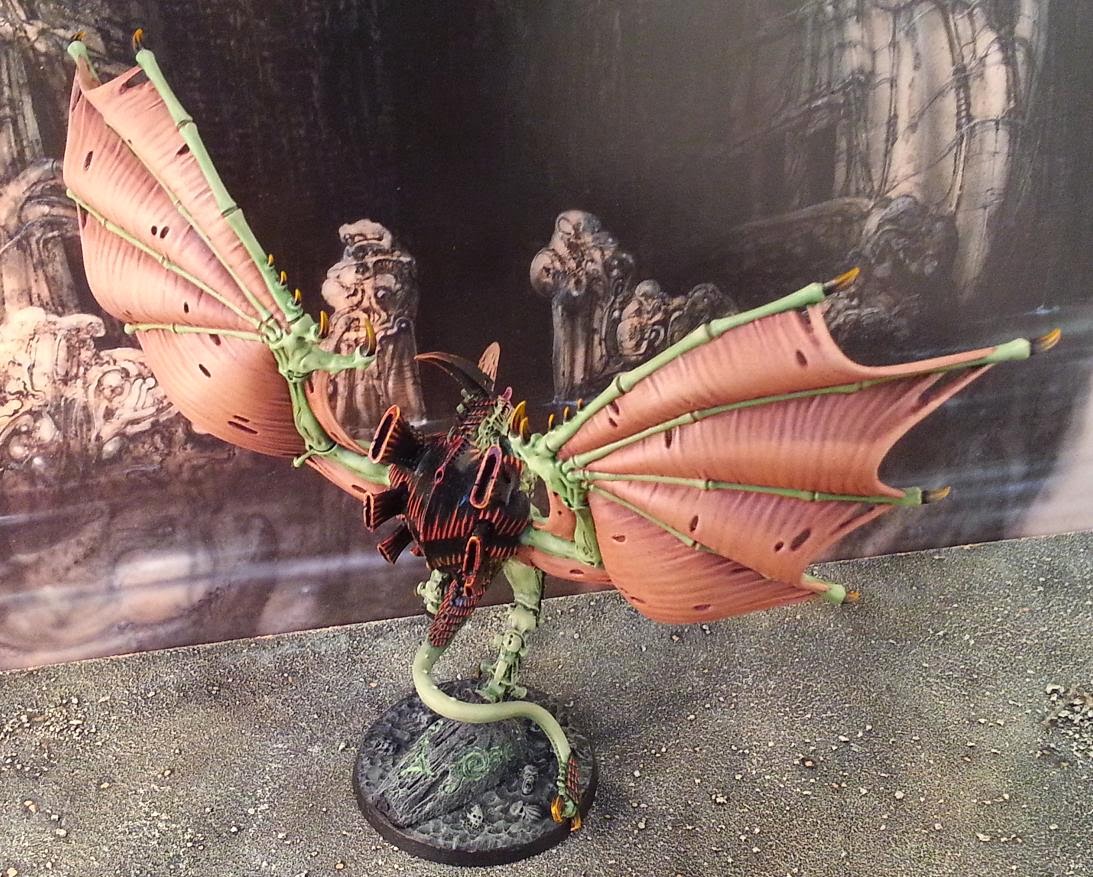 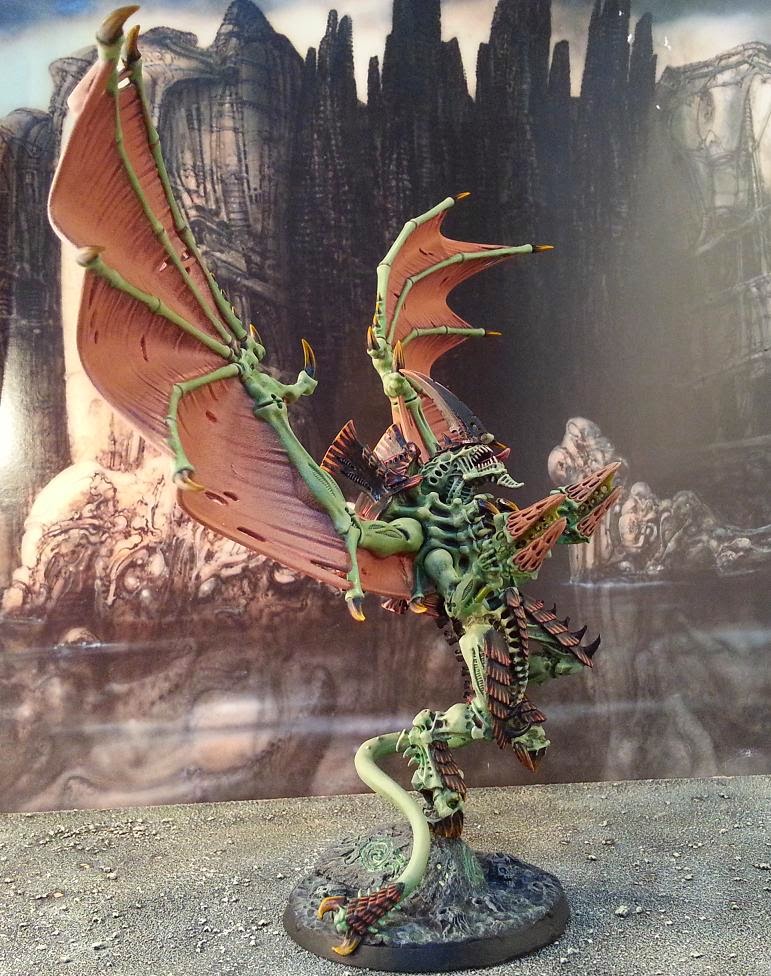