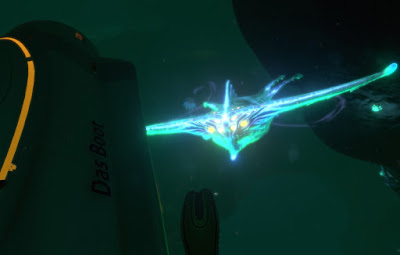 Interesting times ahead.  My newfound status as an ageing, single male coupled with a career change back to contracting which didn't pay me for two months appeared to have killed all creative impulses.  I am definitely out of my comfort zone.  Thank The Lord for video games.

I belatedly discovered Subnautica, which swallowed me whole for the entire holiday period.  I more or less forgot to eat, sleep and wash (it is possible to survive on banana smoothies). If I could have swapped my computer chair for a commode, I would have done so.  Fortunately, the kids spent xmas with their mother.


I spent most of my time building ridiculously impractical sea bases and playing chicken with leviathans.  But that was just scratching the surface and I had to go deeper.  If anyone tells you that Subnautica is an underwater survival game, they're wrong.  That's like saying The Hobbit is a crime caper or a heist story.  Its much more than that.  Its a journey.  Or maybe it was just an interesting diversion which helped me through an unsettling period in my life.  Either way, I clocked over a hundred and fifty hours, so you can't argue about value for money.


Sadly, real life started to get in the way of my underwater adventures.  This was a good thing really and the return to reality reminded me that I was going to build a Dark Mechanicum army.  I wanted to buy Anacharis Scoria but he might be a bit out of my price range now.  So, instead I wasted even more money by trying to cobble together a Witch Aelf, a Wraith and four Sicarian Ruststalkers.  On the plus side, I didn't have to buy any new kits. 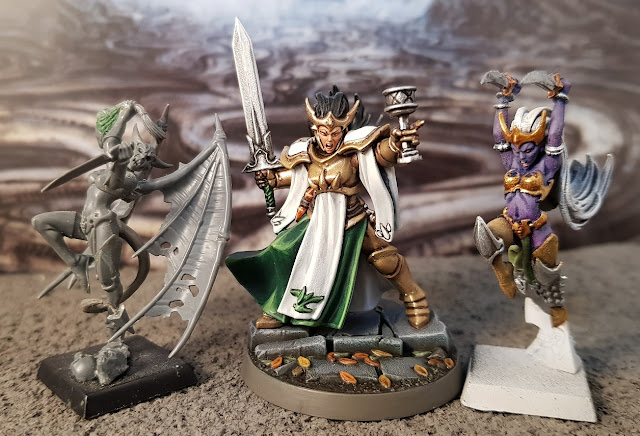 But I didn't really want to build an army.  Seeing them all lined up on the box art was a bit of a put off.  They reminded me of something out of a beauty pageant.  The swimwear section of Miss World 1968 Barbarella edition.  Whilst the paint jobs are good, it reinforced the doll-like qualities for me.  An uncomfortable feeling.  There is a very fine line between playing toy soldiers and actually playing with Barbie dolls it seems.


I wanted something a bit more melodramatic, so I built a 'Mecha-Drider'.  Suitably dark and mechanical or so I thought.  However, it looked more 'Techno-Beetle' than Mecha-Drider.  I was pretty much done with it at this point and about to submerse myself in Subnautica again when I saw this superb piece of art by Victor Guerra 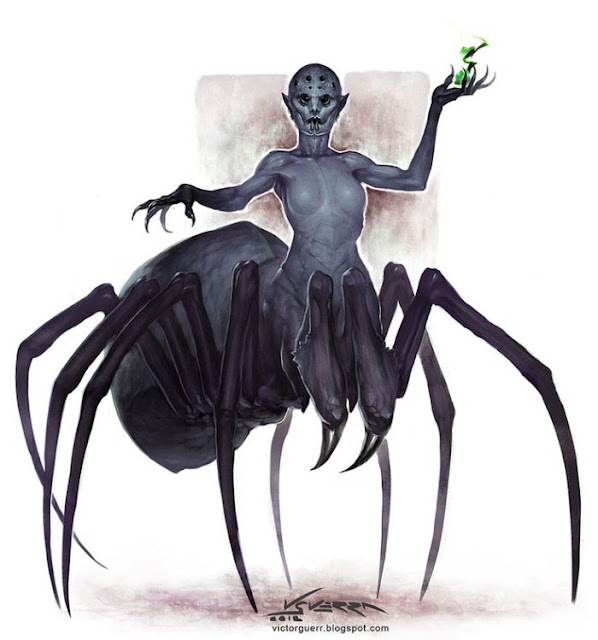 That's more like it! This picture really inspired me. Its so... androgynous.  Except for the shapely but nipple-less breasts, the creature could almost be a male.  Strangely it's the spider that is feminine for me.  The way the torso fits the thorax and has the flared lines of a woman's hips.  The choice of hairless, tapering spider.  A Black Widow?  The shape of the legs look like a sort of wire frame for an 18th Century ballroom dress.  Definitely female, but very odd and intriguing. 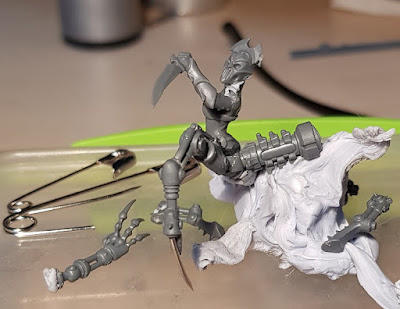 I attempted to capture the look and feel of the beast.  But the legs were too short and stubby.  And there weren't enough of them.  I had enough Sicarians to add an extra pair but in Victor's picture the spider appears to have ten legs.  Surely that was wrong?  A quick check on Google revealed that the front ones are actually 'pedipalps'.  Who knew?  I thought pedipalps were something they gave to old people for incontinence.  Anyway, I decided not to add a fifth pair and figured that her arms would make up the numbers and perform the same function as pedipalps.  Four pairs of legs looked even stubbier than three though.  I needed to make them look more tapered and rummaged around in my bits box for ages, to no avail.  There was nothing delicate but strong enough in there to support the body.  I needed something thin, but strong.  The answer was, of course, safety pins.

I've still got a ways to go with this conversion but I'm slowly getting back into it.  I think.