Brother Halar gets a makeover 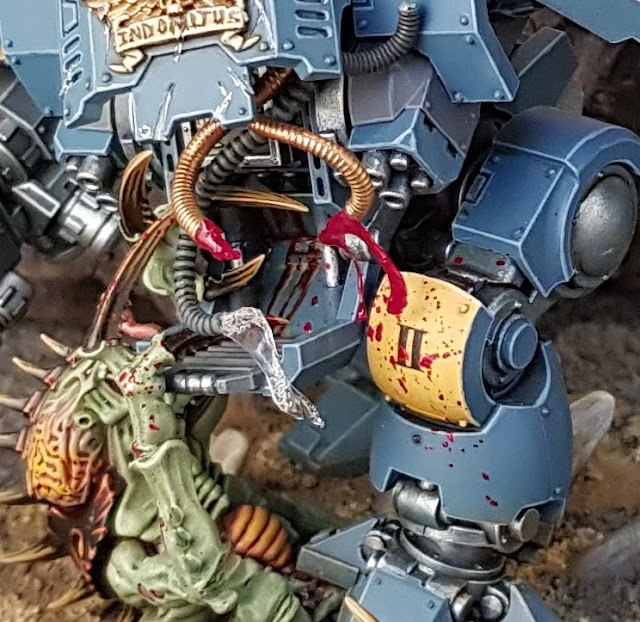 Blood for the Blood God. 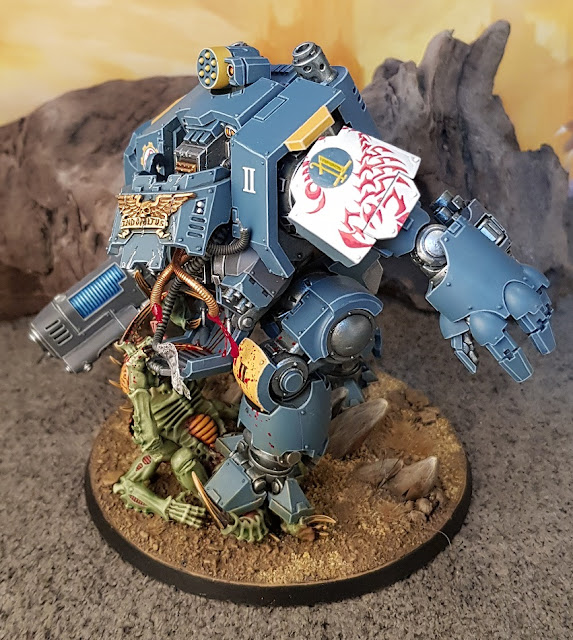 Skulls for the Skull Throne. 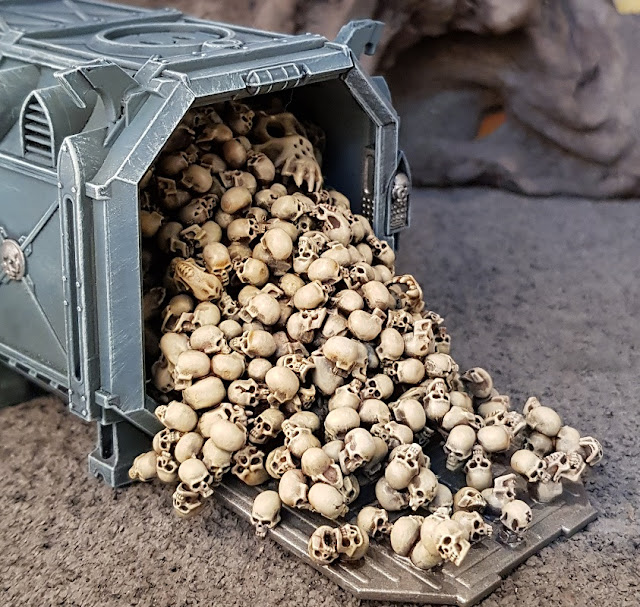 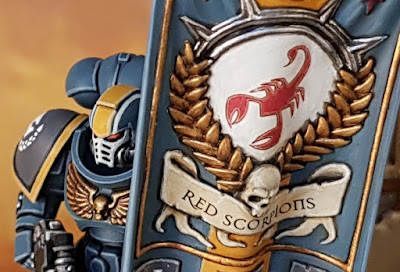 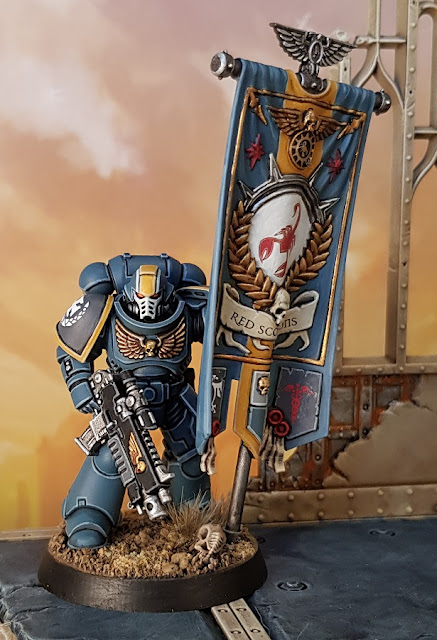 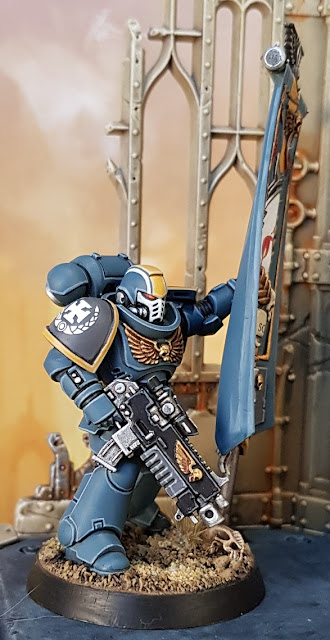 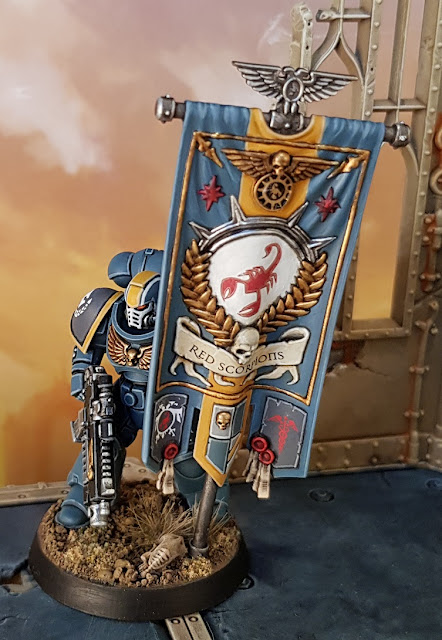 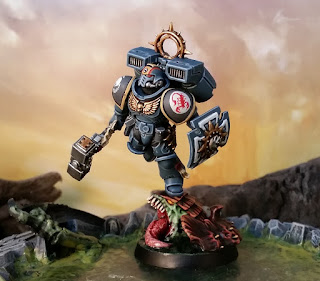 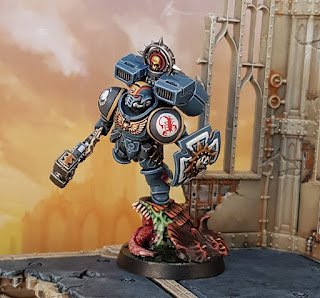 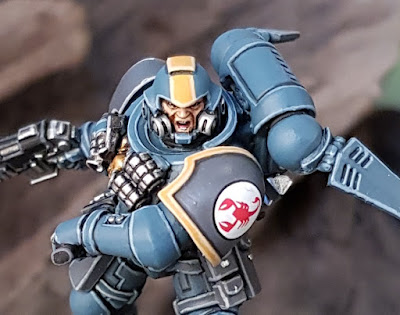 Scouts are finally done! Man, that was a ball-acher.  I like the models so much that I couldn't allow myself to rush or cut corners so it was driving me nuts towards the end.  However, all's well that ends well and 10 scouts are now ready for patrol.  Of course I've named them.  I was bored with names from the Aliens franchise and decided to use monikers from one of my other favourite films.  From left to right they are O'Neill, Bunny, Barnes, Elias & King.

I finished the 1st Squad second and did the 2nd squad first.  This is why I never win games of 40k.  I am numerically dyslexic (Not really, but apparently its a real condition called Dyscalculia.  "As thick as two short planks" was the medical term floating around in 1970's Manchester however). 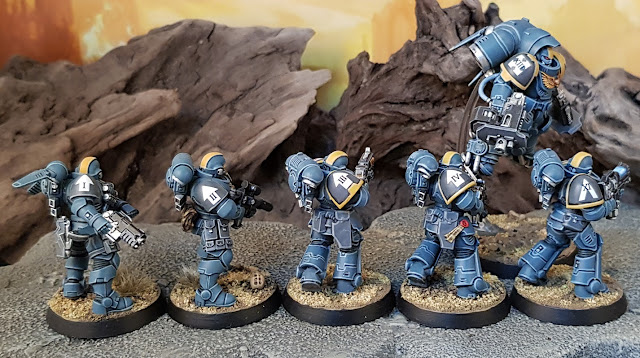 I now have 6 squads in my army list. 1 & 2 are Scouts, 3 & 4 are Intercessors, 11 is Hellblasters and the Inceptors are squad 13.  I have no idea if this conforms to Adeptus Astartes military structure and frankly I don't care.  Games Workshop's retcon of their lore to introduce Primaris marines was about as subtle as a brick so I think we're all just pretty much making it up as we go along at this point.

Personally I would have released the Primaris figures as updated Space Marines without fanfare.  I've been running out-of-print Necron Wraiths in games alongside the newer versions for years and nobody gives a shit.  Why not just allow you to use your old OR new marines interchangeably?  What a crazy idea!  But then I don't work in marketing and try not to board the hype-train wherever possible (with varying degrees of success).  You've got to admit that 8th edition 40k generated a lot of attention in the wargaming world which undoubtedly led to increased sales.


A full shot of all 10 Scouts is in order.  These are my favourite marines ever.  Which means that they will last about 30 seconds in a tournament game.  It doesn't help that Astartes neophytes are as squishy as burst haemorrhoids and even a few Ripper bases are terrifying to them.

I am now worryingly close to my deadline for the Fields of Blood tournament.  Technically I only have to paint a lascannon and the Primaris Ancient and I'm done.  Oh, I should probably get the Apothecary to attend to Captain Precarius at some point.  However, I've been dicking around with scenery again and would like to get this finished too.  As Rolf Harris used to say, "Can you guess what it is yet?" 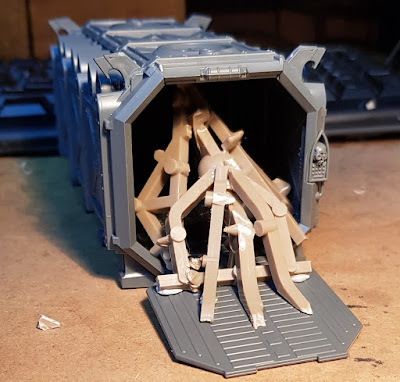 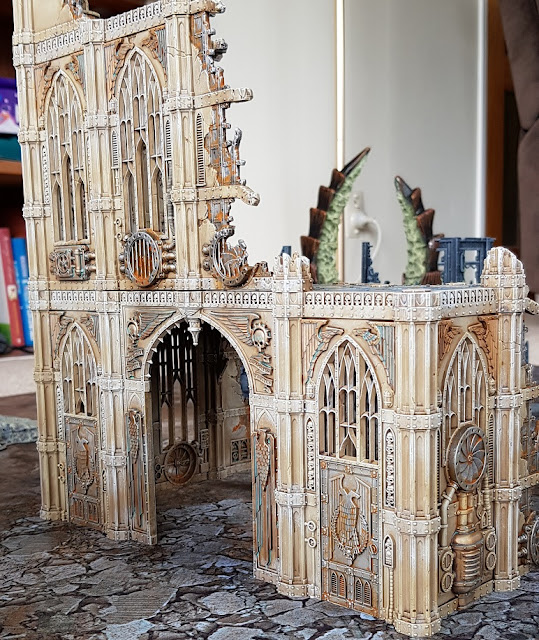 Ok, it took an extra day but I finished it.  The lighting in the garage is terrible so I set up in the living room to see what it looked like really. 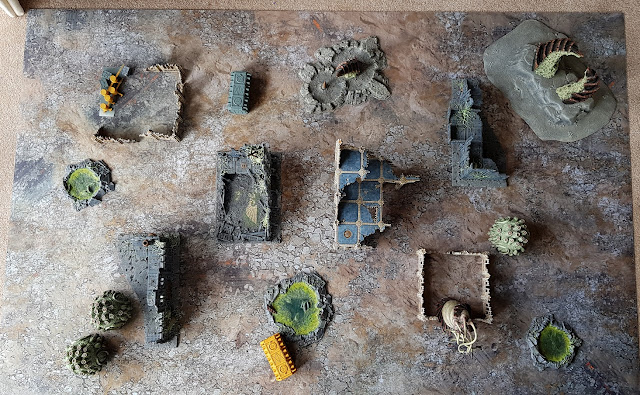 I think I've got enough terrain to safely cover an entire board and I have gratefully retired the Evolution Chamber which I always sort of hated. 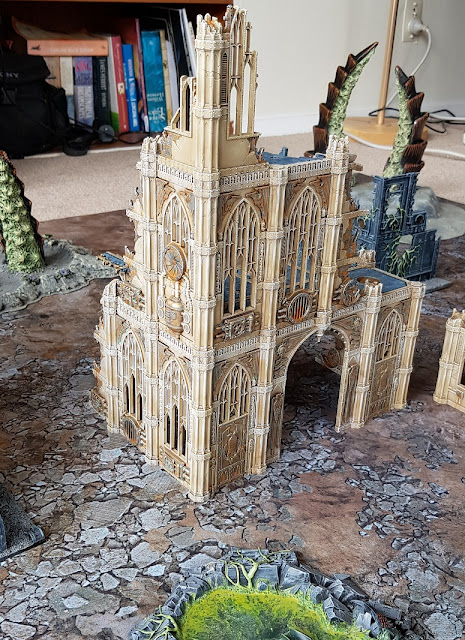 The fixtures and fittings took the longest.  There's a huge amount of detail on the Kill Team terrain, which is great because it almost paints itself.  However, I completely misjudged how much time it would take to weather the brass and iron furnishings. 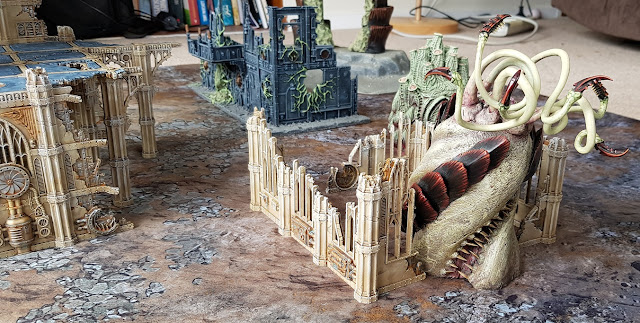 I'm not going to bother basing the ruins because it will take too long (and I want to keep it modular for Kill Team) but this allows me to do interesting interactions with other bits of scenery. 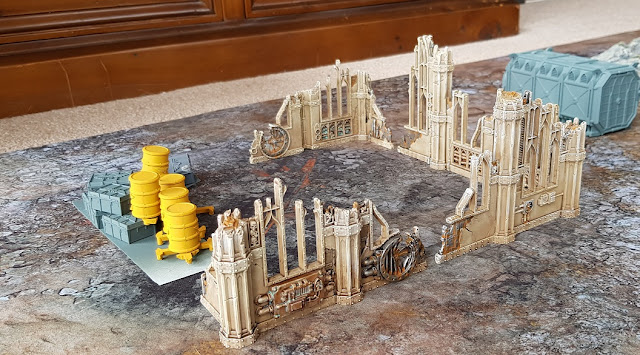 Now I have to finish my Munitorum Armoured Containers kit.  I want to put Red Scorpions heraldry in there to show that its a Nids vs. Space Marines scenario.  Additionally I'm going to use this as my display board at the tournament.  I put about 20 hours into this, I really like it and so I reckon I should use it. 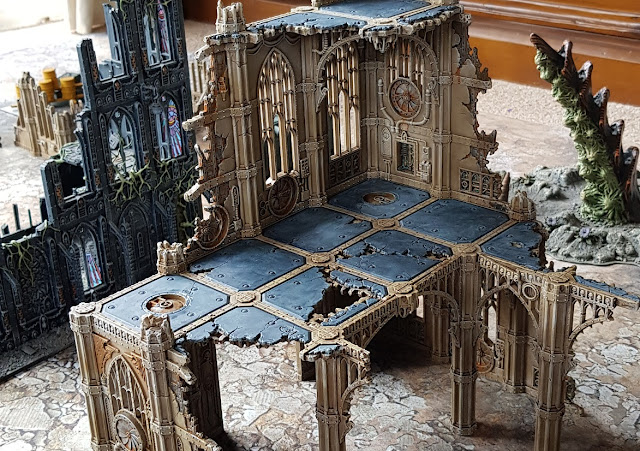 I couldn't quite replicate the darker blues of my original sector mechanicus terrain but its not a glaring mismatch and at some point you've just got to call it done.
Posted by Monkeychuka at 13:34 11 comments: 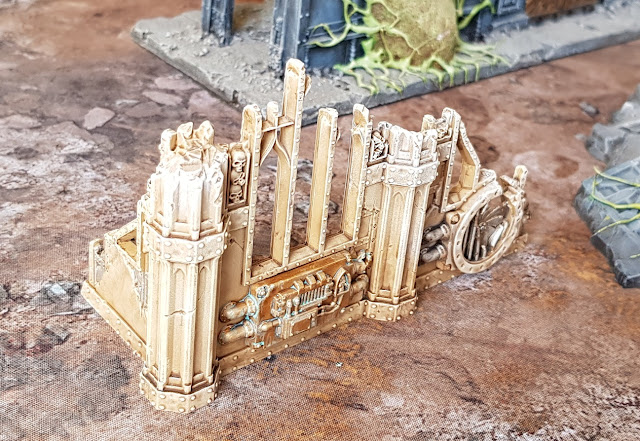 Done no work on the Scouts since Tuesday.  I bought a Deep Cut Studios neoprene mat from Mighty Ape instead.  I paid an extra $20 for the mat bag but I quite like it.  I've been trying to work out an achievable paint scheme to finish the Kill Team terrain in time for the tournament.  I've used one of the small ruins as a test model. 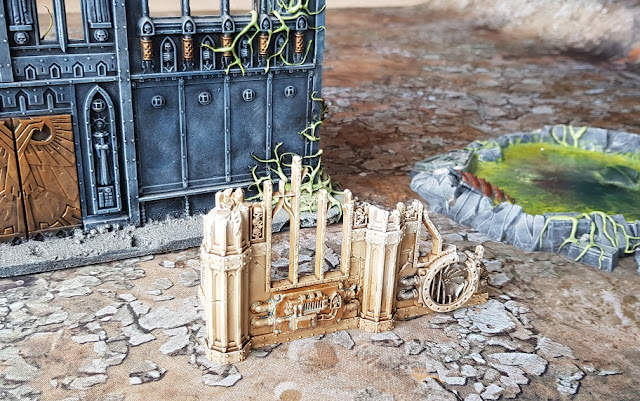 It was primed with a Zandri Dust rattle can.  Dry brushed with Ushabti Bone, Leadbelcher and Sycorax Bronze.  Washed with Agrax Earthshade.  Dry brush highlighted with Ushabti/Ulthuan Grey and Necron Compound.  Bronze wash of Sepia, steel wash of Nuln Oil.  Then I added Nihilakh Oxide and Typhus Corrosion.  I don't like the Typhus Corrosion so I'm going with AK Light Rust to bring in more brown tones. 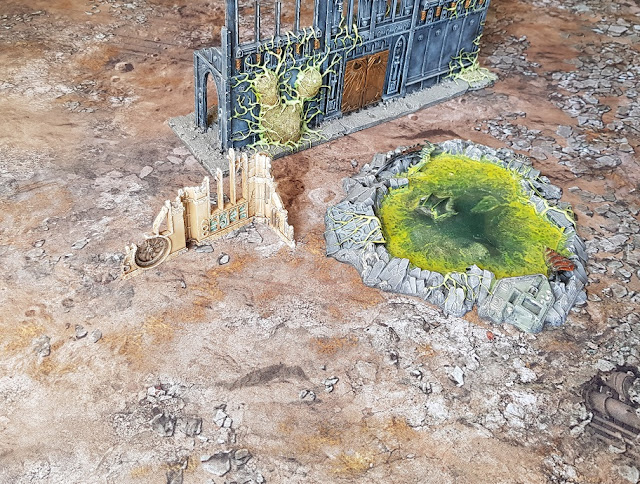 I'm going to do the floor panels in the same colour as my existing Sector Mechanicus terrain (Black, Thunderhawk Blue, Fortress Grey (or Astronomican?  I can't remember!)) to try and marry up the two different types of terrain in an aesthetically pleasing manner. I think its doable.  I'm going to try and finish it this weekend.  This may require me to stay sober, so I promise nothing. 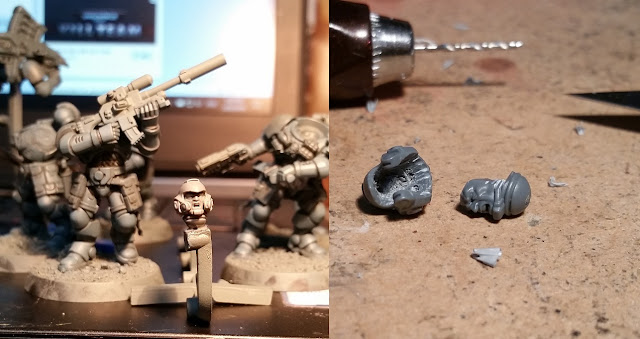 "The best laid schemes o' mice an' men, Gang aft a-gley".  I was on schedule to finish the Scorpions in time for Fields of Blood on the 29th.  But that's all thrown into a cocked hat now.  On Tuesday evening I sat down to edge highlight the second squad of scouts and had a mini nervous breakdown.  My favourite brush (Daler 00 pure red sable) was frozen into a stiff, paint encrusted point because I had forgotten to clean it.  It's basically useless. I managed to get the dried paint off but somehow the magic had gone out of it.  I can't even seem to apply a base-coat cleanly with it now.  My other brushes weren't really up to the task so I threw the brush pot across the garage in a fit of pique.  20 minutes and a large glass of wine later,  I felt a bit better but then I noticed that I had accidentally knocked Captain Precarius off the shelf in my infantile rage and this had happened to him: 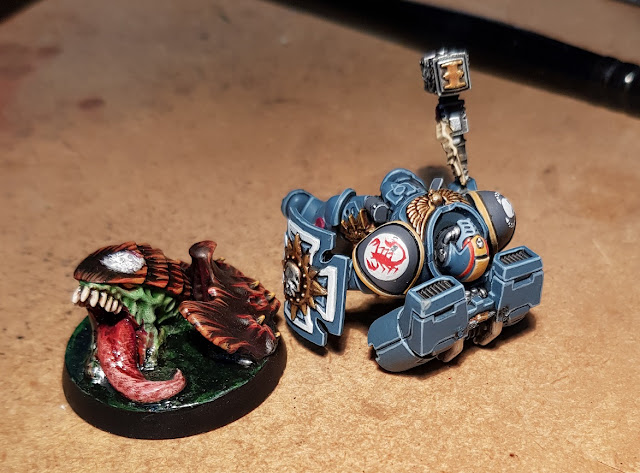 I had a complete tanty at my workstation. Cursing roundly and obscenely, I think I made a few new words up.  Looks like I picked an apt name for my captain and I still haven't found his Iron Halo.  The 40k fairies have apparently taken it.  I definitely wasn't in the mood to patiently add pencil-thin lines all over a bunch of models at this point. 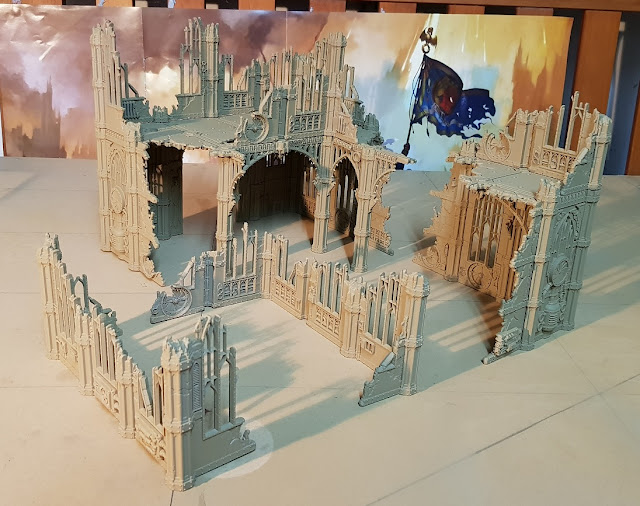 A much needed break from Adeptus Astartes was required.  So I opened the Kill Team starter set which was an impulse buy from 2 weeks ago and all my happy thoughts flooded back in.  Completely ignoring the models and rules, I spent the next 4 hours building scenery.  Now I want to take it to the tournament.  This is madness.  I already have a completed gaming board with enough terrain to spare and that's what I was planning to take to FoB. 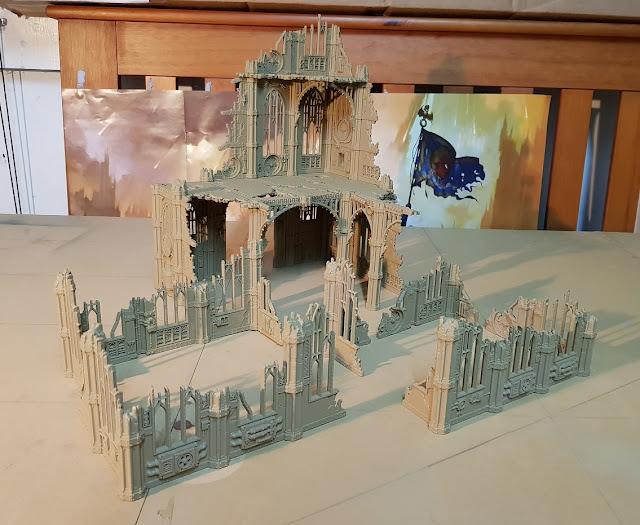 I haven't even played a practice game with my marines so there is no reason whatsoever to add to my hobby workload.  There's just no way I can finish all these extra buildings in time given the speed at which I paint.  On the other hand, I'll probably never get round to painting it without a hard deadline.  Maybe an orgy of dry brushing is just what I need to counteract the painstaking, delicate process of highlighting scouts.  We'll see.  I'm already thinking I need a new neoprene mat to go with it though.  Maybe everything happens for a reason.
Posted by Monkeychuka at 20:52 9 comments: 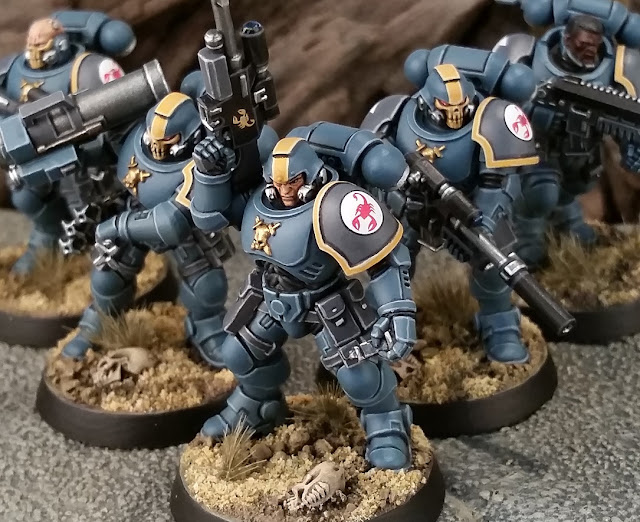 Yes, I'm a sad bastard and I've named them all.  I was going to call the last one Crowe but something about him reminds me of Prodigy's front man.


I've only given one of them a camo cloak (folded up under the backpack) which probably makes them worthless in game as scouts.  I considered green sculpting some cloaks on them all but a) I don't like camo cloaks, b) I spent a stupid amount of time edge highlighting the armour and covering it up would be blasphemy, and c) I'm not that good at sculpting.


Additionally, Red Scorpions don't really do camouflage anyway.  Imperial Armour IV: The Anphelion Project is quite explicit about it:


"The Red Scorpions are known to have a profound dislike of covert operations in favour of meeting and defeating an enemy in open battle.  They consider this secretive kind of warfare as well as its attendant trappings, such as the use of camouflage and infiltration, as fundamentally dishonourable and shun them unless strictly needed."


Which begs the question, why did I put a camo pattern on my Razorbacks?

Yeah. I might be overthinking this one.  Oh well, on to the next squad.