Well this marker should motivate my sluggish, gunline Necrons.  I'm not sure its actually a Necron objective marker anymore though.  The theme doesn't quite compute.  If I was really on the side of the megalomaniac androids then I would have depicted the Necron Warrior as wounded (damaged? structurally compromised?).  Maybe a twisted ankle or a rusty elbow joint rather than having his spine ripped out.  There's no coming back from that one really, not even with reanimation protocols.   And he's hardly the centrepiece of this little diorama.  I might as well just admit that I like Genestealers better.

I haven't played them since 6th edition came out.  Fielding 30 outflanking/infiltrating Genestealers stopped being fun very quickly. Ymgarls are great at jumping out of the shadows and going "Boo!" but they just get whittled down too easily. And worse, they are competing for your elite slots.  Shame really.  Genestealers are iconic in 40k and probably the most universally recognised Tyranid unit.


The new codex is rumoured for a November or January release.  It would be nice if they brought the 'stealers back. However, I reckon that the only 'auto includes' will be all the new models.  Watch out for Harpy/Erinye and Mycetic spore lists with all your elite slots filled by Pyrovores.  They must have half a million of those finecast buggers rotting away in an disused warehouse somewhere.  I reckon there will be a Pyrovore on the front cover of the new codex, single handedly wiping out an entire company of Sternguard and creating 2++ re-rollable cover saves for every friendly unit in the form of the new 'Melting Point of The Sun' rule.  The price in the codex will plummet and the price on the shelf will rocket and there will be Games Workshop board members swimming in piles of cash and lighting cigars with 50 pound notes. Mark my words.  There will be a world shortage of finecast resin.  Trygons will be rubbish and Carnifexes will be awesome again with their new weaponised maggot sprayers.  But your existing models will be useless because you'll have to buy all the new weapon attachments. And people will rage quit or have brain aneurysms on the forums and quitters won't whine and whiners won't quit.  Honest, I'm not making it up. You heard it here first.

I'm having another lull in 40k (which may turn into a full blown hiatus).  This is mostly because I started reading books again (non Black Library).  And playing videogames (non Dawn of War).  I consumed Bioshock Infinite in 4 mammoth sessions, proving that I am a glutton and therefore going to Hell when I die.  I think 40k started to pall a bit when we were playing 750 point games at the club and I decided to use Necrons.  I have about 1500 points of them and have always wanted to dabble so this was the perfect opportunity.  I actually won my first game.  I did this by standing there and shooting for 5 turns.  And nothing else really.  Ok, my scarabs were going to assault something but they all died in turn 1.  The point is, I won the game without really doing anything.  My opponent conceded in turn 5 because he was so bored.   Shooting sucks.  Line of sight blocking terrain should be mandatory in every mission set up imho.  So, anyway, this being a shooting game and all, I have started to wilt a bit.  I decided to build a Necron objective marker to cheer me up: 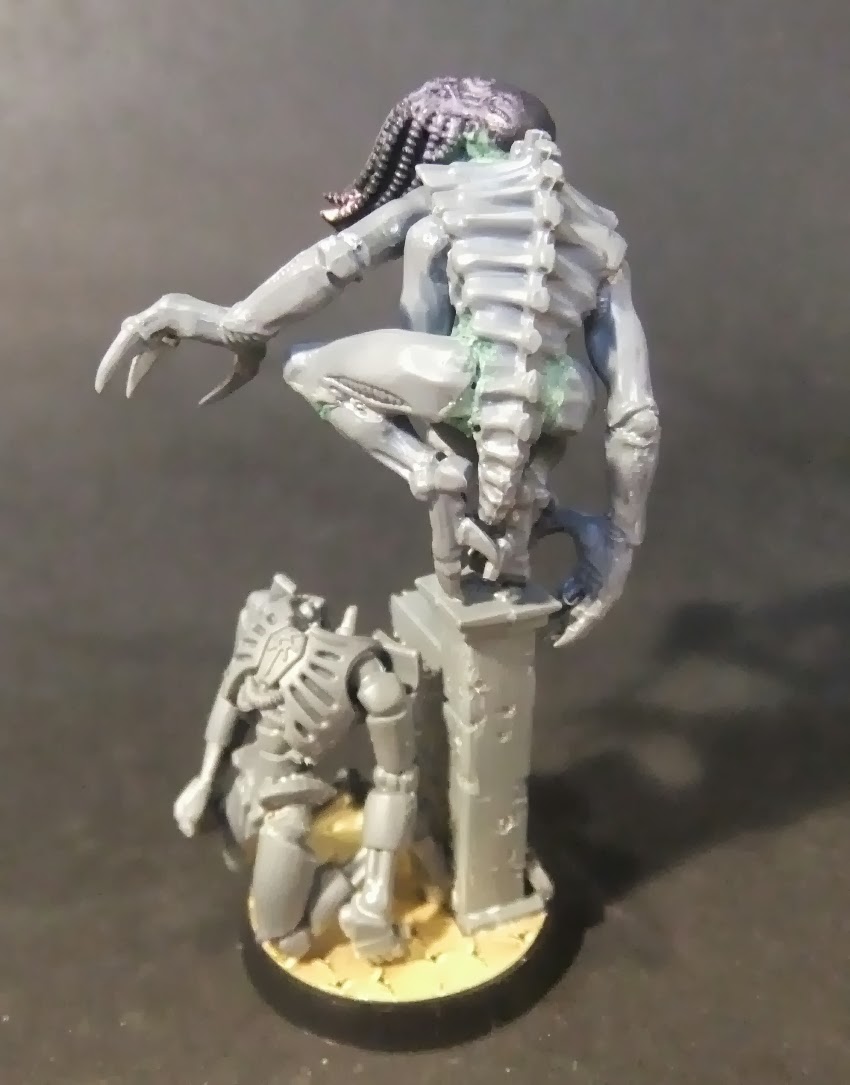 I was going to do a Necron Warrior laying the smack down on some poor, unsuspecting genestealer. 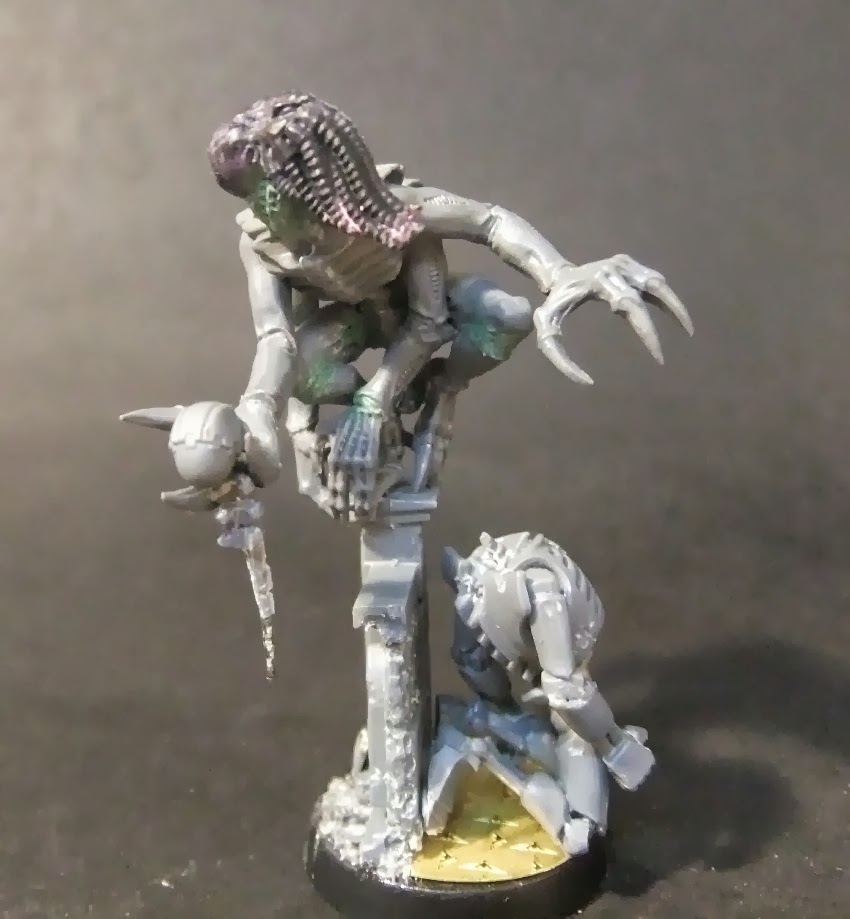 It would be ultimate expression of shooting over close combat. 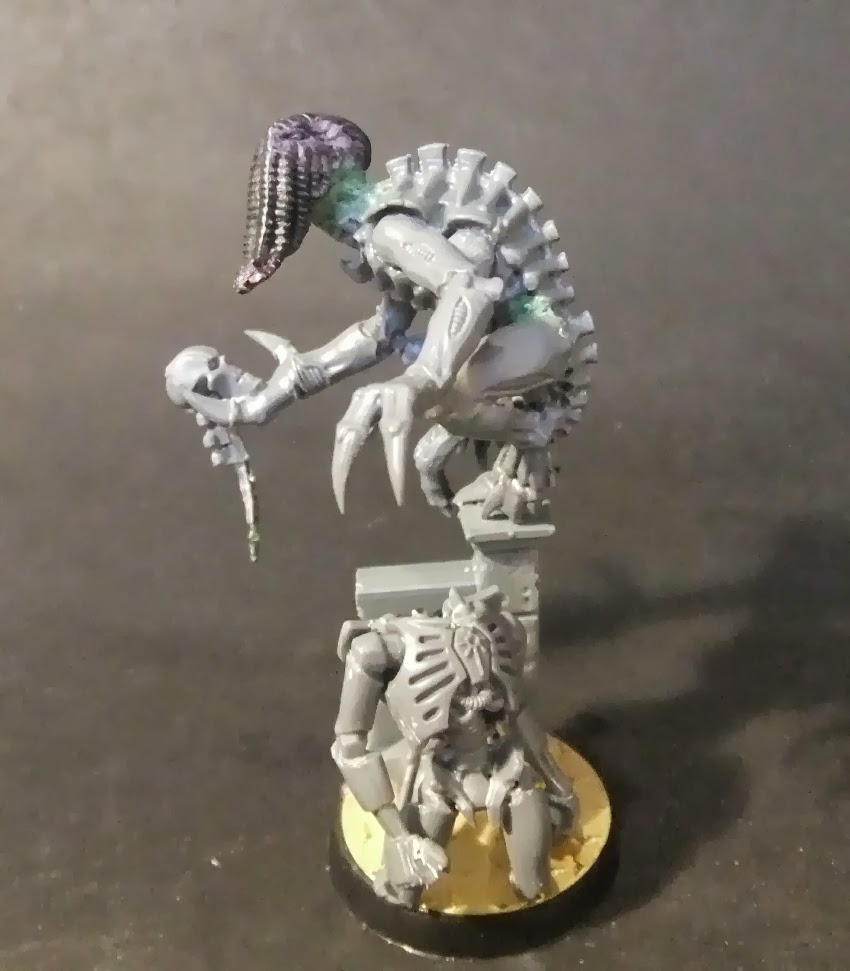 I think a Ymgarl ripping off a Necron's head sums up my feelings about the 'shooting game' quite well.

Posted by Monkeychuka at 23:59 No comments:

Finished!  Well, I could tinker with it more but I'll go blind if I put one more rivet on, so I'm calling it done. The Orkification was the most difficult part really.  Forcing yourself to glue random shit onto a model just feels... unnatural.  Drinking a bottle of wine and listening to 'Woodpeckers from Mars' by Faith No More helps.  However, it makes the rivets difficult to see, never mind glue on.


Fortunately Orks don't care about precision, symmetry and other such niceties.  Once I got into the swing of it the modifications became almost enjoyable.

The rest of it is just spikes, razor wire and tank traps (no idea why I put tank traps on the second floor of a building.  I was into the second bottle of wine at that point.)

Posted by Monkeychuka at 22:02 No comments:

Well, I finally got the landing pad to fit on top of the Manufactork.  I'm not sure its a viable piece of scenery any more since you will have to make a 17" charge up the sheer side of a building in order to assault anything inside it.  Or you could go round the back and play Qbert on the different levels to get up there.  Assuming you hug the lee of the wall in order to get defilade.  Because you can bet your bottom dollar that the defender will put something hideously shooty up there.

I really don't like Skyshield Landing Pads.  They are made for exploitation. You just plonk your heavy artillery on top and sit there all game saying, "Come at me, bro.  4++ save for 75 points?  I ain't never coming down.  Whats that you say?  Unfurled?  Bite me."  So I made the whole thing detachable with its own stand, so you can play it as a separate piece of scenery.

I started Orkifying but it was half hearted really.  I needed to go nuts with spiky bits.  I decided to build a giant totem for the side of the building.  Made from different parts of vanquished enemies.  It was a good idea I suppose but didn't turn out as well as I'd hoped.  Its made from bits of Space Marines, Imperials, Dark Eldar and Tyranids.  I'll try spraying it all black and see if it can be improved.  I think the white plasticard gives it too much contrast at the moment.  So its difficult to know what it should look like finished.

Posted by Monkeychuka at 23:04 No comments: