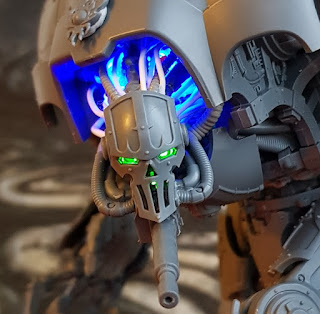 Serendipity!  I was busy wiring up Chickenhawk's head using plasticard rods.  The original intention was to make cables out of green stuff for this job.  I'd already used some wire-reinforced green stuff tentacles/cables to affix the head in a secure position.  This was great for getting the posing right but made it almost impossible to fit more tentacles in the gaps.  So I bought two different thicknesses of plasticard rod and drilled holes to anchor them before bending the other end and gluing it into the head. 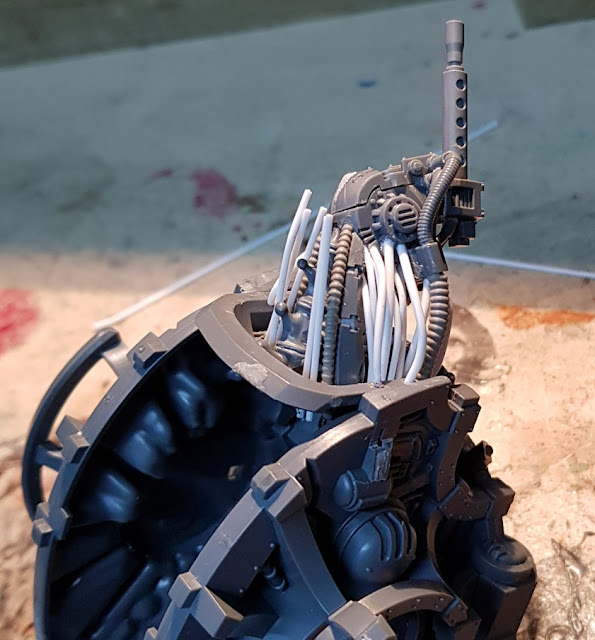 This was fiddly as fuck and still didn't seem right so I added some Canoptek Wraith claws for even more variety.  An image of an old Magic the Gathering card kept surfacing in the back of my mind.  I've always liked the Clockwork Beast artifact monster but can't understand why this Knight keeps making me think of it. 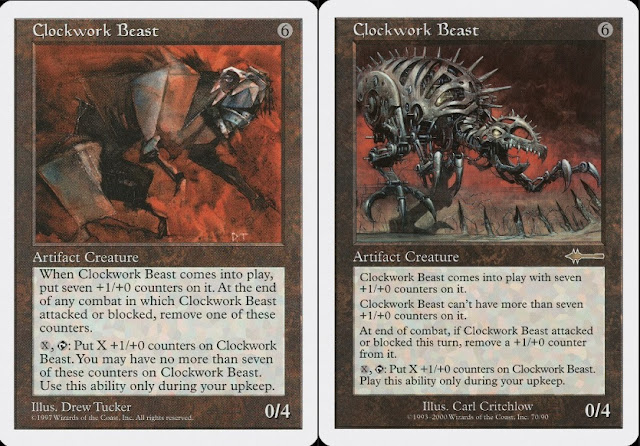 Anyhoo, whilst dicking around and generally not making any real progress, the LED which is supposed to light up the face plate accidentally flipped out of the head and into the neck.  I started to curse roundly and call my sanity into question, but then I noticed that the effect was awesome.  I'd left the neck hollow in order to fit the wires through.  The light in this space was much more interesting but left the face unlit.  The problem was easily remedied by adding another one.  So now he has green eyes.  I rushed to get a picture because there is no way in hell I'll manage to get the sodding things to stay in this position for the end product.  Looks pretty damn sweet for now though! 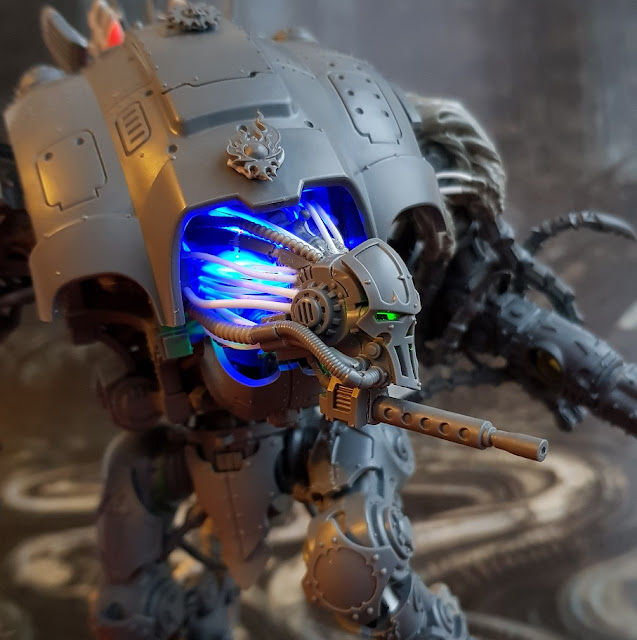 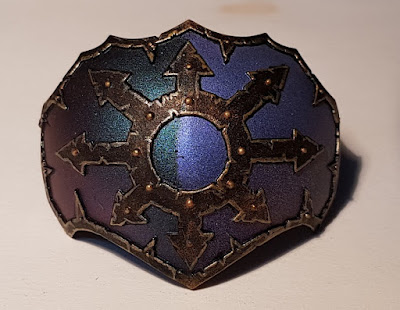 I've gone a bit Tyranid/Cthulhu on the arms. I'm not an engineer and its unclear how effective tentacles are as weapon mounts.  They probably make a decent emergency defense measure in melee combat.  I suppose it doesn't matter when it comes to Chaos and anything goes really.  But the geek in me which loves world building and wants to preserve the suspension of disbelief keeps trying to figure out why tech adepts would attach mechanical tentacles to the arm socket of an Imperial Knight. 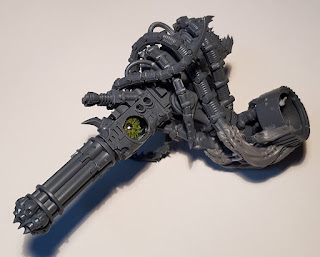 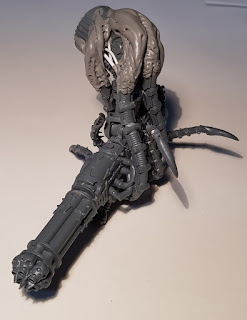 Maybe they just spontaneously grew out of the body because Tzeentch thought it would be funny.  I definitely want to give the impression that the torso contains something ghastly and organic and this helps. 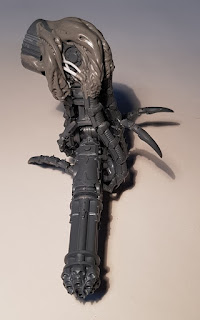 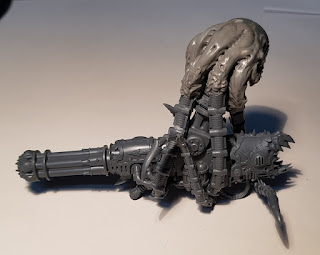 The influence of Lovecraftian horror and The Hive Mind continues on the gun barrel.  I used a Forgefiend Hades Autocannon in place of the Avenger Gatling Cannon and was wondering what to do about the large socket where the weapon is supposed to be mounted.  The hole is so big I figured I could put a marble in there and pretend it was some kind of monstrous eye.  But my marbles didn't fit.  Unperturbed, I smashed a couple with a hammer and used a broken shard.  In a way it turned out better because the coloured streak of plastic in the centre was missing and so I had to hand paint an iris on the inside.  Leaving the pupil as clear glass produced fairly convincing results. 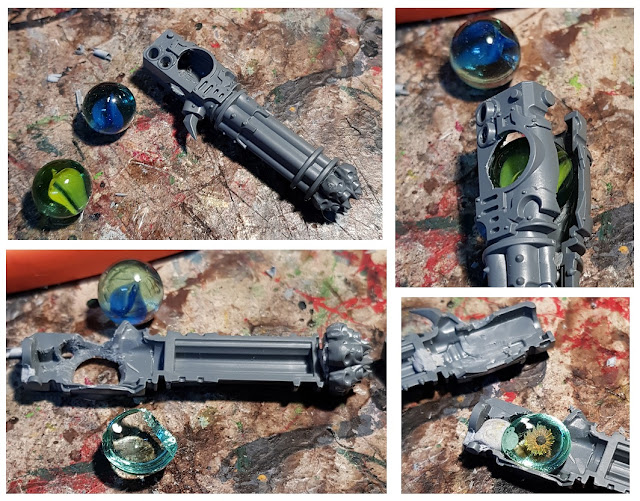 The 'shoulders' were sculpted from scratch with epoxy putty.  This was fairly time consuming and I practiced on some old models first but I quite enjoyed it.  I'm getting better with green/grey stuff and it's mostly down to the tools I use.  If you are just getting into green-stuffing then I recommend watching a series of videos on the subject by The Modern Synthesist.  It was Mr. Pink who first put me on to 'clay shapers' which are absolutely indispensable if you are going for a smooth look.  I didn't really plan it out and only wanted to bulk out the tops of the arms and attach the tentacles initially.  So I just put some ambient trance music on and went with the flow.  I added some plasticard rods and used my trusty tentacle maker to give it a more bio-mechanical look. 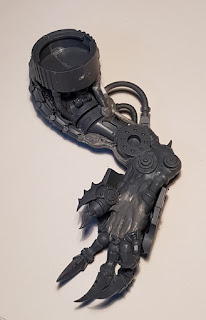 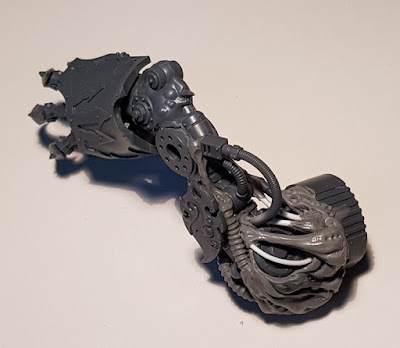 The Thunderstrike Gauntlet was easier, mainly because the claws that come in a Heldrake kit make for the most excellent ready-made fingers.  I'd seen other converters use them in the past but they mainly mount the digits on the arm supplied in the original kit.  I didn't possess this bit of kit however so had to make do with a Maulerfiend forearm.  I was stoked with how it turned out and think it looks very sinister, like an elongated claw hand.  Initially I wanted to model it as a clenched fist but I'm glad I opened the hand up now. 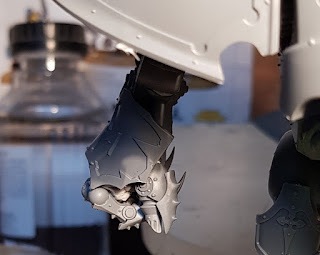 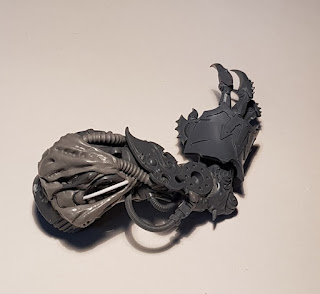 I need to work on the head and torso next which will be tricky because the LEDs and battery have to fit inside and I want to be able to change the bulbs if they break or if the mood takes me.   I'm also going to change the paint scheme and have gone for 'Psychotic Illusions' colorshift paint which blends from green to purple (see opening picture).  I'm sure Nyarlathotep would approve. 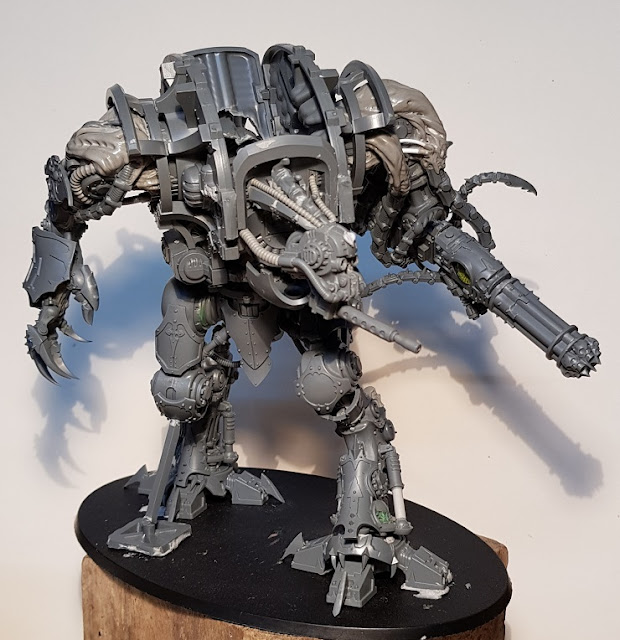