Interesting how my Nid style has subtly changed over the years (or maybe the paints have faded?).  Left Hive Guard is newly painted.  The one on the right is about 3 years old.
I've been playing Doom instead of hobbying.  Finished the game on 'I'm too young to die' and collected most of the secrets, then cursed myself for a wimp and restarted on 'Hurt me Plenty'.  I got up to the Cyberdemon boss again before realising that I'm too old and slow for this shit.  I am also completely desensitised to exploding zombies.  Those glory kill animations are something else.  Thankfully neither of my sons have the urge to play a game "thats like, from the 80's isn't it?" They are too busy being intelligent and thoughtful gamers, playing Undertale.  Bloody kids. In my day we only dreamed about graphically stunning first person shooters and 8 bit gaming was shite.  What is this backwards, topsy-turvy world we live in? I might go back to Doom anyway but 'No Man's Sky' is looming over the horizon and I feel the urge to explore the universe again after a rather mundane spell in 'Elite: Dangerous'.
In between demonic infestations, I did manage to paint one obsolete Hive Guard who has been sitting on the shelf for a few years. 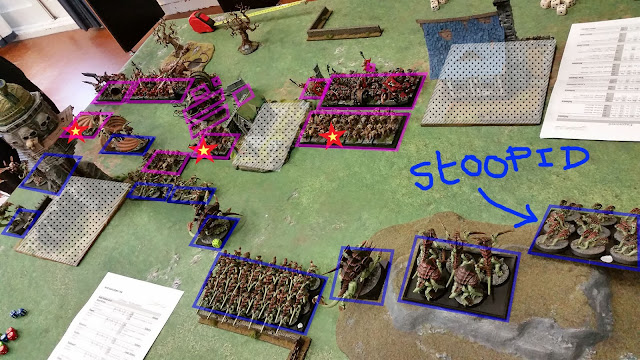 
Posted by Monkeychuka at 23:27
Email ThisBlogThis!Share to TwitterShare to FacebookShare to Pinterest
Labels: Kings of War