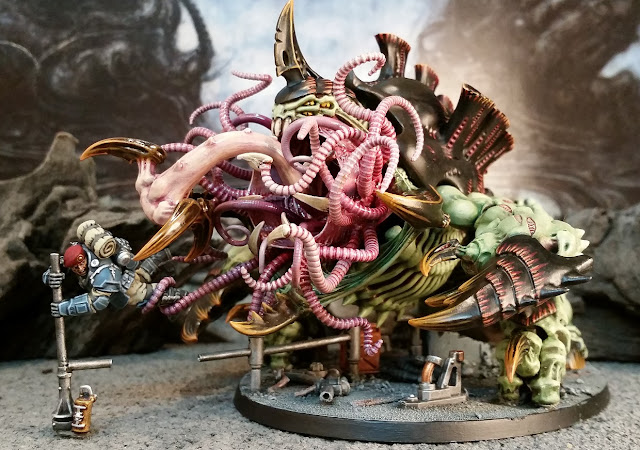 I finished this several days ago but was distracted by an idea for some fan fiction. I like putting Septimus (my hapless Scion) into dire circumstances on Tyranid bases and then trying to think of ways in which he could survive a grisly and terrifying death, despite the odds. 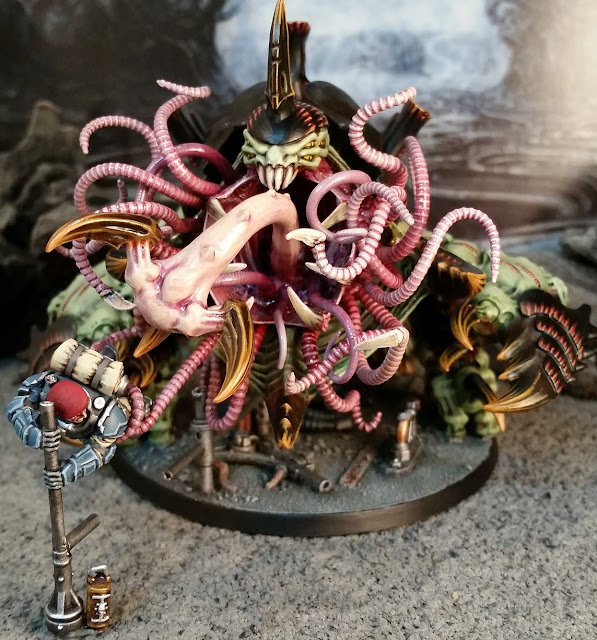 I started writing a bit of background for the model and then, by sheer coincidence, Black Library announced that it was looking for open submissions for stories in the Warhammer universe(s).  They want to showcase new writers for their resurrected 'Inferno' magazine. 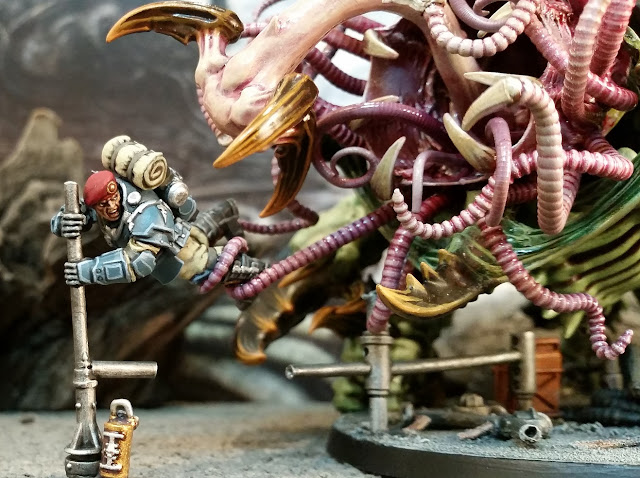 So I turned it into a short story and I'm attempting to produce something at least palatable.  Its about 4000 words so far and I've submitted my 500 word sample to Black Library already.  What the hell, at the very least it will motivate me to finish and at best, GW will own the rights and issue a cease and desist order to make me take it off my blog.  GW automatically own all rights to any stories submitted.  At least then I'll know they actually read it and it wouldn't be the first time.  A friend and I received a cease and desist order from Blizzard Entertainment a few years ago when we published a World of Warcraft guide on the Apple store.  I nearly shat myself but my co-conspirator thought it was hilarious.  He had the order framed and put it up in his toilet.  However, he did remove the App. 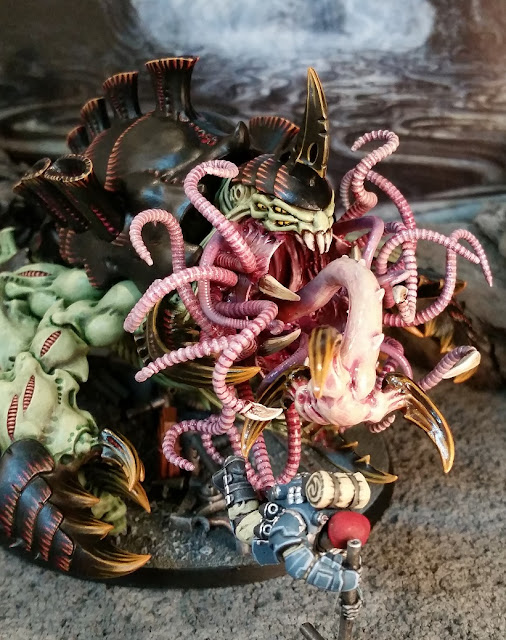 Regardless, I've included my sample here as well as the synopsis.  All harsh criticism is welcome.  I only ever showed previous stories I wrote to people that I knew would say it was absolutely marvelous darling! and that wasn't really helpful. 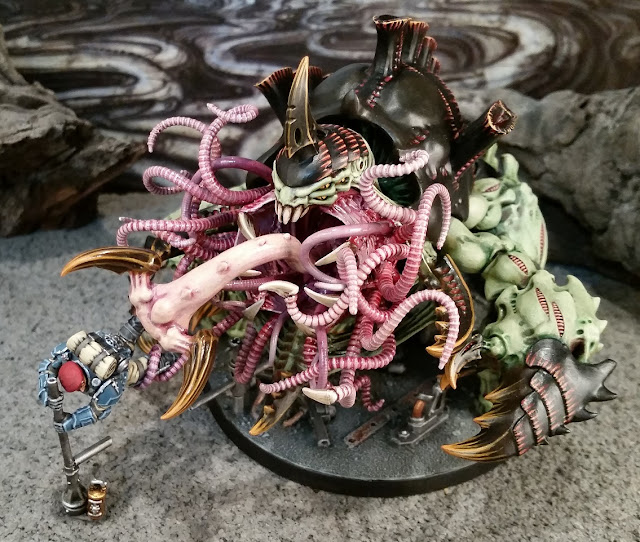 Tempestor corporal Septimus Clegg and his squad of Scions are part of the Imperial forces battling to save an Agri world from a recent Tyranid incursion.  It is a battle they are losing. Dispatched on a mission to recover a package, a ‘reliquary’ from a container terminal deep in Tyranid held territory, he assumes it contains some minor relic revered by the local inhabitants.  Arriving at the terminal, the squad find it guarded by a Haruspex feeder beast.  They attempt to distract the Tyranid and snatch the package but the plan goes awry.  Moreover, the package turns out not to be the knuckle bones of some forgotten saint but something else entirely. 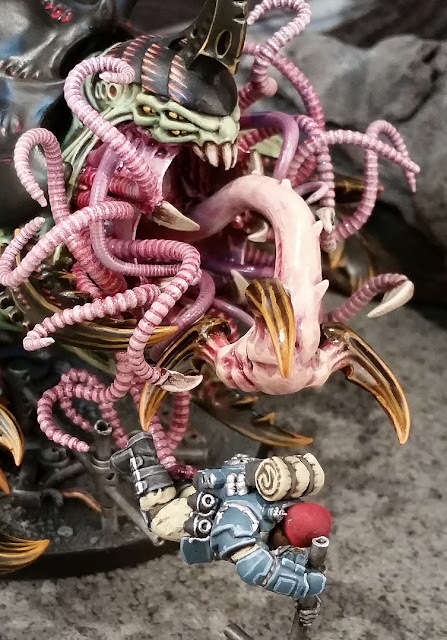 ‘Castor!  Report!’ Septimus ordered trenchantly over his headset.
No reply except radio static.  Castor could be hiding, fleeing or dead but there were other problems to deal with right now.
‘Davies, have you got the package on auspex?’ he demanded.
The trooper looked frantic as he played the scanner over debris and shattered cargo remains which surrounded them.
‘No sir!’ he barked,  ‘Its not here!’ 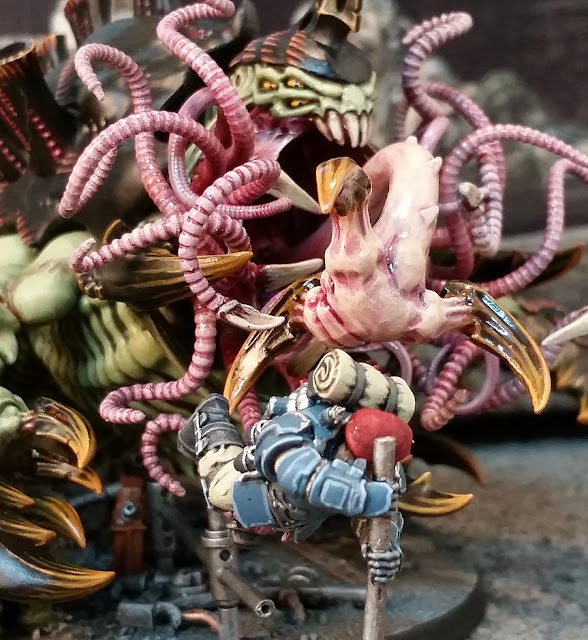 Davies abruptly stopped manipulating the auspex and with dawning realisation pointed it in the direction the beast had disappeared.  ‘Its still on the xenos!’, he jabbed at the controls in frustration, ‘The frakking thing must have eaten it!’
Septimus felt rising panic in his chest and fought it down.
‘Fall back to the rendezvous point!’ he ordered.  ‘Don’t engage until I tell you, and don’t wait for me!’  His men obeyed instantly, springing away behind the questionable safety of the stacked munitorum containers and retaining fence. He swiftly unclipped the remaining melta bomb from his pack and opened the menu display, praying unashamedly to the Omnissiah that he would remember enough to set remote detonation himself as DeVilliers had done.  He didn’t have time to be afraid.
He glanced up as he worked and saw that it was too late.  The Harsupex stood maybe fifty meters away, it’s head cocked, regarding him.   Three hideous eyes arranged unnaturally on the left side of its head glared at him malevolently.  One of its giant foreclaws was missing, blasted away. Blistered flesh steamed into the air, but it was still very much alive. It opened its cavernous mouth slowly, almost leisurely. It was filled with writhing tentacles. 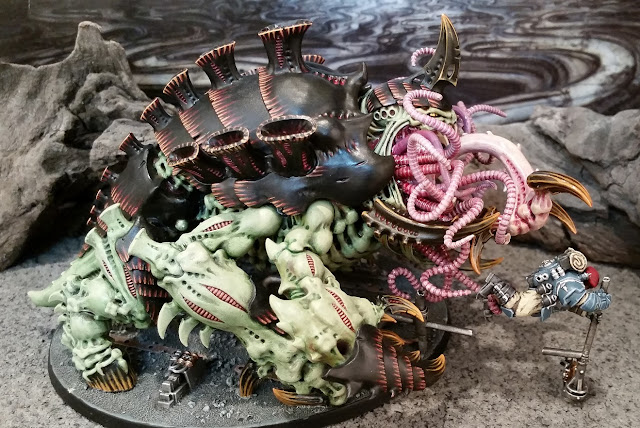 Septimus was frozen to the spot for a brief moment.  He noticed in an odd, detached way that something about the creature’s mouth was wrong.  The claw tipped feeder palps that normally spewed forth from a Haruspex were replaced with strange, undulating tendrils.
Then a bellowing roar issued from the orifice and the creature pistoned forward on massive forelegs. Serrated talons ripped up clods of earth in its wake.
Cursing roundly, Clegg punched the timer override selection. He grabbed the bomb with one hand, stumbling over the wreckage the way his men had retreated.  If he tripped the override, it would explode in exactly five seconds.  Whether he instinctively knew this wouldn’t work or whether he just didn’t have the nerve to stand there as bait wasn’t a question he wasted time considering.
Bolting back through the gap in the fence, he took shelter against the buttress of the admin block.
The cacophony of steel being torn apart in the background told him that the xenos had reached his former position.  With a hand that was not quite trembling he engaged the controls of the melta bomb again.  The screech of metal behind suddenly stopped.  He could hear Davies over the headset requesting instructions.  The sound of his own panting.  The sighing of the wind as another dust storm approached.  Then the world exploded around him. 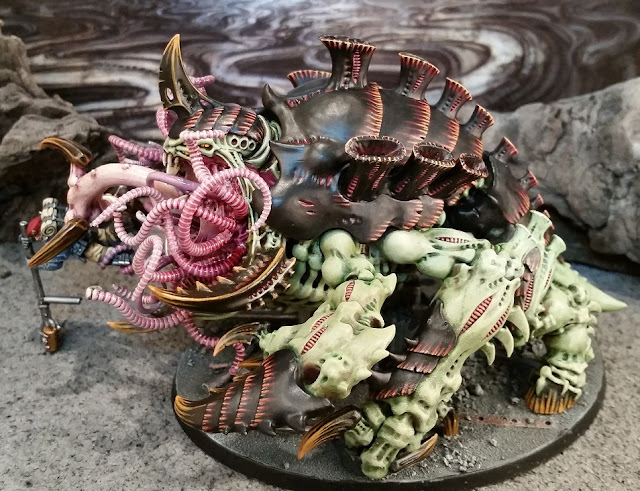 Posted by Monkeychuka at 22:35
Email ThisBlogThis!Share to TwitterShare to FacebookShare to Pinterest
Labels: conversion, Haruspex, Tyranids