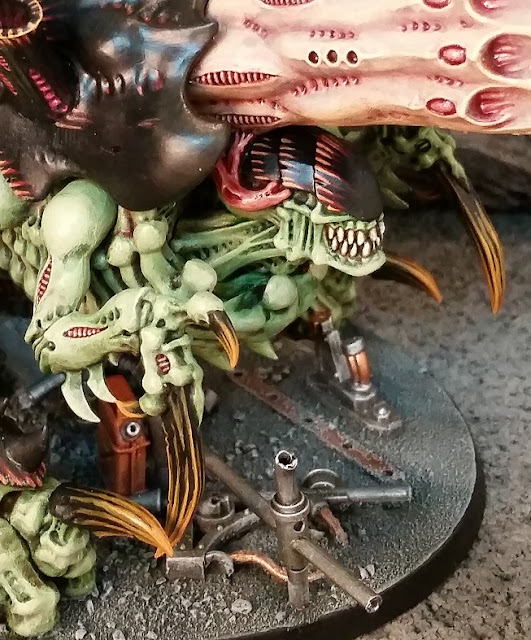 My Gun Beasts are finally painted up.  I've had these models for years in various states of completion and wasn't affected by sudden drought of models that Nid players are experiencing.  There seem to be a lot of new players as well after the release of the last codex.  Apparently there is a huge shortage of stock in Tyranid models, not necessarily in the stores but online.  That's what I want to believe anyway, because then I will feel smugly vindicated.  All my guilty and surreptitious accumulation of biomass over the past decade is finally paying dividends. 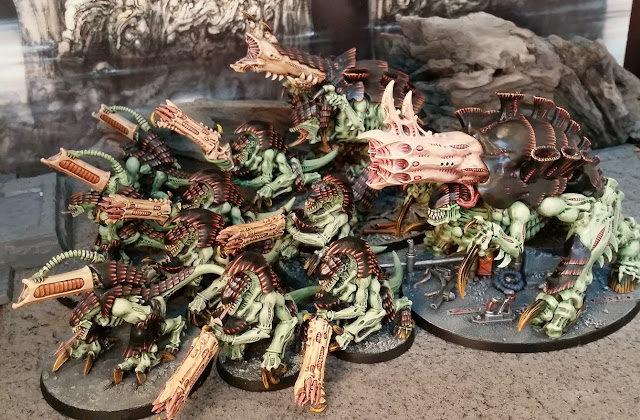 The vaguely suicidal notion of fielding 3 Biovores in my army several years ago is now a shrewd decision.  The half dozen Hive Guard I purchased in 5th are great again. Except that in 8th edition I don't feel begrudging resentment at using them because they aren't the only Tyranid artillery piece worth a damn now.  There are a plethora of other options for gun beasts.  The only reason I haven't tried Tyrannofexes yet is because I haven't figured out how to pull the birthing sac off my Tervigon and convert one.  There's a pristine Carnifex, still in the box tucked away on a shelf, waiting to decide whether it will be a Screamer Killer, gunline Thornback or Old One Eye. A kitbashed venom cannon will be repainted as a Miasma cannon and make an excellent addition to one of my Flyrant models.  The latest codex has provided many reasons to buy new models but I'm having more fun playing with the forgotten backlog of Nids that I never got round to using. 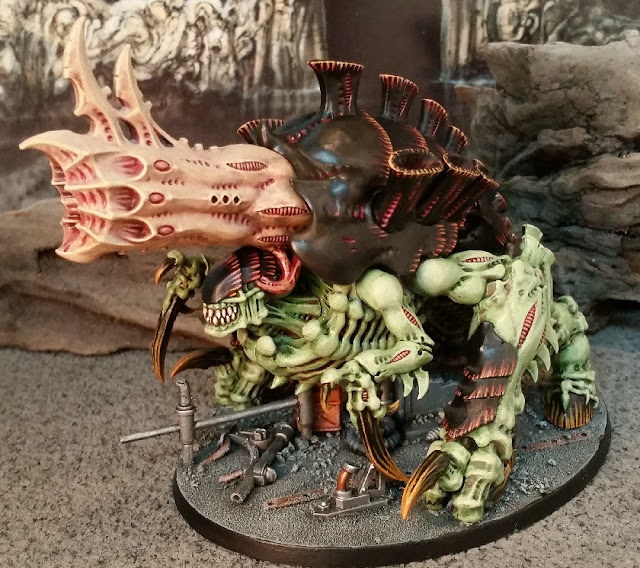 The Exocrines are fully repaired and painted up.  I might do a bit more work to the converted one which I never really liked but I built it before the official model came out and I managed a fair approximation. 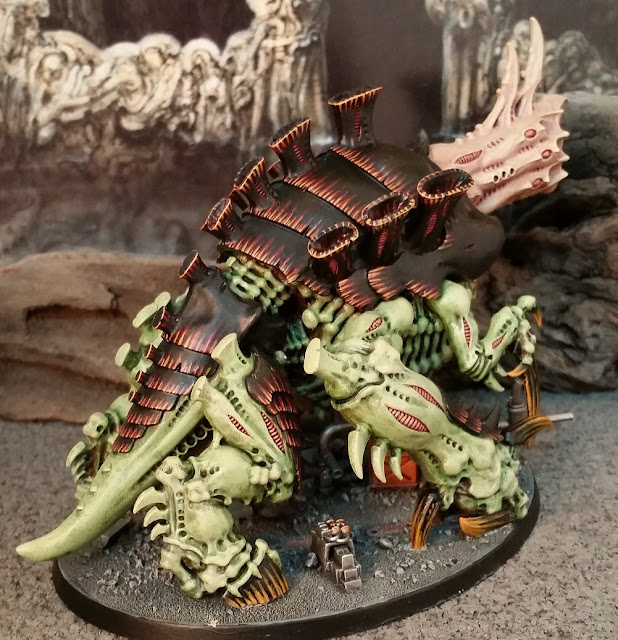 The new Exocrine is fully magnetized and I'm feverishly working on the Haruspex variant of the model.  I added about 7 more tentacles.  I couldn't help myself, it was like a freakish compulsion.  Needs. More. Tentacles.  I eventually managed to stop but then had to break it down into sub assemblies again and repaint the extra appendages. 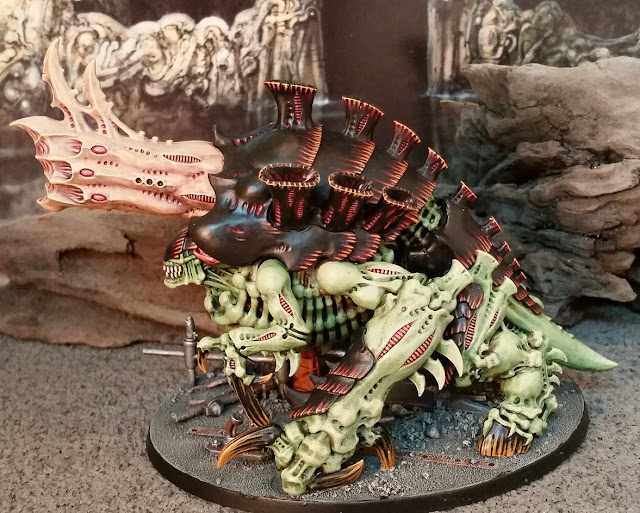 I spent quite a lot of time on the base as well.  I'm quite pleased with that broken fence which, when the heads are swapped out, will extend outwards from the Haruspex maw and provide Septimus (my hapless Scion) with something to cling to desperately as he is unceremoniously devoured by the beast. 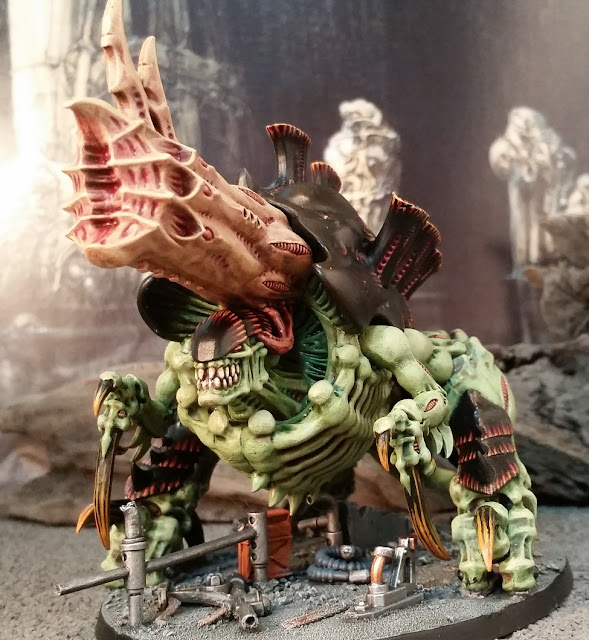 My Hive Guard are also repainted from their 5th Ed colours.  They are the old Finecast versions and I worry that I'll want to take the newer Shock Cannon weapon symbiote eventually.  However, the range of this gun is below par really at 24", especially in a unit which doesn't want to move in order to take advantage of the Kronos adaptation.  So I'm quite happy with the Impaler Cannons for now.

I briefly considered painting the Kronos detachment a different colour in order to differentiate between the various Hive Fleets.  But attempting to repaint my Nid army a 3rd time is a sure step down the path of insanity.  I'll just use tape on the bases to suggest a separate detachment in a competitive environment.  Or just not bother.  I'm not entirely happy with splitting my Hive Fleet up and it doesn't feel very fluffy.  From a tournament standpoint however, I don't feel its massively more cheesy than fielding Space Marines with Imperial Guard.  Or putting Guilliman in charge of my Red Scorpions and calling them Smurfs.  I'm already well down that road to damnation. 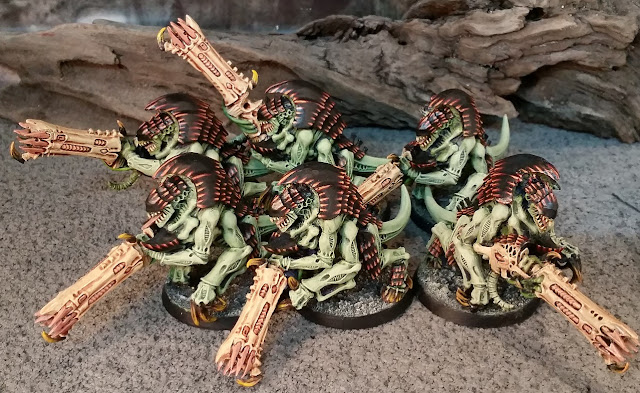