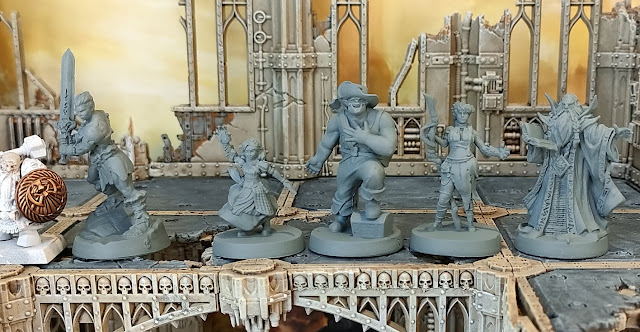 Ok I'm phoning it in.  I did nothing at all for a week and then undercoated the models in a quick burst of guilt.
I spent about half an hour trying to clean the mold lines off and was partially successful.  But that bright red plastic is horrible.  Bendy and oily it does not take well to being filed, producing a crumbly finish. The mold lines almost have to be sliced away.  I probably won't attempt any conversions with the Heroquest dudes.  The models themselves look a bit better with a nice matte grey finish (Mechanicus Standard Grey rattle can)

Apart from that I've done nothing.  Well, apart from starting another conversion but that was not in my Squaduary plan and it ended badly when I slashed open my thumb.

I also hemmed and hawed about including the Dwarf figurine in my Heroquest pledge (because the best thing about Heroquest is the Dwarf!).  But I don't like either of the models really.  So I dug out an old Dwarven Hammerer who was intended to be used in some game or other.  I think he's meant to be a paladin or a cleric.  I had gotten as far as painting his shield Dwarf Bronze before deciding that the tinny, cheap metal finish was awful and he was abandoned.

Digging out the model again all these years later, I thought it was cool so I added a splurge of Cygor Brown Contrast (+ contrast medium) to see what would happen.  It really adds contrast!  Adding highlights of Gehenna's Gold and MSP Bones Dragon Bronze was quick and easy too, so I'm posting the paint recipe for future reference. (I have several 'recipe' books but they are all missing). I've still got nearly a full pot of Dwarf Bronze because I thought it was rubbish but I'm glad I saved it!

Posted by Monkeychuka at 20:47
Email ThisBlogThis!Share to TwitterShare to FacebookShare to Pinterest
Labels: Fantasy