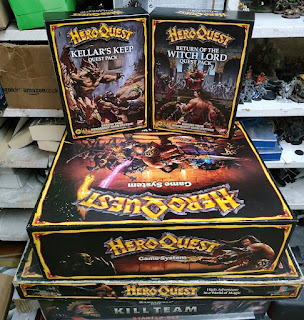 Ok, I'm jumping on the Squaduary-not-Squaduary bandwagon.  My squad is a selection of player characters from the HeroQuest kickstarter.

We had a family game over the Christmas break and these were the chosen adventurers.  Plus the barbarian.  The barbarian is an auto-take and since there are only 4 of us (3 players and a DM) we use it as an semi-playable NPC to get us out of tight spots.  'Barb the Barbarian' is an interesting sculpt.  There are female versions of all the basic heroes in the updated set.  Very politically correct.

Continuing from left to right we have 'Wendy the Warlock', 'Verdaine the Druid' and 'Waaagh! the Bard' (yes, he's an Ork bard). I'm not sure most of my family really get into the roleplaying aspect when comes to naming characters but then I called my wizard avatar 'Jandalf the Great' so I have no cause to complain.  In one game, I cast the spell 'Pass Through Rock' and inadvertently phased through to the boss room, triggering a party wipe.  My family renamed him 'Jandalf the Mediocre'.

I don't actually recall joining the kickstarter.  I dimly remember ordering shit online back in 2021 when I was having a lockdown low, but I was almost certainly intoxicated at the time.  I can't even remember how much I paid for it.  My eyesight tends to develop blind spots when I'm settling my credit card bill at the end of the month.

Anyway, this lot arrived out of the blue in November and I was completely surprised.  My surprise turned to delight when I opened it up and saw that it was a more or less faithful re-creation of the 80's classic.  I could harp on about how this (and Space Hulk/Crusade) were my gateway into model collecting as an adolescent struggling with reality, but I'm sure everyone has very similar stories. 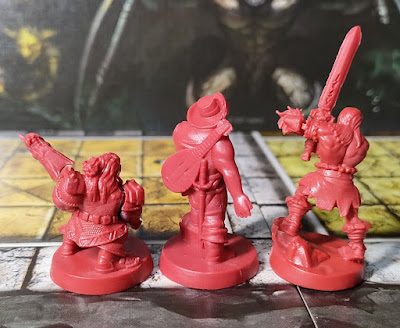 I've been meaning to paint them since then.  I always mean to paint my boxed sets, but I never seem to get round to it. So I'm going to publicly commit this time.  Actually, there are over 70 minis in the box so I'm not promising the whole set!  Just these five for now.  Hopefully it will give me some momentum.  As stretch goal, I might do the furniture.

Some of the sculpts are a bit ropey and whoever put them together with superglue deserves a savage beating.  Just look at the male barbarian's arm!  That's shocking!  Totally out of order.  However, since they aren't the best models ever to come out, I don't need to paint them to the highest standard.  It should make a nice change.  I take far too long to paint minis and need to speed things up. 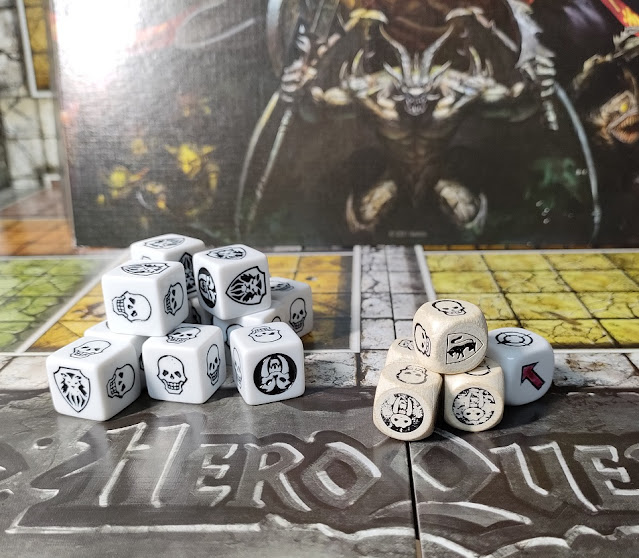 They deserve a bit of love though.  I mean, look at my old dice next to the new ones.  Those dice have had some serious play time over the years.  The faces are practically worn away.  Note the 40k scatter dice used as a stand in for a lost one.  You get far more spares in the new set but I wish they'd kept them as the 'bunny dice' to be honest.

Speaking of bunny dice, if you've never heard of HeroQuest then this video is by far the best advertisement for it that I have ever seen.

Posted by Monkeychuka at 19:50
Email ThisBlogThis!Share to TwitterShare to FacebookShare to Pinterest
Labels: Fantasy