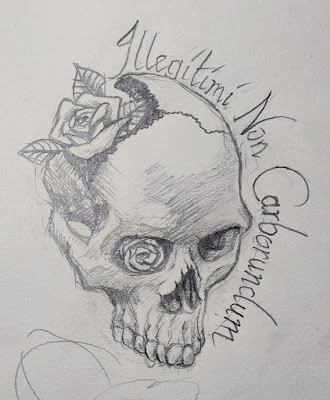 Assassins Creed, Cyberpunk, Fallout, Skyrim, Horizon Zero Dawn are all ruined.  If I play them again, I will inevitably start drawing unfavourable comparisons about how open-world games should be designed.  Only Breath of the Wild and Subnautica can stand up to this juggernaut for me.  Odd really, because I'm not a fan of 'Souls-like' games and threw away the original Dark Souls in disgust after only a few hours.
In fairness, there's a lot of bullshit in Elden Ring too.  I am now very familiar with the term 'input reading' for example
It consumed my waking hours for about a month.  I was a willing victim.  I eventually managed to slay the Elden Beast by employing multiple cheese strategies simultaneously.  Then I rolled a pure melee Wretch character and did it all over again like a real masochist.  Not bad for an old git who's first video game was Frogger on the Atari 2600.  I strongly advise breaking up with your girlfriend/divorcing your wife before purchasing this game.  It's going to happen anyway so you might as well save time and annoying interruptions. 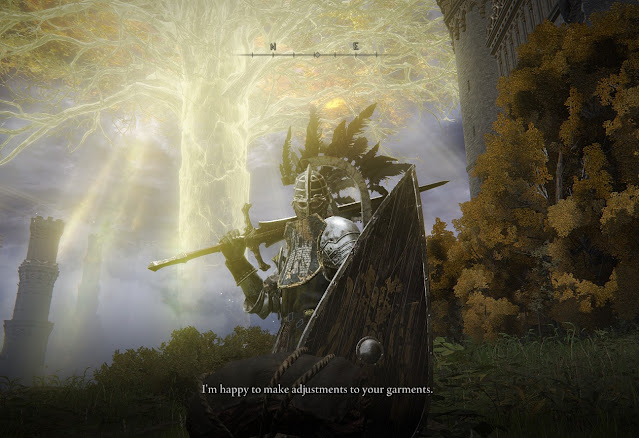 I did a bit of drawing too but that hardly counts. My son asked me to design a tattoo for him.  He has reached an age where many Kiwis decide to brand themselves and there's a fine tradition of it here in the Land of the Long White Cloud.  I never really wanted to get one myself.  I'd only pluck up the courage to get a tattoo whilst blind drunk and would almost certainly choose something innappropriate and regrettable.  A barcode on the back of my neck perhaps.  Or an anchor on my upper arm with the word 'Mum' underneath.  Just to be ironic.

Knowing that I'm not a fan, my son adopted a subtle approach, "Yo Dad, you're into 40k right?  So you know a lot about painting skulls?"

This kind of bald flattery spurred me into designing the skull in the title picture of this post with the family motto down the side.  It was only when he said that he wanted flowers in it that I struggled.  Grimdark skulls?  No problem.  Skulls with roses?  That's out of my comfort zone man.  I'm not even sure he likes it. 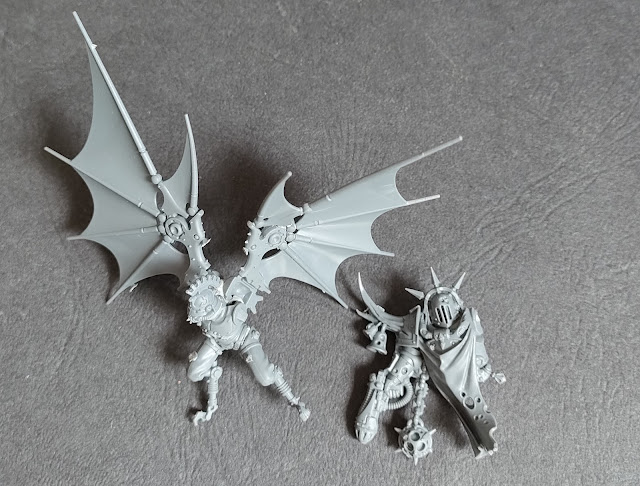 So, anyway, on to actual hobby.  I started work on this project ages ago but it never got traction.  I converted a munitorum container as soon as they came out.  I also bought several packs of Citadel Skulls and it seemed natural to combine the two. I really liked the result.  In fact, it seemed a little too good to be used as a piece of scenery.  I later picked up a box of Flying Monkeys (Pteraxii) and thought it would be nice to model one kicking open the hatch to reveal a small mountain of grim cargo. 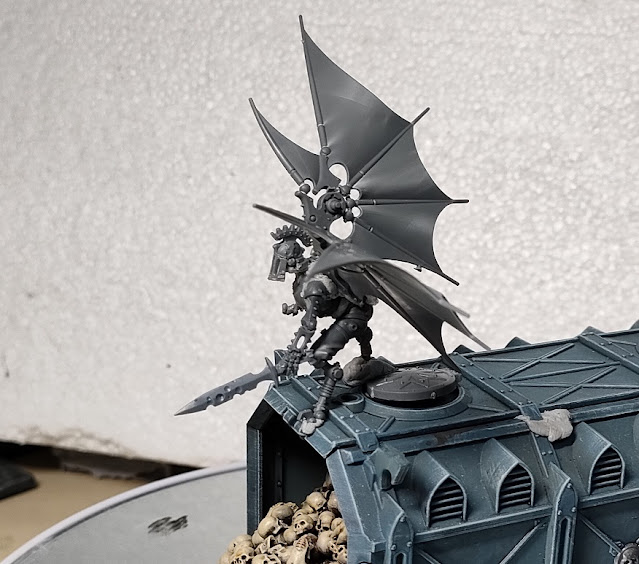 But the wings reminded me that I've always wanted to have a crack at converting one of my favourite Dan Abnett characters.  I'm not going to say exactly what, just in case I bollox it up.  Then I can pretend its a Sicarian Ruststalker or something.  It's not a playable character in 40k anyway. 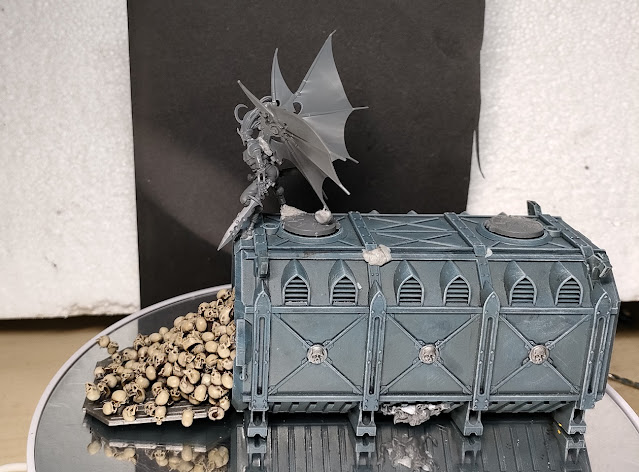 The swords were originally from Ruststalker/Ranger kit and after slashing my thumb open trying to modify them I gave up and used some fantasy versions from the Age of Sigmarines. (Mortis Engine I think.  My bits box is more of a bits 'pile' these days) 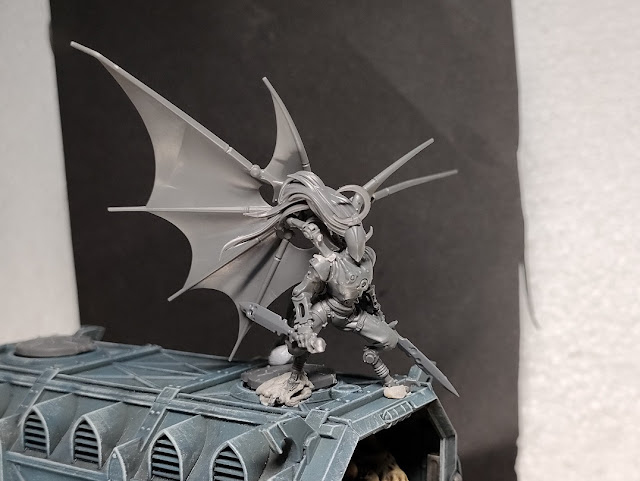 After destroying a perfectly good Plague Marine, I realised that I didn't like the helmet so poor old Mistweaver Saih was decollated and utilised.  She is basically a lump of misshapen plastic now.  Oh well, it's not like I played Silver Tower more than once.
The arms are spares from the Tech Priest Dominus. (gotta love that kit) 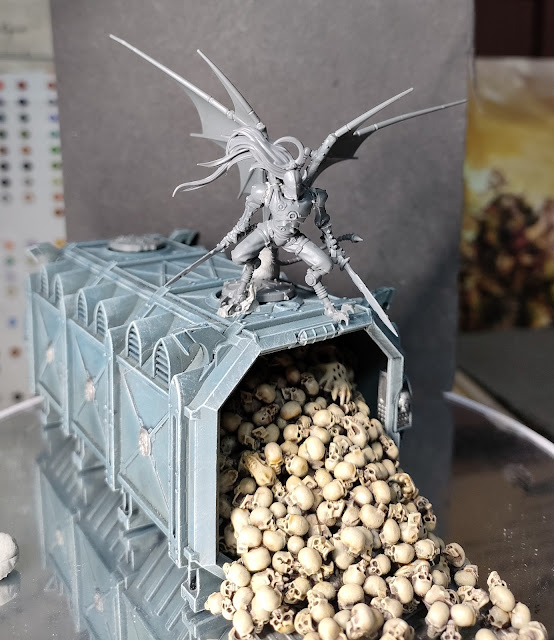 I quite like him at this point.  I think I'll concentrate on painting the figure before moving on to the munitorum container.  I put some Chaos hatches on the top and the whole thing is a rush paint job.  Definitely only '3 colour ready' at the moment.  I should probably try out some weathering on it too. 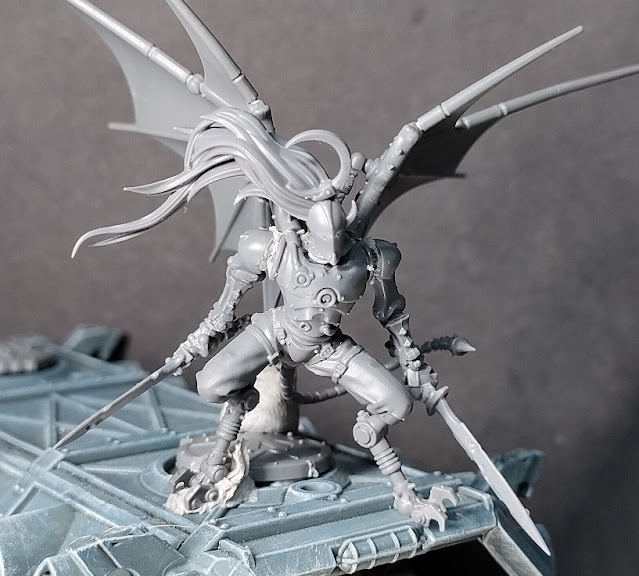