Day 2 dawned bright and early. Having achieved a form of consciousness via the judicious application of coffee and cigarettes, I discovered that my first opponent was Kent.
Game 4 ++Purge the Alien++Hammer and Anvil++Eldar++
He was fielding Eldar. I approached the table inwardly cringing.  I'm told that if you find a winning formula in 40k, you spam the ever-loving crap out of it.  However, Kent's list was decidedly different.  What I initially thought was 2 Wave Serpents and a squad of Wraithguard, turned out to be only 1 Wave Serpent, a Fire Prism and a squad of Wraithblades.  In fact Kent was playing a bewildering variety of units. Farseer, SpiritSeer, Warlock, Striking Scorpions, Dire Avengers, Guardians with Starcannon platforms, a Crimson Hunter and a Wraithlord.  He had the lot.  It made for a very pleasant game apart from the point where I almost spit my dummy over an argument about being able to choose which units to overwatch.  However, even that ended amicably since he failed all his snap shots.

Given the mission and the nature of my opposing army (I was too ignorant to spot that he was playing a balanced list with plenty of close combat) I lined up on the starting blocks and ran at him.  Not much of a strategy, granted.  My Tervigon declined to provide him easy kill points until the last turn.  I was still fearful of anything that even looked like a Wraithguard even if it was wielding Ghost Axes.  So I fed his Blades on the left flank several broods of Termagants boosted by Gertie's (4+ poison) toxin sacs.  This proved to be exactly the right thing to do and the ghostly constructs were overwhelmed.  (Note to self: Don't try this with D- bag  Scythe Wraithguard; the overwatch is brutal)

My right flank didn't fare so well.  Kent had cleverly placed his Guardians on the 3rd floor of a ruin with a Warlock (I think) giving them a ridiculous cover save.  He masterfully supported them with Striking Scorpions dancing in and out of terrain and my advance lost momentum, grinding to an abrupt halt.  Fortunately for me, the Scorpions rolled badly on Battle Focus and didn't make it back into cover on turn 3. My Flyrant swooped in with his twin linked devourers and they failed every single armour save.  Kent's luck was running out.  The Crimson Hunter made no impact and he failed to face-plant my Flyrant.  Termagants made a cheeky 8 inch charge into terrain and might have bagged his Warlord had the game gone on longer.  We only got to the end of turn 3 though. What can I say?  It was a leisurely game

In the centre of Kent's deployment, the Mawloc actually scored a deep strike hit but got carved up by the Wraithlord.  Mawlocs really aren't worth 170 points.  I would have been better served with a second Tervigon which I have finally begun to realise, can be used offensively.  The Hive Guard performed consistently and took out the Fire Prism in turn 2 (I should have spammed the ever-loving crap out of them). The Swarmlord hugged cover like a whipped dog all the way across the board, failed his charge and consequently didn't make it into combat.  It was a good thing really since Kent would have won the game had he taken it down (3 victory points).  Even so, it was a close thing.  Fido was dead and Swarmy was on 3 wounds when the game ended.  I think the final tally was 5-3 to me but I honestly can't remember. So, a win against Eldar but more by luck than judgement. 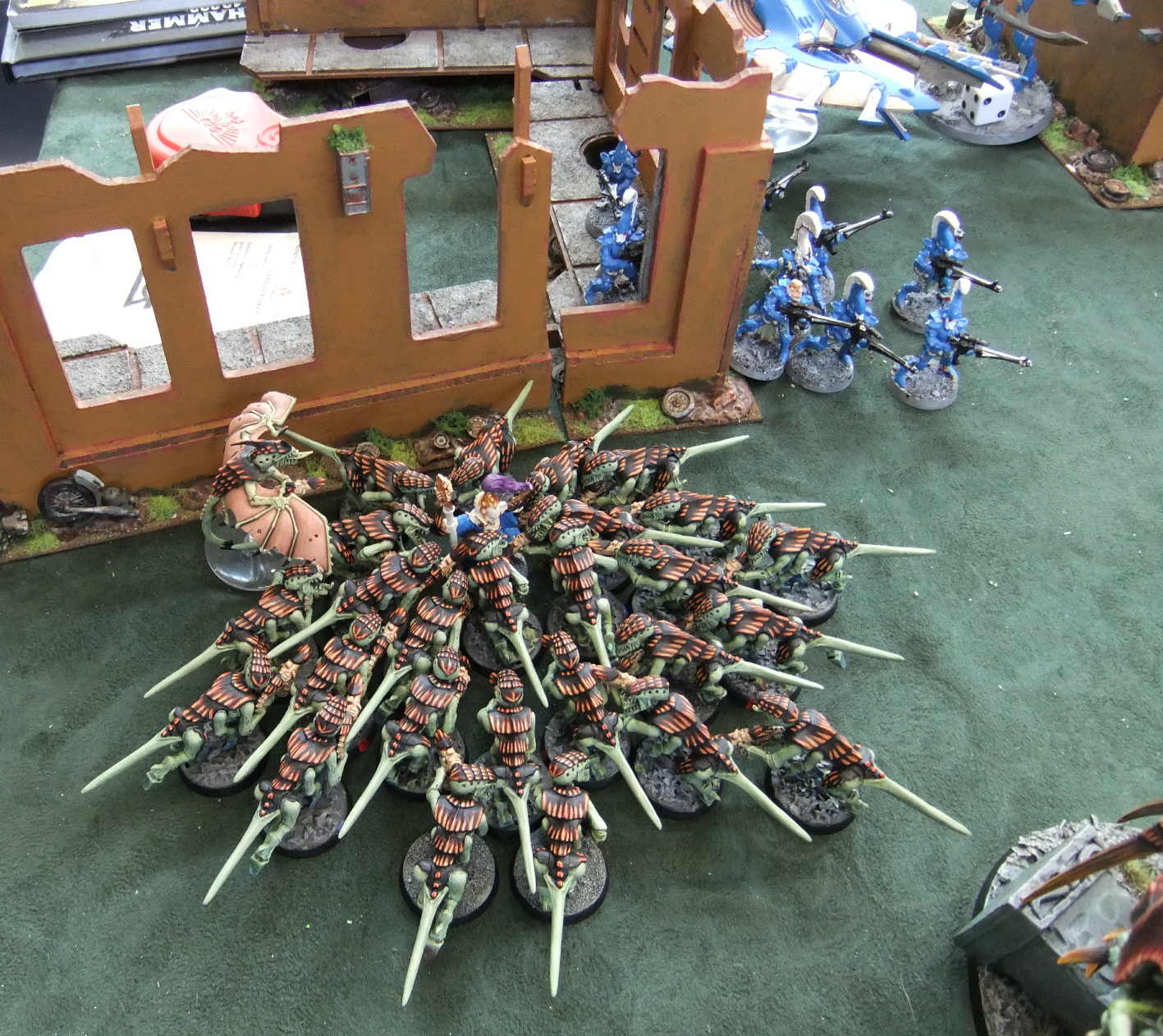 Buoyed by my first victory of the tournament, I was paired up with Scott and his Space Marines.  He was running fifty tactical marines with Vulkan H'estan and all sorts of flamer nastiness.  There were some missile launching Devastators and assault marines too in what was essentially a foot slogging army.  Scott had brought one drop pod with a Deathwind Launcher which was a bit of a worry.  Slightly more concerning was the 2 Land Speeders with Heavy Flamers that he kept in reserve.  Finally, he had a Predator Destructor with Sergeant Cronos, 2 Heavy Bolters and an Autocannon which whittled down my forces throughout the game.  Luckily for me, there was plenty of cover on the table.

We had 5 objectives, Scott chose to go first and spread out.  This cost him later in the game since I denied flank on the right and put all my objective markers on the left.  Without any transports to zoom across the board, he had to leg it and arrived too late.  Still, he played solidly and knew his stuff.  If he had brought more drop pods I would have been in trouble.  Additionally I didn't roll Iron Arm or Endurance on any of the big monsters.  This could have been the death knell for me and highlights the problem with psychic powers: you don't always get what you want.  Fortunately, the Zoanthropes did and were able to cast Endurance in support.  Scott's army was a little more forgiving than some, so I got away with it.  His 'flaming death' Land Speeder mishapped and suffered a "Terrible Accident!" and the drop pod scattered too far, reducing it's effectiveness.  He was a lot more cautious with the remaining Land Speeder and consequently my Hive Guard blew it to smithereens. (Hive Guard.  Spam them.  Now.)

Had even a single Speeder made it into my back field, it would have played merry hell with the squishy deckchair units claiming 2 of my objectives.  But they didn't, and my dice were playing nicely today.  Swarmy ambled lazily across the battlefield, pausing occasionally to eat.  He made more of a meal of Vulkan H'estan than was absolutely necessary, but he did his job.


Noticing that Scott didn't have many (any?) power fists, I rolled the Warp Speed psychic power on the Tervigon and started using her aggressively.  She skittered all the way across the board and punched the Predator in the nuts, before tarpitting a threatening unit of tacticals.

The game went to the wire and ended on turn 6.  Scott was a great opponent and even reminded me about some things I had forgotten (I gave him my best sportsmanship).  I almost felt guilty with the win.  With better luck and a newer codex things might have been different (I think all the pure Space Marine players placed near the bottom at the tournament.  They need a new codex and I feel their pain). I hope GW provide him with a Salamander's supplement too (he has over 4000pts of the green buggers).

All in all, a good weekend.  It was a bit disheartening to see that 40k had the lowest representation at the tournament.  Mind you, I saw a lot of cool looking Warmachine armies and the Flames of War matches all looked relaxed and laid back, with plenty of time in between games.  I struggled for time in every single round and didn't finish two. My last game took nearly 3 hours.  I reckon I might be shelving the Nids for the moment.  I just don't have the mental stamina.  This was despite all my efforts with spreadsheets, psyker cards, magnetised bases, picking up 4 models at a time and running in my movement phase.  I bought some cheap, 2nd hand Necrons during a 5 minute toilet break so I might tinker with them in future.

If I was to try and optimise my list, I would have dropped the Mawloc like the dead weight it is and replaced it with 3 more Hive Guard for 20 points less (there was a lot more mech at the tourny than I anticipated).  I'd probably keep the last Elite slot for Zoanthropes.  They provided essential synapse and flexibility.  I switched their psychic powers out depending on the situation, using biomancy, telepathy and book powers over the 5 games.   The Swarmlord was both good and bad.  He cannot be ignored and focuses your opponent's attention away from the squishy gribblies (which is what wins you games).   The visceral pleasure of having a huge beat-stick on the table is quite compelling.  But he's slow and has no real ranged threat.  The Tervigon was my best unit and I should have taken two.  I could have dropped Swarmy and almost been able to field 3 with the spare points.  The Biovores had negligible impact.  I should have either spammed 9 of them and themed my army around it, or just not bothered.  The Flyrant did it's job and provided much needed mobility and emergency response, but its an expensive model at 260 points and surprisingly fragile for a MC.  The gargoyles were great.  Fast and cheap, they can be used offensively or defensively providing mobile cover and support. If only the models weren't so damn fiddly.  I swear that GW hates me.  Have you ever tried to remove Gargoyles from the front in a close combat?  Its maddening.

Finally, my predictions from yesterday were all wrong.  Glenn Burfield won Best Presentation (damn him all to Hell... not really) and Brendan won best general with Death Korps of Krieg .  I placed 9th which is surprising, given my drubbing in day 1.  Our wargaming club http://warincorporated.blogspot.co.nz/  did ok as a whole.  Jordan's CSM placed 8th and Alistair's Tau 7th  (I think Mike came last but he was playing Space Marines and worse, fluffy space marines).  Chris couldn't make it, but I'd have been very interested to see how his dakka boys had fared.  There were no Orks in the competition at all.  No Necrons, Dark Eldar or Blood Angels either and Space Wolves only taken as allies.  I saw a lot of Tau and Eldar however.  The future is bright.  The future is yellow. (Iyanden Darsksun or Tau Light Ochre, take your pick)

Posted by Monkeychuka at 11:41
Email ThisBlogThis!Share to TwitterShare to FacebookShare to Pinterest
Labels: Tournament