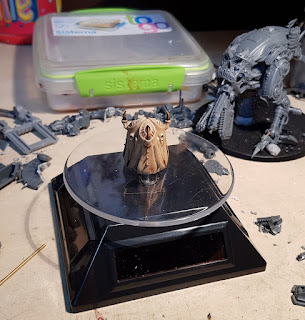 I bought one of those turntable things from a model shop the other day.  Which felt a bit weird.  Almost like buying dirty magazines from my squalid newsagent down the road, years ago.  "Ooooh! Does Sir like to look at his models from every angle? Does he? Hmmm?  Does he like to make them ride on a pedestal? Ooooh, suit you sir!"
The 'Solar Spinner' is a rotary display stand made by Fascinations (wonders created by physicists). After the initial embarrassment wore off, I became captivated with the thing.  It's solar powered and I can't find a way to turn it off.  You can change the direction of the spin, but not stop it.  It works under flourescent lights and spotlamps too.  So it just spins round and round forever.  Unless I put it back inside the box.  But then I can't see it so I don't actually know whether it is still spinning or not.  Sort of like Schrödinger's cat.  It's about as interesting as watching things in a microwave, which is to say, vacuously mesmerising.

This is an opportune moment to see if I can upload videos to Blogger.  Never tried it before.
Posted by Monkeychuka at 20:09
Email ThisBlogThis!Share to TwitterShare to FacebookShare to Pinterest
Labels: Armiger, Dark Mechanicum