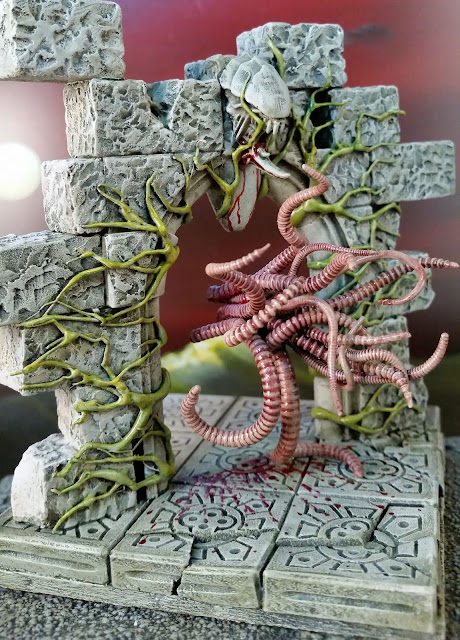 Its already dropped from my list but I'm still pleased with the final result.  I felt duty bound to finish the Portal for fluff reasons as much as anything else.  This is literally my gateway into Kings Of War with Tyranids.  Its a bit of a stretch, claiming that Night-Stalkers are actually creatures of the Hive Mind in disguise.  No worse than the plot of an average Transformers movie though.  Or most modern day blockbusters for that matter.  What was Terminator Genisys but a piss poor excuse to portray a 66 year old Arnold Schwarzenegger as an ageing T-800 infiltrator? 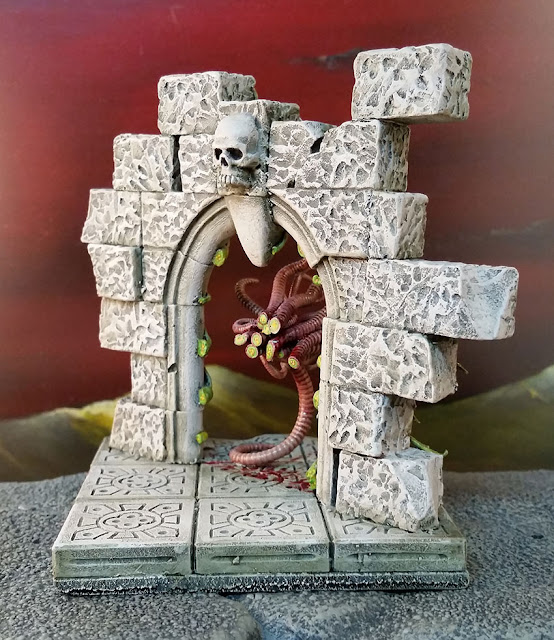 The denizens of Mantica would certainly see Tyranids as the stuff of nightmares from another dimension, that much is plausible.  The actual origin and composition of the army is a bit vague though.  The rules fluff states that the Stalkers are the remains of souls ripped from the world as Oskan was born and scattered across countless dimensions.  In places where reality has thinned and it is possible to cross over, they lurk, desperate to return to Mantica. 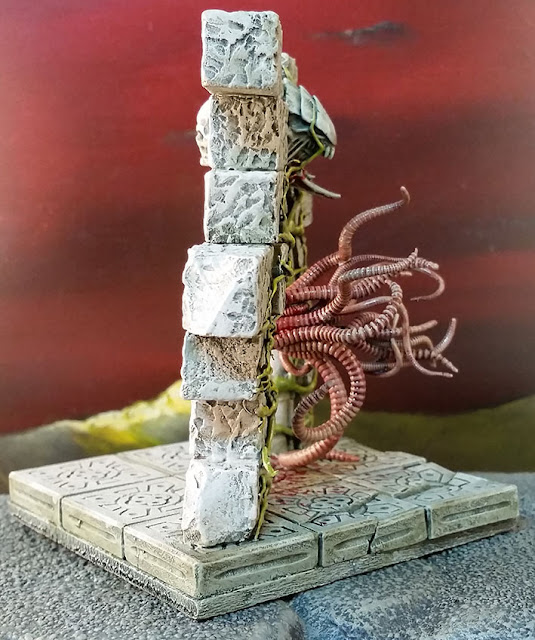 This doesn't sound much like The Great Devourer but it goes on to say that "they take many forms - often perceived by different races in different ways" which basically means that they can look like whatever you want.  It also says "..their feeding frenzy is a terror of death as they frantically try to occupy mortal bodies.." which does sound familiar.  The 'occupying mortal bodies' part is the low tech interpretation of the consumption of host biomass to create new strains of Tyranids. 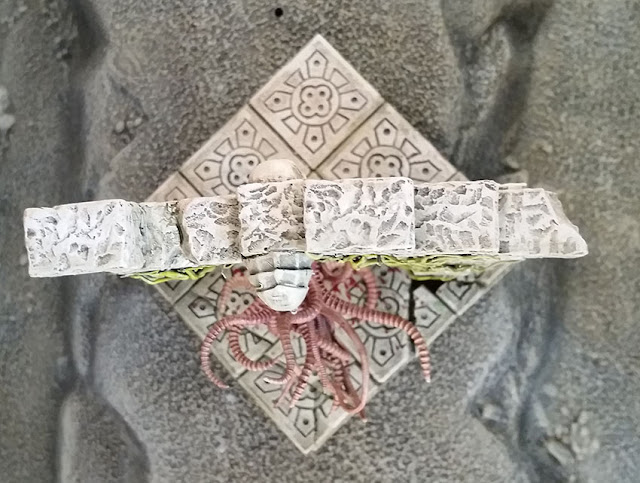 Well thats my story and I'm sticking to it.  Painting the model was pretty easy.  I sealed the plaster blocks with PVA glue first and then just dry brushed shades of grey in gradually lighter colours.  Thinned down green and earthshade washes were applied later and that was pretty much it for the stone work. 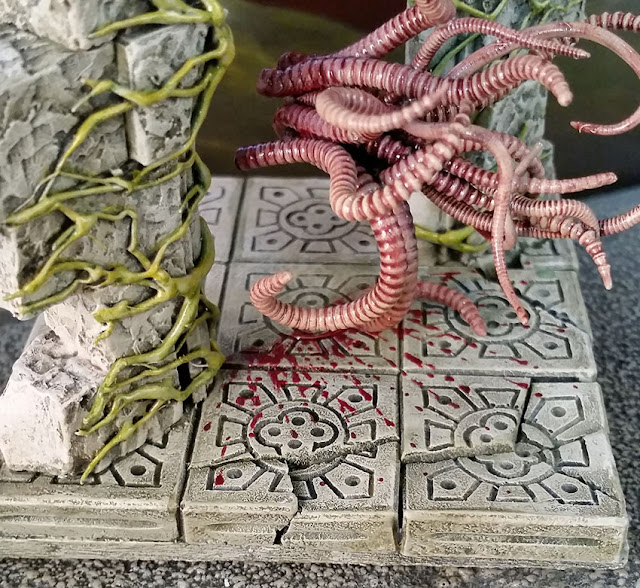 The tentacles were done with my usual Nid painting scheme.   Khorne Red, Cadian Flesh, Ushabti Bone with red and fleshshade washes.  I used a bit of Flayed One Flesh in the last drybrush layer but it was practically indistinguishable from the Ushabti Bone.  Gloss varnish was applied last. 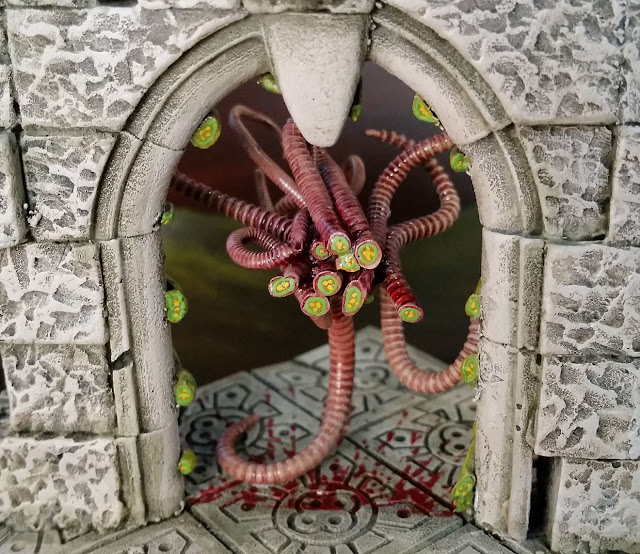 I used bright greens and yellows on the 'cross section' bits where the tentacles pass through the portal into our reality.  I wanted a stark contrast with the pinks to highlight where the invisible threshold is.  I put some Blood for the Blood God in spatters on the ground and dripping out of the mouth of the Carnifex to reinforce the effect.  I'm not thrilled with that but the best colour is 'done'. 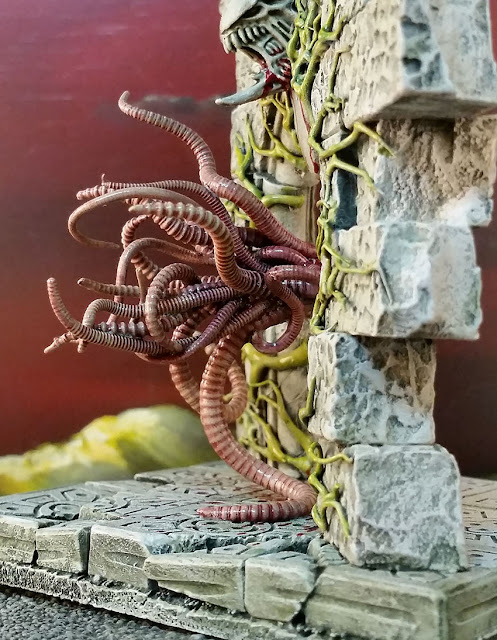 The Tyranid weed creeping along the door frame was a bit different. I used Elysian and Nurgling Green, highlighted with Ushabti Bone.  Standard fare from my Nid colour scheme but the result was too similar to the background stone colour.  So I added a bit of yellow before putting the green wash and varnish coat on. 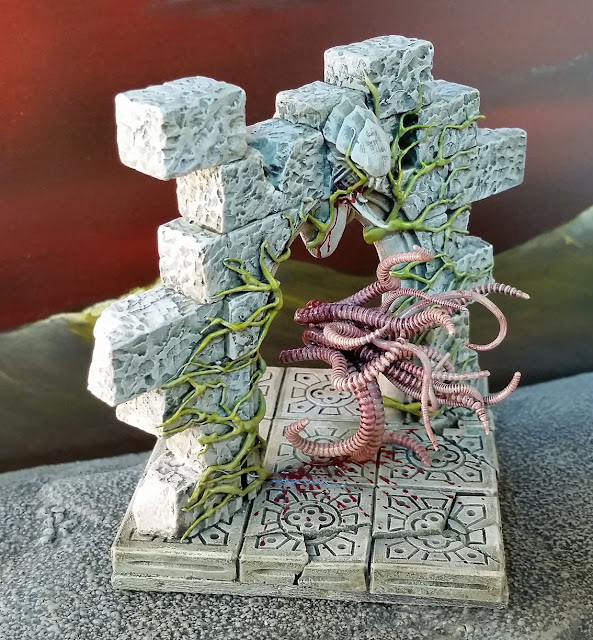 Posted by Monkeychuka at 10:53
Email ThisBlogThis!Share to TwitterShare to FacebookShare to Pinterest
Labels: Fantasy, Kings of War, Night-Stalkers