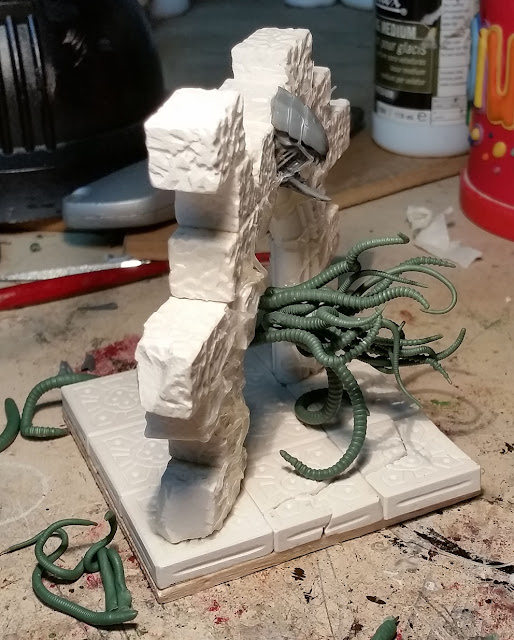 A work colleague (Rob, you know who you are) recently noted that I was a filthy heretic and had started collecting Mantic idols instead of sanctified relics with the seal of The Holy Emperor (i.e. Games Workshop, or is it Citadel?).  His damnable, chaos spawned mind tried to lead me further down the path of temptation.  It turns out that there are a ton of other gaming systems and model companies out there, churning out wargames' rules ranging from free to Kickstarter and models ranging from 8mm to 32mm.  I think his favourite system currently is "Rampant Dragon" or some such stirring title. 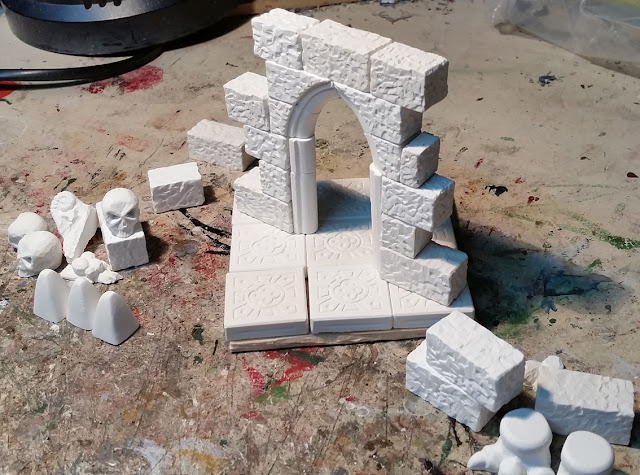 I managed to resist his vile seduction for the most part but it turns out he plays Kings of War too and is also putting together a Nightstalker force.  However, he is slowly building up his army from a plethora of sources rather than being lazy and just using Tyranids.  We were discussing what model to use as a 'Portal of Despair' the only War Engine in the army which gives off a debuff to Nerve values in the opposing force.  I reckoned that I could just use a Tyranid capillary tower or possibly my Comms Relay, but Rob said that he was thinking of building his own out of molded plaster blocks from the Gothic Mold set sold by www.hirstarts.com.  This looks really cool but it sounded like too much work to me so in the end he gifted me some of his own blocks.  Thanks Rob :D 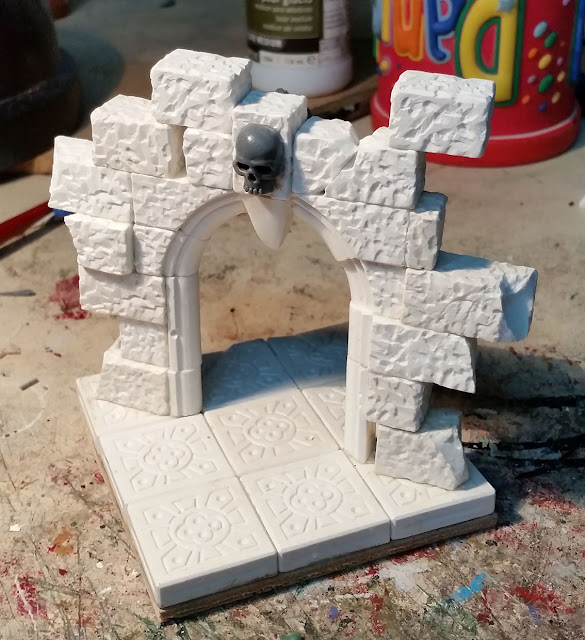 The doorway was widened with the addition of a keystone, decorated with a human skull on one side and a Carnifex head on the other. I deliberately misaligned the blocks and glued them in gravity defying positions.  This was heavily influenced by playing the Doom 3 video game years ago.  I was super excited by the doorways which swirled open, brick by brick.  Ok, looking back at a video of it, they weren't all that super exciting but this was cutting edge graphics back in 2004.  If I remember correctly, my PC nearly had a brain embolism trying to run it on high graphics settings. 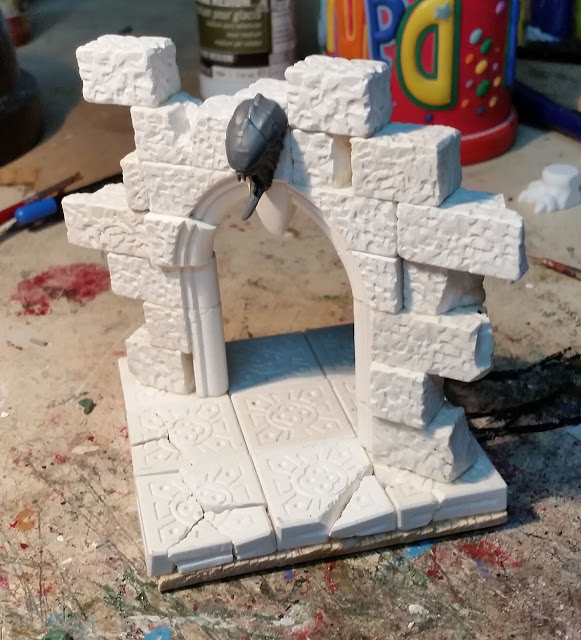 The doorway couldn't be too wide because the rules are very strict about the model sitting on a 75 x75 mm base.  No modelling for advantage here, but I set it diagonally to maximise the width and to hell with my private reservations about a Carnifex not actually being able to fit through it.  This is meant to be a tear in reality, a gaping hole in the natural order, leading to another dimension.  I'm sure it's makers wouldn't be too concerned about obeying the laws of physics. The two sides of the doorway are meant to depict the two sides of reality that they lead to.  A skull on the human side is replaced by a Tyranid beast on the other. 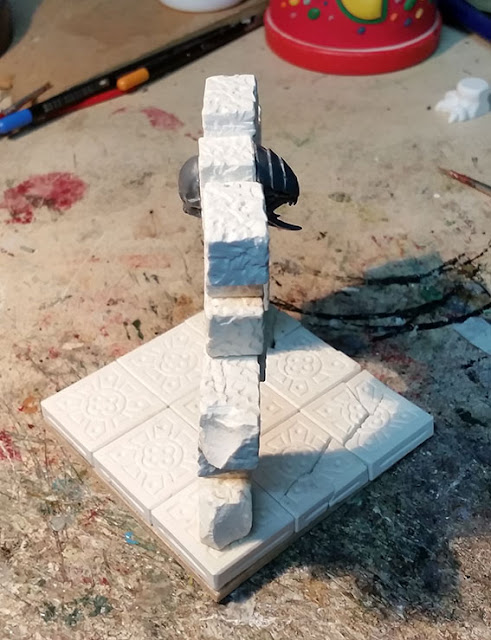 I deliberately split some the flagstones on the Nid side because I wanted a distressed effect and daubed some hot glue tendrils around the frame for added effect.

However this didn't seem like enough and bears no resemblance to the description in the rulebook which states:

"At the edge of vision, the portal seems like a cage of glossy black and writhing serpents screaming in perpetual agony" 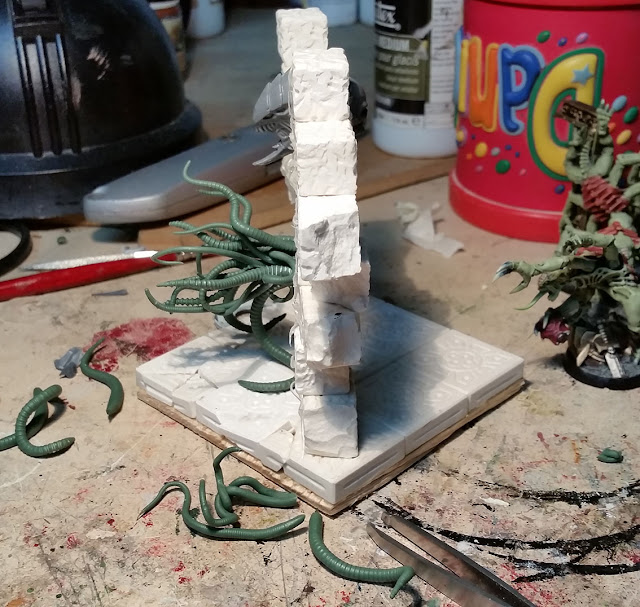 The serpents got me thinking though and I dug out my trusty tentacle maker and set to work.  Going for a sort of 'eldritch horror' look I tried to model a seething knot of tentacles boiling out of thin air. They pass into our existence only at the invisible threshold.  Or something like that. 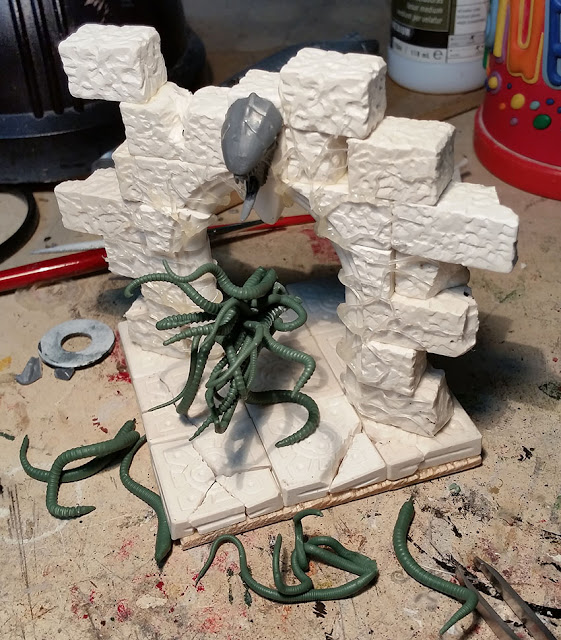 I'm going to donate the spare tentacles to Wryth (assuming he is willing to tell me where he lives) who wants to do something unspeakable in a project with Dark Mechanicus.  Exciting! 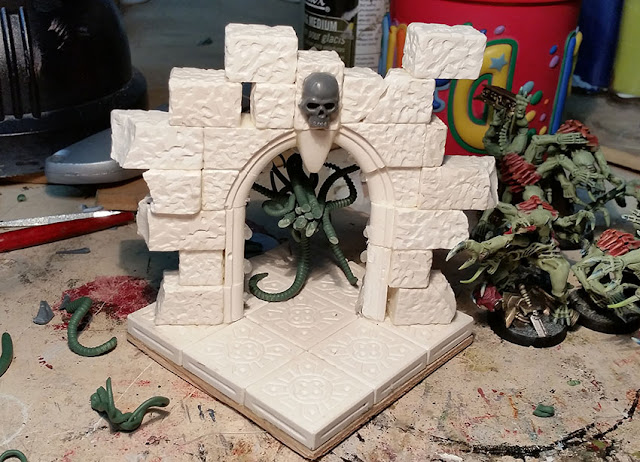 I need to paint this now and some more Dopplegangers/Genestealers for the up and coming KoW tournament on Saturday.

Posted by Monkeychuka at 22:17
Email ThisBlogThis!Share to TwitterShare to FacebookShare to Pinterest
Labels: conversion, Kings of War, Night-Stalkers