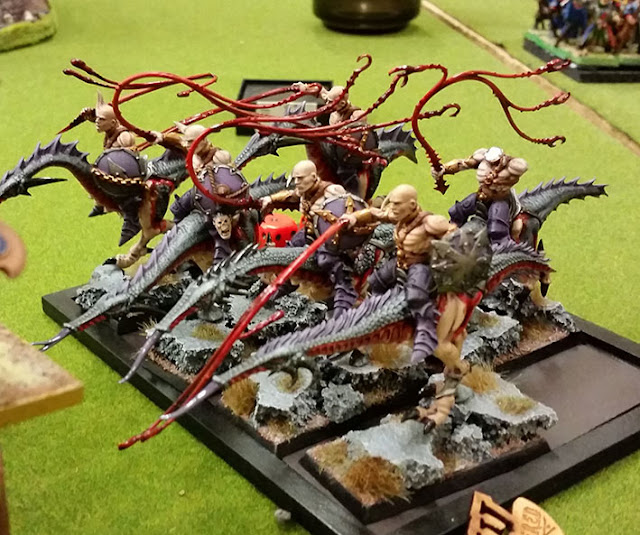 Just got back from the Warlords: Kings of War Super Series 'Spring' Tournament which was a good day out. 1 day event. 4 timed games of KoW. 2 wins 2 losses.  I think I placed 8th which was down to my losses being very heavy and my wins being fairly unconvincing.
Round 1 : vs Undead.  Scenario : Invade.

First up was my old nemesis Ryan Lister.  Ok, thats more or less a complete fabrication.  I've only played him a couple of times before in 40k tournaments and there is no enmity at all between us. He utterly destroyed me using my own weapons last year at Maelstrom VIII but that was just memorable and kind of funny.  Ryan was playing a pretty speedy Undead army with a horde plus 3 regiments of Ghouls.  They aren't that fast however and the 'Invade' scenario totally suits my play style.  I rushed him with Bloodworms and he hadn't spotted that they were toting the Brew of Strength and therefore completely cheesy.  They wreaked havoc and I was able to fly and assault my way across the board very early on.  Since I (kind of) play Undead too I knew that a lot of his army was very brittle.  I don't think I've ever beaten Ryan before but I didn't take any pictures of this historic event, so apologies Ryan, I put it down to opening night nerves.

Second game was against Tane Woodley and his Dwarven stalwarts.  I really must learn some tactics when playing Dwarves.  Running pell-mell at a wall of Defence 6 is not a tactic.  The stunty fellas just stand there and take it.  Come at me bro.  Its not even like he was unit spamming or power listing.  His force was entirely in keeping with the Dwarf persona: obstinate and sheathed head to foot in plate armour.  The scenario suited him too. He slowly advanced his wall of steel (and crystal. He was using elementals too) towards the centre whilst peppering me with crossbowmen.  He only broke formation to send his flying King and Brock Riders in to block and smash my left flank.  My main assault just bounced off him. The second wave were hemmed in by the reeling first wave and just stood there milling about in confusion.  Note to self: Full frontal assault vs. Dwarves = bad.

I need to learn to be patient and wait for an opportune moment with my cavalry/flyers.   Fortunately thats exactly what I did in my next game against Sam Whitt.  We were playing loot and I resisted the urge to grab the loot counters right off the bat, ghosting my flyers up the exposed left flank.  They didn't get their assaults off until turn 2 and 3 but were far more effective.  I also stayed well away from his ranged artillery where possible and actually utilised cover.  He had some pretty nasty shooting but initially chose to focus fire my Terror which survived the onslaught and then regenerated 10 wounds the next turn. Pretty lucky for me and Sam also underestimated my Bloodworms (they are not a tarpit unit, despite appearances) who managed to take out his Bloodsworn horde.  This left him with no real anvil units and low nerve values in the rest of his force meant that I did well by playing aggressively, picking up the loot counters on the way.


Round 4 : vs Nightstalkers. Scenario : Pillage

I was feeling pretty good going into my last game against Rex Foote.  I had beaten him in our last encounter and this was a mirror match, Stalkers vs. Stalkers so I thought I knew exactly what I was facing.  The objectives were evenly distributed.  Patience and cagey play were my new watchwords.  Rex however could give lessons in cagey play and he had one good advantage over me:  3 units of Screamers with Lightning Bolt (5).  You can be as cagey as you like when you have the firepower to delete one unit of Reapers/Nightmares per turn.  If you don't have any ranged firepower at all on the other hand (as with yours truly) then your options are much more limited.  So I lost my cool early on thinking that I could not sit back and bide my time.  I reverted to form and ran at him.  He got to pick and choose his charges as a result and gave me a good pummelling.  He also demonstrated how to play Doppelgangers properly.  One unit of my Reapers survived by running away.


The best general was Jayden Howell with his ingenious new Goblin army.  A nice comeback.  Last time I saw him he had just dropped and smashed every single Samurai model in his list at the KoW 'Autumn' event.  It was so badly damaged that the army was unplayable (except as a bunch of movement trays).  Being such a catastrophic event, he didn't bother putting them back together again and just built an entirely new force.

I won Best Presented Army playing my Stealth Mawloc as a Terror. I tarted up my Fiends a bit and used Swarmy as my Void Lurker this time round.  Putting boneswords on a Flyrant is more appropriate in a fantasy setting and looks cool.  I've never won Best Army in a fantasy tournament before so this was a bit of a milestone for me.  I'm still a dirty cheater for taking Tyranids however and I will endeavour to finish painting a fully playable Undead army for the next KoW .

So there you have it.  I'll try a balanced army next.  A bit of fast cavalry, some damage soaking infantry, ranged firepower and the odd flyer for emergencies.  It will probably end up being mediocre and ineffective in all those areas but I'll give it a go.  I can't rely on cheesy Bloodworms forever.
Posted by Monkeychuka at 23:11
Email ThisBlogThis!Share to TwitterShare to FacebookShare to Pinterest
Labels: Fantasy, Kings of War, Tournament