Rise up you dead, slain of the hydra 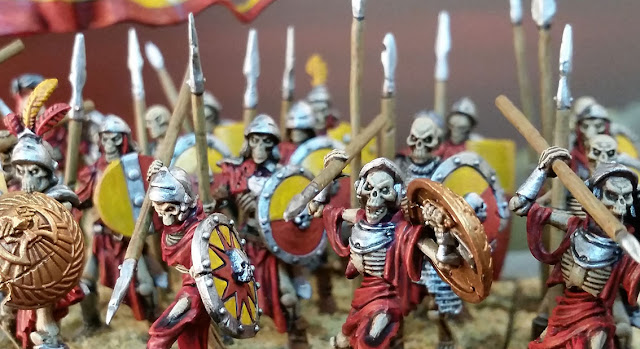 I reckon it was Jason and the Argonauts that first made me realise skeletons were cool.  When I first saw it as a six year old boy I was deeply impressed. The 'teeth of the hydra' scene kept me awake well into the night.  That brazen soundtrack and the way they burst up out of the earth, utterly implacable and death incarnate still gives me a thrill now. 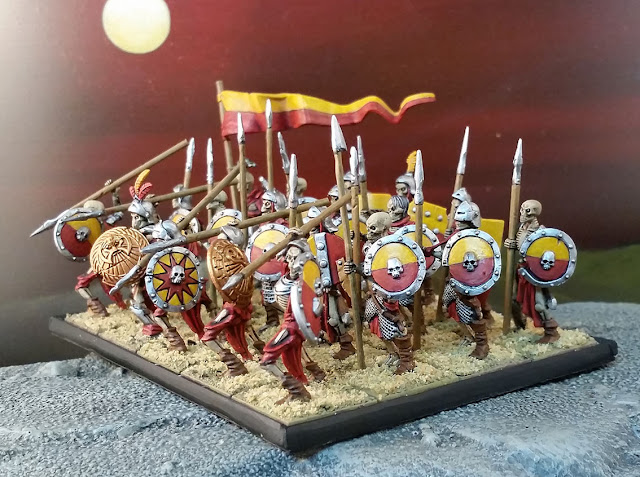 If you haven't seen the skeleton scene, you should definitely give it a go:


In my second batch of Mantic skeletons, I steered well clear of the Revenant armour and cut all the shields off.  I had a ton of Tomb Kings shields left over from building a skeleton archer horde, but they were 'wall' shields and I didn't much like them either. 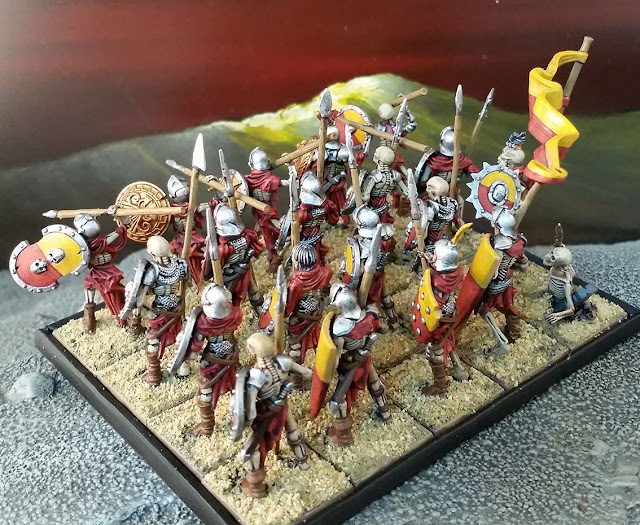 So I cut those up too and made some large bucklers out of them instead, mixing in some Dwarven shields and a couple of Elf ones I think.  I wanted a spearmen regiment so naturally they are equipped with spears only except the standard bearer who is wielding a Witch Elf banner.  They look much more like Ray Harryhausen's now (I am not worthy to compare my stuff to his but took inspiration from it). 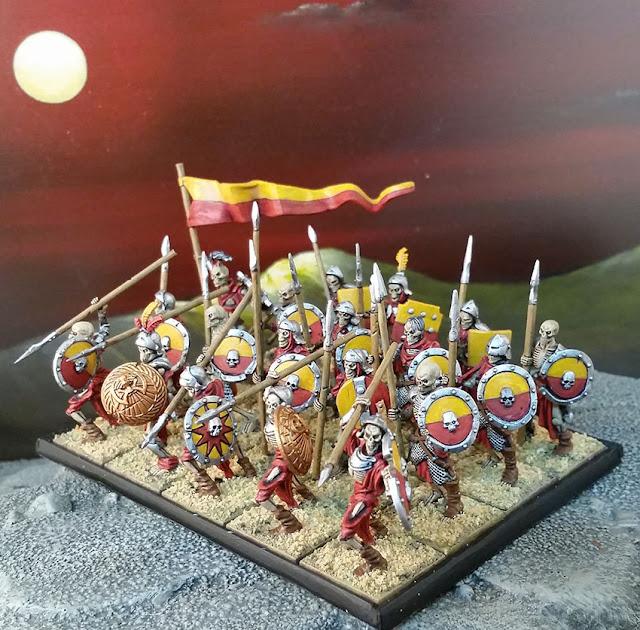 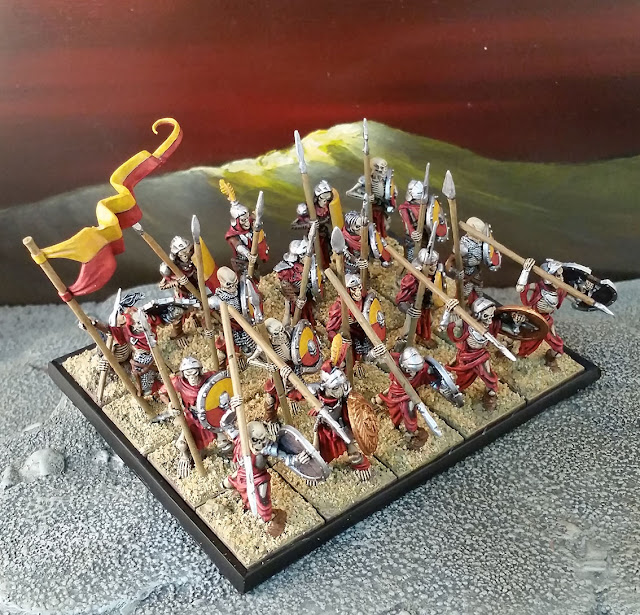 However, I'm still not sure if I like GW skeletons more.  Mantic skeletons are more in proportion but less posable.  They seem more realistic to me but the heroic scale of GW has a charm of it's own and has better defined detail.  They probably stand out more on the tabletop but they look cartoonish whereas the Mantic versions are definitely more sinister.  Oh well, I'll just have to keep buying both versions.  You can't mix them in the same unit though, they are too different (imho). 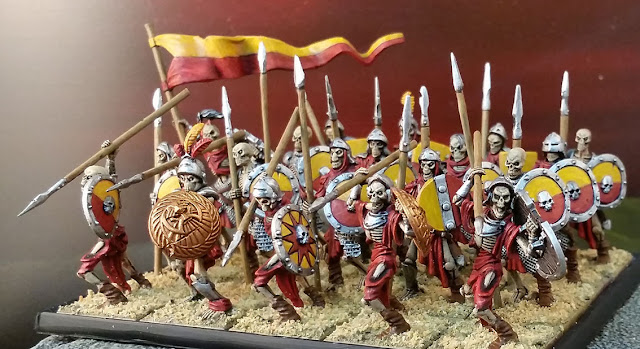 When I paint the archers I'll do a side by side comparison.  Not very original but I think Mantic gets a fairly bad press and a lot of their stuff isn't terrible.  Yes, GW generally makes better models but I've found a couple of exceptions (Mantic zombies take the piss out of GW ones as far as I'm concerned and Ghouls are arguably better too.  That kit needs updating GW) but Mantic models are significantly cheaper.  The entry price into rank and file fantasy armies was so high that it put me off for years.  The Mega Army bundles from Mantic (and the Start Collecting boxes from GW to be fair) make it much more palatable. 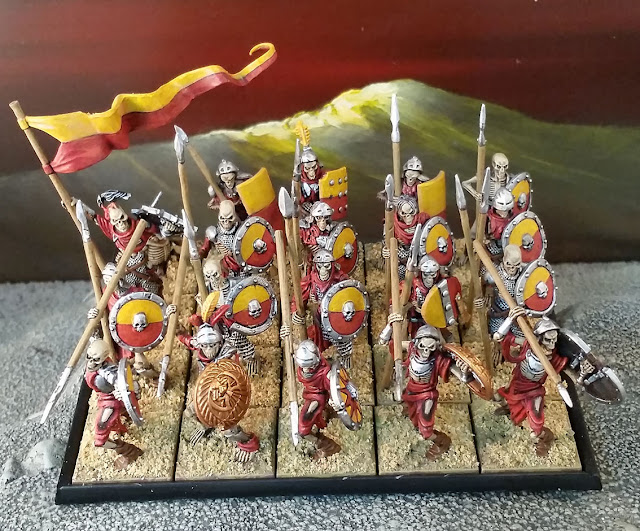 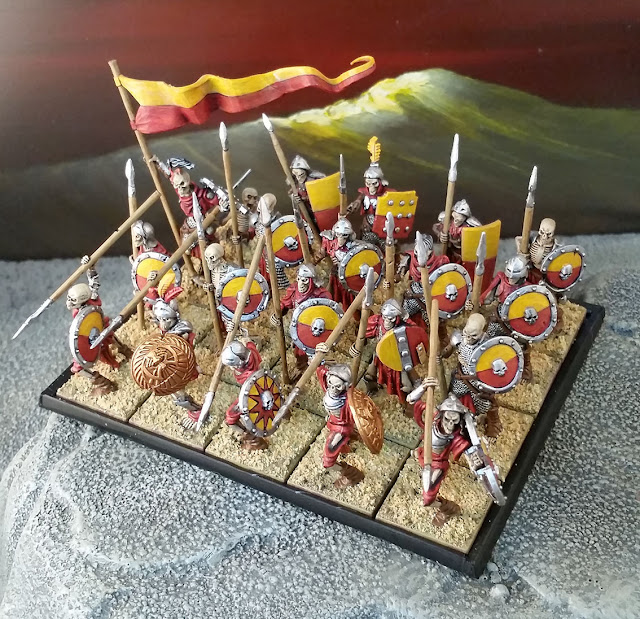 Posted by Monkeychuka at 23:30
Email ThisBlogThis!Share to TwitterShare to FacebookShare to Pinterest
Labels: Fantasy, Kings of War